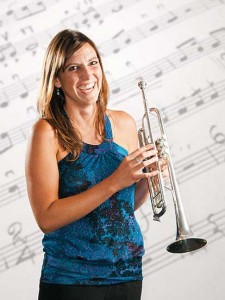 Someday, the kids of Broomfield Academy will grow into adults, and if things go as Sarah Kleinsteiber plans, they will have a heady appreciation for music.

“I just hope they look back, and say, ‘Ms. K taught me how to play trumpet,’” she said, sitting in a Broomfield coffee shop. Her face lights up at the thought of being remembered as a musical influence in her students’ eyes. “How cool is that?”

Cool indeed. Kleinsteiber herself has warm memories of learning music as a child, playing the trumpet and traveling with her school band and show choir. She fondly remembers the high school teacher who asked if she had ever thought about becoming a music teacher. She hadn’t before, but the words resonated.

“I was fascinated with instruments,” she said. “The idea that you went to college to be a music teacher and got to learn how to play all instruments? I would get to do that? It was great. And I got to do it, and now I get to teach them all.”

Broomfield Academy scooped Kleinsteiber up after she graduated, and she’s spent the last four years finding innovative ways to create musical and theatrical passion within her second- through eighth-grade students.

“We don’t have to follow public school curriculum, so I had to ask myself the question: What do I want these kids to get out of school?” she said. “And for me it’s that they come out of school loving music and feeling confident in their ability to express themselves through music or drama.”

That’s allowed her to bring unique programs like “recorder karate” to teach the little ones about the infamous recorder, a blues history project—in which students write their own blues songs, record it and post it on YouTube for their parents to see—and a new band curriculum that allows kids to track practices and play along with music online. As the school’s drama teacher, she also keeps her students active and creative with improv games and musical productions.

But her impact on the school has gone beyond music and theater. Kleinsteiber started Broomfield Academy’s kids capoeira club (capoeira is a Brazilian martial art that uses both dance and music). She developed an “au-a-thon;” the capoeira term for cartwheel is “au.” Students received sponsors for how many cartwheels they could do as a part of a service-learning project.

“Even kids who couldn’t do cartwheels were throwing themselves around the field,” she laughed.

And this year, Kleinsteiber and another teacher held a kids triathlon to raise funds for a day camp in Estes Park. She’s working on her yoga teacher certification, and she plans on starting yoga programming at the school.

“Especially with more TV and video games, when the world has become more sedentary, it’s about giving them more opportunities to move and use their bodies, to create things with their bodies and to be creative and think for themselves,” she said. “Plus, when you look at theater, you act on stage, but you also sing, dance or tumble. Those are all the things I loved. To keep learning about them, to share the excitement, and for them to fall in love with them too, that’s pretty awesome.”