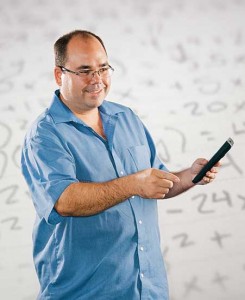 Michael Schefferstein doesn’t believe he can instill passion for math in the students at Justice High School in Lafayette.

“I can motivate them. I can make it fun, and I can help them have pride in their work,” he said. “Maybe, with time, that will give them passion.”

He knows full well that his students probably won’t use pi or tangent in their adult lives, but Schefferstein says if they feel confident enough with their math skills in his class, they’re more likely to think about college. The high school math teacher does his best to inspire his students to take pride in their work.

Schefferstein has worked at Justice since it opened in 2004. He teaches math for each grade level, including a senior-level calculus class. He’s taught science, science fiction and mythology. He’s the science bowl coach. He’s the school’s IT specialist, assessment coordinator and registrar. He’s also the unofficial “data guy.”

Schefferstein says multi-tasking is just part of life at Justice—a small charter school that provides a college-prep education to at-risk youth. But it also says a lot about who he is.

“I’ve been here since the beginning, so as teachers have come and gone, I tend to pick up their responsibilities,” he said.

Schefferstein also teaches at CU, which is a stark contrast to being at Justice. His college students often come from middle to upper class families. They have tools at their disposal, and they have confidence in their school work. At Justice, most of his students have not focused on education. They have fewer resources behind them.

“Because they are coming from such a different background, the difference you can make is substantial,” he said. “Justice High gives me a bigger reward because I can make a bigger difference.”

While he has students with gang affiliations and violent histories, Schefferstein says he focuses foremost on showing respect for his students.

It sets a tone in the classroom. He then works to make the lessons interactive, involved and fun. He wants his classroom to be a social, positive place. He turns math lessons into games, and he gives out prizes. “I’m not above bribing them,” he said with a smile.

Schefferstein challenges his students and makes sure they know that if they are doing well in his class, they can handle college math.

“I’ll have them do a math problem, and I’ll say, ‘That wasn’t so bad, right?’” he said. “Then I’ll show them that it’s the same problem I gave my college class.”

College is the ultimate goal. Schefferstein keeps data on where his students are—how many are in college, how many have graduated, how many are working toward a master’s degree. His current students know he’ll plot their successes. That continues to inspires pride.

Motivating students to pursue college is a process. It’s even more of a challenge when you realize he sees his students only about 40 hours over a school year.