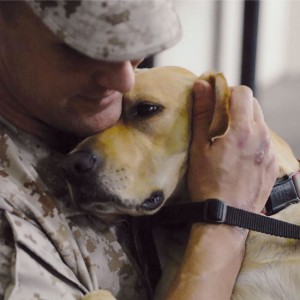 Pairing service dogs with injured U.S. veterans is nothing new. Man’s (and woman’s) best friends have long been trained to act as an extra pair of eyes, ears, feet and hands for people with serious injuries and disabilities. For those wounded in combat, a service dog can help with their mobility, their independence, and their transition back to civilian life, which can be all the harder when that transition involves a wheelchair or prosthetic limbs.

But in the past few years, dogs have been used to help people suffering from combat injuries that are not so easy to see — post traumatic stress disorder (PTSD) and traumatic brain injuries (TBI). According to the Veterans Administration’s National Center for PTSD, 30-40 percent of combat veterans have or may develop PTSD, a condition that is marked by depression, flashbacks, nightmares and anxiety. People with PTSD can feel vulnerable in crowds, are often hyper-vigilent and may be suicidal. Similarly, around 15-22 percent of veterans who’ve fought in Iraq and Afghanistan suffer from some form of TBI as a result of explosions, vehicle accidents and other head injuries. Those with TBI can have a broad range of symptoms, from mood changes and depression to light sensitivity and debilitating headaches.

Only recently have organizations that train service dogs begun to see how these specially-trained companions can assist vets with PTSD and TBI.

“Those dogs will do things like ‘post and block,’ which is either get in front of the soldier or behind the soldier so that people can’t get too close. It also feels like their back is protected, so that if someone comes up behind them, the dog is there,” says Sharan Wilson, the executive director of Freedom Service Dogs in Englewood, one of only a handful of organizations in the United States accredited by Assistance Dogs International to train dogs to help with PTSD and TBI. “They can bring them out of night terrors, either by putting their paw on them or by licking their face. We have one dog whose soldier will scream and scream and scream but he really won’t wake up; his dog will flip the light on, jump up on the bed beside him and do a settle command, which is push his body as close as he can to the soldier’s. Then the soldier’s breathing starts matching the dog’s and he doesn’t even wake up.”

Some dogs, like the soldiers to whom they’re assigned, have gone above and beyond the call of duty. According to an article on the website Mother Nature Network, Army Specialist David Bandrowsky attempted suicide, but his service dog, Benny, knocked a pistol out of his hands. Benny wasn’t trained for that situation, but he knew what to do.

“They are amazing dogs,” Wilson said.

Freedom Service Dogs has been providing these therapeutic companions to veterans for 25 years, but the focus has been on animals that can perform more common tasks like turning on the lights, opening doors and guiding their partner through the grocery store. Utilizing them for harder-to-quantify tasks, like providing comfort and aid for those suffering from emotional trauma and brain injuries, is an outgrowth of their work with autistic patients.

“A lot of the skill sets that we have been teaching for autistic kids have come over for post traumatic stress disorder,” Wilson said. “But there aren’t very many dog organizations that are [training for] PTSD … because it’s very difficult. You’re putting a living animal in a home with a person with mental health issues. There’s a lot of risk that you have to make sure you mitigate, so we screen really, really closely. A dog can’t help everyone. If you still have such anger management issues that you can’t control that, we’re not going to put a dog there. A dog in some instances might be able to help you, but in other instances the dog might be in danger, so that wouldn’t work.

“And if you have TBI to such a degree that you have no cognitive ability, or you can’t do the commands or you forget to feed the dog, things like that, then we can’t place in that situation,” she said.

Wilson said there are a lot of trainers popping up who—well-intentioned or not—purport to provide PTSD dogs but which may not be trained in public access skills required of service dogs under the Americans with Disabilities Act. If the dog isn’t trained to behave in, say, a restaurant, any chaos that might result could exacerbate a patient’s PTSD.

For these reasons and others, the U.S. Army has adopted a strict policy limiting where the dogs allowed on military bases have come from. The Army requires that soldiers only get dogs from one of the organizations accredited through Assistance Dogs International, which sets the standard for training requirements. Unfortunately, demand has far outstripped the supply. There are no ADI-accredited organizations in 18 states and only six organizations nationwide, including Freedom Service Dogs, are certified specifically to provide PTSD and TBI dogs.

All of the dogs at Freedom Service Dogs have been rescued from animal shelters. They spend about a year being trained in specialized skills while staff members work with Fort Carson’s Wounded Warrior Battalion to match them with clients who’ve been carefully screened to determine if they qualify for the program. Once a soldier is paired with a dog, a Freedom Service Dog trainer works with them for a couple of weeks, putting the dog’s skills to the test in public and private. The dogs are re-certified annually, and the organization considers its commitment to the dog/soldier partnership to be lifelong.

Because of the intense level of training and follow up, the dogs are enormously expensive, costing Freedom Service Dogs about $25,000 each. But proudly citing what she calls “the worst business model in the world,” Wilson says the dogs are provided to their soldiers free of charge.

“It’s a very expensive product that we give away,” she said. “Every year, we have to raise every penny that goes to making this happen. The number of people we can help is totally dependent on how much money we can raise to do that. This year, we’re hoping to raise enough to do 35 client/dog teams but we have 64 still on our waiting list. The need is far, far, far higher than the ability we have to do it.”

It’s not a pet

Your dog might know some good tricks and make you feel better when you’re anxious or stressed, but don’t mistake your pet for a service animal or vice versa. Service dogs are working dogs with specific tasks to do and their specialized training and registration give them obvious advantages over pets. For one thing, the Americans with Disabilities Act allows service dogs into places where most pets just can’t go, such as restaurants, movie theaters and the cabins of airplanes.

Sharan Wilson, the executive director of Freedom Service Dogs of Englewood, says that while pets can provide love and companionship, the fact that they’re largely homebound limits their usefulness to people suffering from PTSD whose triggers exist outside the home. Service dogs are not only trained to behave better in public than your everyday pet, they’re trained to identify things that could upset their partners. For instance, many people with PTSD become anxious in crowds; service dogs can steer them away from large groups or even respond to hand signals from their handler to lead them to a quiet place where they can regroup if things get overwhelming.

Although there’s a long line of applicants for a trained PTSD dog from Freedom Service Dogs, it’s worth the wait. As one of the few organizations in the country accredited through Assistance Dogs International, their dogs are the real deal. And they’re free. Wilson says those who are looking for a service dog for PTSD should be wary of non-ADI trainers and those who seek to sell the animals to the patient.

For more information—as well as to download an application or to make a donation—see freedomservicedogs.org.