How To Cook a Delicious Turkey 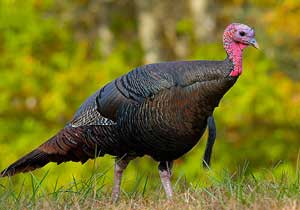 For good or bad, most of us have at least attempted to cook a turkey. But Phil Goddard and his crew at the Greenbriar Inn have cooked more than their fair share of Thanksgiving feasts.

“It’s the Greenbriar’s 45th year as a restaurant, and we’ve been doing turkeys all 45,” Goddard said.

Each Thanksgiving, the restaurant’s cooks prepare 30 to 38 turkeys on a large rotisserie; they pull off the drums and legs and stuff them with turkey and homemade sausage and serve it all with an apple-cranberry pear sauce. It’s quite an undertaking, but the effort is all about tradition. Here’s how they do it:

Brine: Brining comes in and out of vogue on a regular basis, but regardless of what’s popular, Goddard urges everyone to soak their bird in a mixture of water, salt, a bit of sugar and some spices or herbs for 6 to 12 hours before cooking. “It cleans up the flavor in the meat. It makes it a bit more succulent,” Goddard said.

Tip: Remove the excess fat inside the bird.

Prep: Drain and wash the bird. The folks at Greenbriar make a rub with butter and herbs and slather it under the skin, outside the bird and inside. If you are not doing a stuffing, include citrus inside the bird: half a lemon, half a lime and half an orange.

Tip: Don’t get the oven too hot. You want to go low and slow.

Cook: Cover the bird with tin foil to help keep it moist (uncover at the end of cooking). Goddard prefers a slow roast with the oven at around 350 degrees (at the restaurant, he’ll turn it down to 325 degrees for the second half of cooking). Baste the turkey with its own juices throughout cooking. Cook until the bird’s internal temperature is 165 degrees.

Tip: Purchase a turkey roasting pan, so that the bird isn’t sitting in it’s own juices, getting soggy.

How to Buy Wines for Thanksgiving

How to Bake a Yummy Pie