You get a better workout if you have a partner, and I have the perfect one: eager to climb walls many times her size, always up for a soccer game and ready to explore any ravine or creek she comes across. The only downside is we have to make sure we’re home in time for afternoon naps.

My exercise partner is my 3-year-old niece we call Noodle. I babysit Noddle occasionally while her parents are at work. As for the aforementioned afternoon nap? That’s for me.

Taking care of kids feels like such good exercise that after a 10-hour stretch, I always feel like I broke the record at the Berlin marathon while carrying Biggie Smalls on my back. And yet parents often struggle to stay fit. For my brother and his wife, it has been a battle to lose the baby weight. No matter what—Diet Cokes instead of regular, skipping dessert—there’s still the big, round belly that, from certain angles, makes it look like my brother is still pregnant. (His wife looks great.) 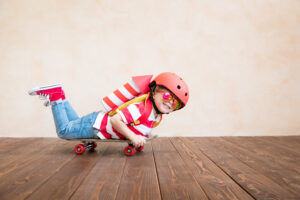 But why? When all he does is run around after Noodle and her big sister? Why doesn’t carrying 25 pounds of cuteness everywhere help him carry less weight? And could it? Could being a parent be enough exercise for a person?

In my continuing quest to try to avoid the gym and get exercise in my everyday life, I decided to keep track of how much I do during a normal day with Noodle.

How many calories do I burn? How many miles do I walk or jog? Is it like a workout at the Y?

Noodle stinks at keeping track of things, so I bought a fancy contraption that would keep track of things for us: a chest strap that measures my heart rate and a dongle on my smart phone that measures speed, elevation change and calories burned. It also affords me the opportunity to ask people if they’d “like to see my dongle?”

The results were surprising.

We went hard that day: exploring a ravine, foot-racing in the backyard, chasing a pesky rabbit and playing catch and soccer.

Though she has her own methods, Noodle is a sportswoman. She likes to throw the soccer ball and kick the baseball. I protest, try to straighten her out, but she’s like General Patton in rainbow pajamas, demanding that the baseball be kicked. “If you don’t kick it, you don’t get the prize.” The prize is a pink flower Jamboree dress, size 3T. Not really my taste, but hard to resist.

I tried to get cardio, determined to get exercise in exurbia: throwing Noodle up in the air, racing her around the house like Supergirl, saying yes whenever she cried “again! again!”

We spent a couple of hours clambering on the playsets at Monkey Bizness in Westminster, which is heaven for a 3-year-old. “They have everything here,” Noodle said. While the other moms checked their phones in the care, I got in there, got sweaty, rode whichever slides my butt wasn’t too fat for, bounced in the bouncy castle, and generally acted like a giant toddler.

Tired? By 3 p.m., I was begging Noodle: “You sure you don’t want to watch some cartoons?” She did not. She wanted to race more.

So, how much exercise got done? Spectacular amounts, right? Tour de France levels? Well, here is the grand total according to the dongle: I moved one-third of a mile, gained 0 feet in elevation, and burned 617 calories.

Wha? That’s the exercise regimen of an anemic octogenarian. I know dead people who move more than that.

This is surely an under-count. The dongle kept falling off the phone and disrupting it. And it didn’t count all the little moves: lifting her up, picking up her blanket, etc. But, still, even if I did 10 times that, it’s not much.

So why was I so tired?

“You’re mentally exhausted, probably,” says Robert Mazzeo, a professor in the Department of Integrative Physiology at the University of Colorado Boulder who studies exercise.

Almost none of what I did with Noodle, he says, was the kind of exercise adults need.

“At a minimum, they say you need 20 minutes of continuous exercise, at an elevated heart rate,” Mazzeo says. “Picking up her blanket, putting her on the counter, is what, five, 10 seconds? Even if you’re playing soccer for three-four minutes and the kid gets distracted, there’s not really much there.”

It’s the stress that wears you out, Mazzeo says. This was borne out by the heart rate monitor, which showed how much each situation vexed me.

From a base rate of about 70, my heart rate accelerated to 81 when Noodle and I were butting heads over whether she had to put something on her butt before she left the house. (She has strong feelings on pants: doesn’t like ‘em.)

It jumped to 100 trying to pick up her 6-year-old sister from school, when I was admonished for driving in from the WEST instead of from the EAST, like only drooling morons do. And then, after waiting in the carpool line with hundreds of other parents for 30 minutes with a screaming Noodle melting down in the back seat, demanding snacks I forgot to bring and games I didn’t have, we got out of the car — firmly against the rules — and just walked to the school. My heart rate jumped again to 110 when the school secretary, seeing my sweat-drenched brow and wrinkled shirt, clearly recognized that I am not a person who should be in charge of small children on a Monday afternoon, that everything about me screams “partial custody.” The heartbeat faster when she asked to see a driver’s license, then called the girl’s mother at work to see if I was “on the list,” certain that I was a ruthless kidnapper and not just an incompetent uncle. And my heart rate jumped to approximately 3,632 when, feeling flummoxed, I bickered immaturely with the school secretary, saying, “Isn’t this all a little much, for simply picking up a child from a school? Are you sure you got enough from me? Don’t you want to do a polygraph? Take some DNA? Before you ‘release’ my niece to me, can you cut off her ankle bracelet?” And then, heart racing and sweating even more, I was politely asked to leave the building. After which I had to go lie down.

And it’s not just about movement. One contributor to weight gain, Mazzeo says, is lack of sleep, and parents do not get much of it. “For some reason, people consume more food when they get disruptive sleep,” he says.

So how and when is sleep supposed to happen?

The experiment was a failure. Taking care of a 3-year-old is exhausting, but it doesn’t do much to make you physically healthy. It might make you mentally healthy—Noodle and her sister make me happy—but it’s no substitute for going to the gym.

“Regular exercise can really have beneficial effects,” Mazzeo says. “If you want to have health benefits, you have to find 20 minutes a few times a week to exercise. It’s well worth it if you can squeeze it in.”