It’s not a story you’d likely find backdropped by the Flatirons near the manicured walkway of Pearl Street. It’s not a story you’d find down the road in Longmont either, or in Old Town Lafayette amidst the fallen foliage and quaint shops. Instead, it’s a story found too often in another country of a woman, desperate, homeless and protecting her child—a little girl cast out because she was born deaf. Teddy Namuyiga’s story is a happy one. But it wasn’t at first.
“Her husband didn’t want the child,” Amy Yanda Lee recounts with a dour smile. “He wanted her to take her to the orphanage. So, Teddy left him.” Lee is the communications director for BeadforLife, a nonprofit, fair-trade organization based out of Boulder. In her windowed office on Canyon Boulevard, Lee explains why BeadforLife was looking for women like Teddy in the first place. “Many of the women in Uganda make about one dollar a day, so we created an organization to seek out and help extremely impoverished women there to earn an income.” 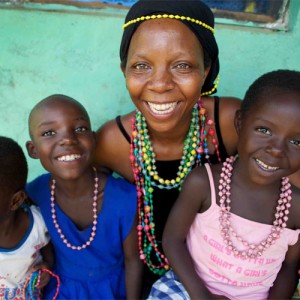 The namesake itself comes from the workings of women. It began while co-founder and Boulder local, Torkin Wakefield, was visiting a Ugandan slum and saw a woman making beads out of tightly wound paper. What grew from that was a fair trade situation that has since evolved into a school that teaches Ugandan women how to own their own business and thus their own future. And Teddy was one of them.
Like everyone in the 18-month program, Teddy was taught how to make beads, then sold them at a bid hosted by BeadforLife. The best jewelry makes the most money—half of which is given to the women up front and the other half put into their accounts for future professional endeavors. As that money collects, the women attend classes where they’re trained in basic business practices.
Today Teddy, whose daughter attends the only school for deaf in the country, is now considered “fancy” by local standards. The owner of four businesses, one of which houses 400 chickens, is described as a “spitfire,” refusing her husband’s apologies as he tries to get back in her good graces.
The beads that got Teddy to where she is today are the same being sold in BeadforLife’s office studio at 2336 Canyon Boulevard. On the tightly wound paper that forms each one, are the stories of thousands of women, 71 percent of whom start businesses while in the program: 10,000 total.
While America’s abundance must have seemed foreign to Teddy when she visited Boulder last spring to tell her story, she used her experience as a springboard to create new business endeavors back home. And while the abundance of these stories won’t likely be found on the streets of Boulder County, this is where they’re being told, and this is where lives are being changed for the telling.