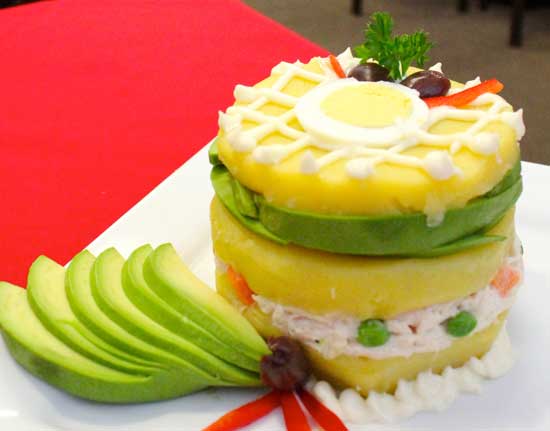 With school starting in T-minus a few days, we began to think about those all-important brain foods. Foods that increase brain function and have the ability to actually make you smarter. Foods that eliminate the need for last minute cramming before third period geometry. Good or bad, everything we eat—kids included—greatly influences everyday brain skills, but the benefits of avocado tend to get lost in all the hype about eating salmon and berries and whole grains. Looking to give the leathery-skinned fruit its due credit, Rosario’s restaurant in Longmont accepted the challenge of creating impressive dishes that utilize avocado. (They passed the test.)

Rosario prepared two traditional Peruvian appetizers for our lunch, but started by serving us a drink native to the country: Chicha Morada. The sweet Peruvian beverage gets its dark color from purple corn that is boiled with pineapple. Added to this is cinnamon, clove, sugar, and Rosario adds lime to her version. The cinnamon and lime dominated the flavor, and it’s reminiscent of a less-sweet horchata; a good refresher on late summer days.

The first appetizer was comprised of layers of potato, shredded chicken and slices of avocado. Binding the chicken together was a light mayonnaise-like sauce that complemented the avocado. For a bit of heat, Rosario mixed in aji amarillo (a chile long associated with Peruvian cuisine) to the skinless potatoes. A colorful dish that’s a little spicy, it is enough to serve as a full entrée on its own.

For more of a salad, the second appetizer that Rosario made blended quinoa with diced avocado and tomato in a balsamic vinegar reduction. “You’re going to enjoy this one a lot,” said Rosario, knowing from our wide eyes that she’d be right. This second dish is perfect for hot weather when heavy foods aren’t very appetizing. As a bonus, Rosario incorporated another smart food with the avocado: quinoa. The supergrain originates from the Andean region—where Peru is, naturally—and dates back to when the Incas discovered it was fit for humans to eat. They believed quinoa increased the stamina of their warriors, and it definitely isn’t a bad thing to have more of with its plethora of iron, amino acids, manganese and lysine (helps with tissue repair—good for warriors).

Avocado can be a little intimidating because, well, it’s fatty. But it’s important to realize that the fat is monounsaturated, which contributes to healthy blood flow, and you know what that means: a healthy brain. Enjoying the creamy fruit in moderation, such as in the dishes that Rosario prepares at her Peruvian restaurant, limits the calories (and increases the benefits) you take in.