Learning the Rules of the Playground 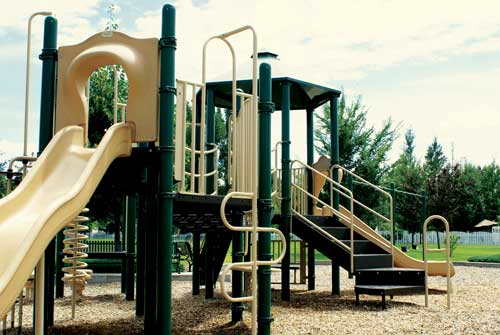 One of the very best things about being a kid was that none of us were remotely aware of the concept of health. You scarfed sugar cereal, guzzled coke, and hid your spinach in the dog’s bowl, and yet you couldn’t avoid being healthy.

This was because of the playground. They kicked us out there two or three times a day and wouldn’t let us back inside. We were healthy because we didn’t have any other choice.

To thrive, all you had to do was follow the unwritten rules:

2. The playground is (kind of) like prison. On the first day, you either kick someone’s butt, become someone’s bitch, or have candy.

4. If a stolen kiss occurs behind a bush, around a corner, inside a tube slide, or anywhere else where no one could possibly see it happen, it will become common knowledge around the entire school before you have even wiped off your drool. Same goes for pants-wetting, thumb sucking or crying.

5. The playground is like the poker table: if you can’t figure out who is the sucker — the punk, the patsy — then it’s you.

6. Time is relative. For the jocks, recess feels like it lasts five minutes. For the nerds, recess period feels longer than the Jurassic.

7. The playground monitor does not know the half of it. Never appeal to her for help. It’ll only make things worse.

9. Those who mature the fastest will always act the least mature.

On the playground, there are actually no rules. Kids’ lives are not simple, even though many childhood games – such as tag, tether ball, cowboys and indigenous Americans, smear the LGBTQ – appear to be extremely simple. Their rules can be communicated in one sentence. (Sometimes even just two words: “Run, nerd!”) But as you played them you gradually learned that each game was as intricate and nuanced as Afghan tribal society.

Tag, for instance. What could be simpler? Tag, you’re it! Tag, I’m it! In fact, the game of tag is some kind of bizarre torture / mating ritual / demonstration of dominance. David Attenborough should film it for the BBC. Like Afghan society and lion packs, tag is almost always gender-segregated.

Then, for no reason, one day, the girls turned around and chased the boys, like someone reversed polarity on a magnet.

This turn of events was, to many of us boys, not an innocent reversal. It was completely terrifying. We never knew why the girls were chasing us. What would they do if they caught us? What did they want? To beat us up? Hold us down? Or would they do something worse? Would they want to … gulp … kiss us?

Kids are cruel. My niece Noodle, 4, said that when the boys on the playground catch her, they tie her to the fence.

“They tie you to the fence?” I asked her.

This is the power of the playground: it gives kids invisible rope, like Wonder Woman.

“Is that scary?” I asked Noodle.

“Yes,” she said, seemingly genuinely worried at the memory. “Then I have to stay there against the fence and the other girls don’t help me.”

No wonder Noodle runs so fast.

At recess in my elementary school in Aurora, we sometimes played soccer — soccer, the bizarre sport that is played without the use of your hands, the very instruments that allowed us to rise above the lower animals. But soccer never stayed soccer for the full recess period; it ended when one of the pituitary specimens in my fourth grade class got frustrated with soccer, with all the skill, grace, and precision required to kick a ball, and just picked the ball up and started running with it. This was usually a kid named Terry Howard, a kid who, I believe, grew up to star in “Planet of the Apes” – as one of the apes. The rest of us would then try to tackle him, miserably. If he could charge through us and throw the ball through the goal, or else run it through, it was worth a point. (Or sometimes six points. We were all really much better at football.)

What was always interesting was how we reacted to Terry picking up the ball. If we had been World Cup players, we would have dived to the ground and clutched our shins in pain. If we had been lawyers, we’d have sued. If we’d have been girls, we’d have called Terry fat. But none of that happened.

Nobody called a foul. Nobody protested. We just started playing this new game — soccer/rugby — until Terry either won the game outright or else sent the majority of us to the nurse’s office while trying.

This little episode, and so many others on the playground, shows that kids are adaptable. Kids have little control over anything: where they live, who they hang out with, what they eat. Kids understand that, like much of life, there are no judges on the playground, that the playground is a return to the jungle, the primordial soup.

Still, as bruising as these games were, I much prefer them to the games I play today, as an adult. Adult games have too many rules, numbers, stats. Golf handicaps, tennis ladders, heart monitors — in adult games, you always know exactly where you stand, everything is measured and recorded so that you will be able to document the exact moment when you have your third aneurism. I think this predictability hoovers out much of the fun. I hate how acting like an adult mostly means sitting — office chair, driver’s seat, couch, mobility scooter, gurney for gastric bypass surgery. Our chief form of movement is rolling over to prevent bed sores.

The playground offers many valuable lessons for real life. If Terry Howard ever learned how to read, which I doubt he did, I hope he became a philosopher — not even Nietzsche taught me so much about nihilism and pain. “Life is suffering,” said the Buddha. “Get out of my way!” Terry yelled.

The playground: an advanced seminar on the meaning of life.