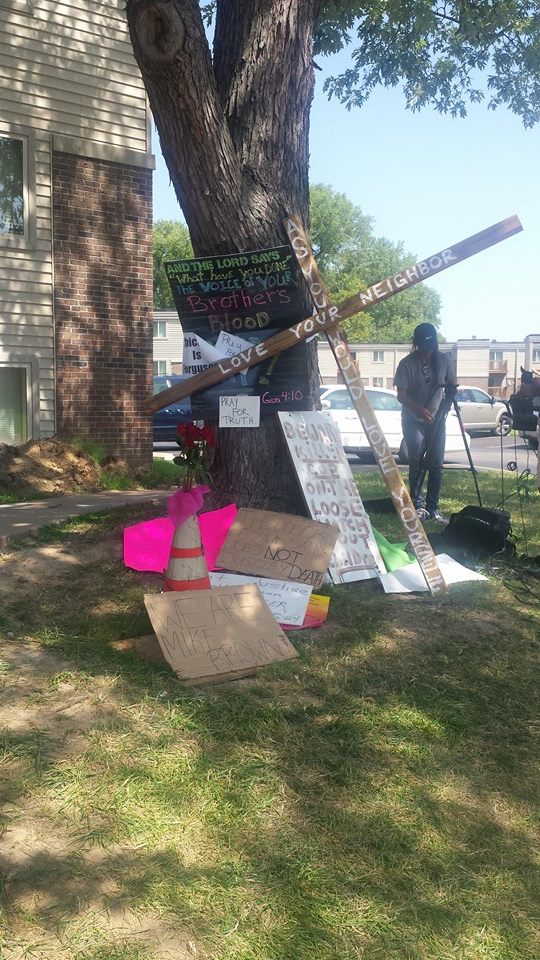 Thirteen or so years ago, Yellow Scene published numerous articles speaking out against the invasion of Iraq. We received angry emails and phone calls telling us we were anti-American, and that we “didn’t support the troops” (and a few other choice words). I am hoping that my visit to Ferguson creates more awareness than it does angry letters.

Ferguson is not an inner-city slum, it is a family-rich community. It reminded me more of Thornton than it did a ghetto. The protesters were family members, not thugs. The thugs and the looters that you’ve been hearing about were outsiders taking advantage of a horrible situation. Yet these families told me that they were peacefully protesting when rubber bullets started to fly (https://www.youtube.com/watch?v=GO1SKC6dK7o).  Yes, Ferguson saw violence but by all accounts, it appears the police fired first.

The protest was triggered by the shooting of Michael Brown by a Ferguson officer after stopping Brown for jaywalking on a small street winding through a residential apartment development. We don’t yet know exactly what happened but the evidence suggests that we are not hearing the whole truth– a suspicion encouraged by the fact that Officer Darren Wilson has refused to fill out an incident report.

When I was there a week-and-a-half later, I didn’t see rioters. I saw a police department so heavily armed that it frightened me, and was told by one officer that I was “lucky he was there to protect me”, though I had to wonder “from what?” as I did not see anyone acting violently.

All of the protestors I saw and met were peaceful and were there objecting to the unnecessary use of police force. I was told story after story of their 14-year-old boys being stopped by the police, put on the ground, and threatened with arrest, for nothing more than being outside.

Living in Erie, Colorado, I have never had to worry about my son being told to “get off the street”, nor have I ever had to watch police cars to make sure one is not circling around for me, but I have watched the police in neighboring communities arrest teenagers for riding a bike in the crosswalk as well as issuing tickets for traffic violations so petty one can only believe it is a revenue stream.

Using the military for law enforcement almost always end with bad results, which is in effect what we are doing by militarizing our police domestically. Soldiers and police have two different jobs. Soldiers go to war, police are supposed to help keep the peace. If the military themselves are alarmed by what they are seeing by the police (and they are) we need to stop and question what we have our police doing. A “community” approach to policing has shown to decrease crime, whereas a police department showing up for “war” and expecting violence has been proven to actually provoke and increase violence.

This isn’t just a Ferguson issue; our local police departments are also taking part in the militarization and privatization that is spreading throughout our police and judicial system.

Recently Lafayette received 40 military-grade M16’s. I am not sure what is going on in Lafayette that requires the police department to possess these firearms (especially when you consider these guys receive about 6 weeks of training to be an officer) but it does not make me feel safer.

Why? Several factors seems to be in play. Petty infractions are becoming the new tax base and towns are being funded by their municipal courts. Combine low-level infractions as a revenue source with an overarmed police department and we are looking at a model of policing that is not for the safety of the community but rather puts it at risk. And new laws are being passed every day, that turns someone into a felon with two or more minor infractions.

America’s black population, especially black males, bear the brunt of the consequences. Something people of color face is their kids start getting stopped and charged at 14, often for very small petty infractions such as jaywalking, racking up charges against them before they even turn 18.  Do we as a country really believe all blacks are “up to no good”? When people like Cliven Bundy are free to point guns at police and we have case after case of blacks and Hispanics in this country being arrested for the smallest of incidents, to those being shot because they talked back to the police or reached for their phone, we have to stop and admit to ourselves that we have not moved as far forward as we would like to believe. Coupled with drug laws designed to fuel profit for prisons, we are not a nation of laws with justice as the end result.

Why do young, black, males seem to experience far more stops by police than their white counterparts? Blacks face being stopped almost twice as much as whites. People of color make up 60 percent of the prison population while only making up 13 percent of the population overall. Black men are 6.5x more likely to be incarcerated than whites (for the same exact crime) and over 70 percent of people in jail are non-violent offenders. The US is the only nation in the country whose prison population has increased 700 percent over 40 years (resulting in over 2.2 million behind bars). At the federal level, prisoners incarcerated on a drug conviction make up half the prison population, while the number of drug offenders in state prisons has increased eleven-fold since 1980. Most of these people are not high-level players in the drug trade. Most have no prior offenses.

To even begin to deal with this we must admit that racism still exists, even here in Boulder County. We must insist our police departments are working from a Community Police approach first, and we must recognize the drug war is a huge waste of effort.