You Fit The Description 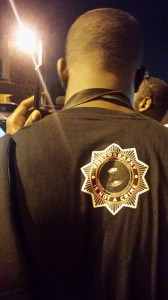 It was 11:30 p.m., I was cold, wet, tired, and in handcuffs. One officer was searching my car, the other one was in the driver’s seat of the police cruiser checking my ID. I had been sitting on the curb for 20 minutes wearing my Old Spaghetti Factory uniform, fighting back anger. My house was two blocks away, but I knew any sudden movements would get me shot. What did I do wrong, I wondered? I was driving down the street and the cruiser made a sudden U-Turn and flashed their lights and I pulled over. I just complied with the Officers; I knew from living under the shadow of the LAPD Foothill Division that you never, ever question a cop. The officer completed searching my car and asked me where I was an hour earlier. There had been an armed robbery on the North end of town and I fit the description of the suspect. I calmly explained that an hour earlier I was still about to clock out at work. The response from the officer was, “Yeah right, we got you.”

Occasionally, I think back to that moment. Other moments as well, like getting followed in stores, people clutching their purses, only being able to look at one ring in a jewelry store at a time. This has been my life in California. I don’t blame white people. I blame American culture.

Living with racism in California has always been a harrowing experience; it is never explicit like I found it in Alabama, nor is it brutal like I found in Georgia. Racism in California is like a slow pressure always at the back of your mind that no pain killer will solve, and no stress relief can eliminate. Knowing that all of my childhood friends except one are either dead or still in jail, is disturbing. The lucky one that made it out, well, he’s an MD at Johns Hopkins. To this day, I get a burst of adrenaline when I see a police officer. Are they going to pull me over? Try not to make eye contact. Turn the radio down. Keep both hands on the steering wheel.

Police contact with Black people is currently the topic of the day across blogs, social media, and the news media. This is nothing new, and it will not go away anytime soon. The one thing I can’t change about my appearance is my skin color. For some reason, I always seem to fit the description.

Fitting the description does not always have to involve police contact. When I attended high school in San Jose, CA, I had a guidance counselor who calmly explained to me that college was not for me. That I was more suited to a labor intensive career like construction, or warehouse work. After showing him the letters of recommendation I received from two United States Senators, he reluctantly wrote me the required recommendation for the NROTC program. Several weeks later, I received a call from the Navy informing me that I was to return to the counselor to get a new letter of recommendation. The counselor had written a rude and spiteful letter to the Navy and a Naval Officer would be having a phone conversation with the counselor before I arrived. When I saw the counselor later that week, he was visibly upset, but had written a letter that was far more balanced.

I could only wish this was an isolated incident. My turbines instructor in College informed me that I would never ever have the ability to run a turbine in my life. I took a fair amount of glee in informing him that I was currently in charge of 1,500MW of power generation using steam and gas turbines.

I learned to adjust to how people view me, but it was not easy. Many others don’t have the family support, the determination, or the educational background to fight through the constant barriers placed in front of Black males today. Today, not the 1960s or 1950s – I’m talking about today. Racism today is so ingrained in American culture and it has become nearly invisible. It is no longer a matter of placing blame for the past, we must work together to improve the present.

The best description I have been able to come up with has been a foot race. The 500 meter dash.

Both runners are capable of finishing the race, but it is far easier to finish as the first runner. Many spectators point to the people who finished as the second runner, and seriously question why more people don’t finish the second race. Both lengths are 500 meters, right?

I ran the second race. Once completed, I have spent my time trying to clear all the obstacles the second runner has to overcome.

Which race did you run? Will you help clear the field for the second runner?