It’s Halloween season, and that means all manner of creepy creatures and fearsome fellows will be crawling their way out of haunted houses and temporary storefronts all over Colorado. To get into the “spirit” of things (pun absolutely intended), we spoke to Kevin Gentilcore, artist at the local comic book house Creephouse Comics, to find out what original, grotesque innovations are being dreamed up in our own backyard.

Yellow Scene: When did you start drawing and illustrating?

Kevin Gentilcore: I started drawing when I was a kid, but I’ve been doing comics and stuff for about eight years. Creephouse has been around for five years this year. My partner and I, William Tooker who does most of the writing, we met here in Colorado through an artist’s group. We ended up parting ways with them but we stayed in touch. I’ve always enjoyed Will’s writing and thought maybe we should do a short story as a comic. I came up with the name Creephouse Comics. Most of his writing is horror, and most of what I want to do is horror.

YS: Tell us about some of the characters and stories in Creephouse…

KG: The first one we did was Spirits in the Well. Vengeful spirits from beyond the grave in back and white – two short stories. We collected them later into Creephouse Vol. 1. That was our first venture together, and then there’s another short we’ve been doing called Never Send a Monster, which is about a girl who is sick of being hit on by men so she created a devil through magic so that she can deal with all of the negative attention she was getting.

YS: What were your early influences?

KG: At first, it was mostly Marvel. It was at the time when Image was starting to spin off from Marvel, so I was really into Jim Lee and Todd McFarlane stuff. I went to college for animation and illustration and started to get back into comics. I was reading a lot of independent stuff, not Marvel or DC, and the big influence there would be Mike Mignola’s Hellboy.

YS: You worked for Marvel, correct?

KG: I did sketch cards for a Marvel series. It was basically a Marvel trading card series, and for the last couple of years they would out one of a kind hand drawn cards into the packs, and it was a hunting game to find the original art. Technically, I worked for Upper Deck who worked for Marvel. I did Thor and Iron Man, and a couple for DC like Superman and Batman. I guess that would be the most high profile gig I’ve had.

YS: What is the local comic book scene like here?

KG: There’s a lot of great people around here. We meet up at the conventions around here and some smaller local shows, and I’m part of a group called Web Comic Pioneers. It started a couple of years ago, trying to get some attention on what a web comic is, how it works. It kind of petered out, because web comics are kind of ubiquitous now. I’m woking on a heavy metal-themed comic with some other guys from Colorado.

YS: We see online that you’re a big fan of metal music?

KG: I love all that stuff. Its not so much an influence on the Creephouse stuff, but I appreciate the approach to that kind of music, pushing the limits on what people can consider music.

YS: Did horror movies have a big impact?

KG: Big fan. I like it all, but I like the old Universal movies a lot, and even the Hammer movies from the 1960s and ‘70s. The colors and everything I think are a pretty big influence on Creephouse comics. I can find something enjoyable in all of them.

YS: Are you a Halloween fan?

KG: I love the season but I don’t really get into the costumes and stuff like that. Usually, it’s about the change in the weather. I’ll watch some of my favorite horror movies and get inspired by the season.

YS: What are your plans for the future? 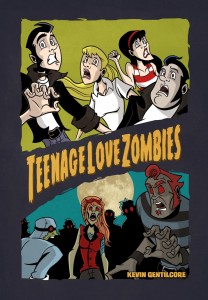 KG: We’re working on a couple of new comics right now. I had been doing Teenage Love Zombies for the past four years and it ended this year. In it’s place, we’re doing The Haunter, which is a superhero horror thing. My partner and I came up with a space sci-fi comic called Krush McNulty so we’re doing that as well. The first issue of both of those, you can get through our website. We’re going to be a Kickstarter to put Teenage Love Zombies into print.

To find out more about Kevin Gentilcore and Creephouse Comics head over to their website at www.creephousecomics.com.

View all posts by Brett Calwood →