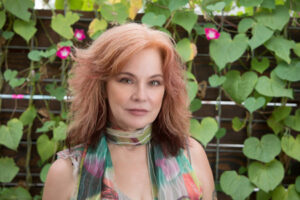 It’s 12 minutes after 1 p.m. when Shavonne Blades blows into 24 Carrot — a whirlwind of flowing, colorful dress fabric traipsing in her wake, shocks of red hair framing her face, which is adorned with a mask emblazoned with the words “Defund The Police” in bold, block lettering across it.

She’s a little late, sorry, but she had to round up her collection of patterned facemasks in case we need to use them for the cover shoot. She pulls out her plastic bag, filled with different masks and starts talking excitedly about the different options, settling on the one with the leopard print, a virtual electrical storm of energy seeming to brew around her.

“How about this one?”

The Red Tornado has arrived.

The bistro we’re sitting in has a special place in the Yellow Scene publisher’s history.

“24 Carrot used to be the Erie Inn, a classic dive bar I started bartending at in 1991, and then on and off until around 2004.” Shavonne has already launched into a soliloquy of reverie about our environs. “There was a horse in the bar once. And a motorcycle. And I used to dance on the bar and crowd-dive off the bar… My baby shower was held at the Erie Inn. The town decided to host me a baby shower and about 200 people came through that day.” She segues into a long story about having to walk a drunk regular home back when Erie only had a few paved roads, and more crowd-surfing stories for the waitress waiting to take our order.

You ever try to corral a tornado? 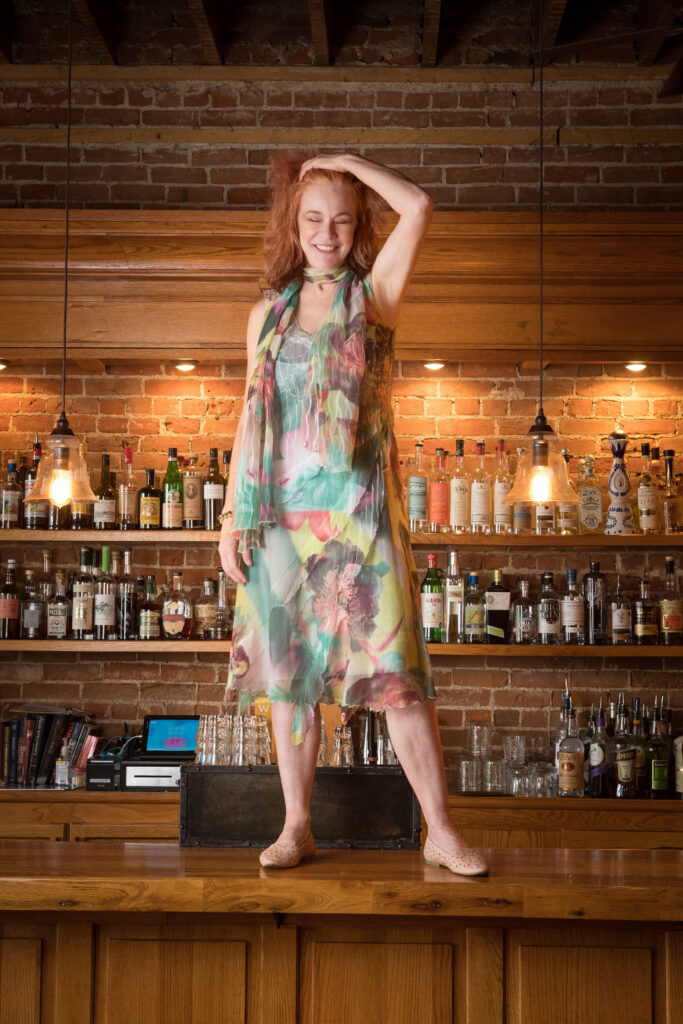 Shavonne loves to tell stories. And to say she has plenty to tell is an understatement. This month marks the 20th anniversary of Yellow Scene — called the “Gold Mine” for the first two issues, which were simply circulars printed on yellow paper providing print ads for local businesses, published ad-hoc.

“It was just, like, kind of whenever,” Shavonne says. “So the first one went out and a few weeks went by and people called me up and they said, ‘do another one.’ So I did another one and it doubled. And then a few more weeks went by, people were like, ‘do a Christmas one. We want a Christmas one.’ So I did a Christmas one and it doubled again and I started adding commentary. I couldn’t afford journalists, so I had word-of-mouth citizen-written comments. I had controversy right at the very beginning with an article…. people started harassing me, calling my advertisers, saying I broke election laws by printing this letter to the editor…”

Controversy is Shavonne’s wheelhouse. She’d tell you she never shies away from it. Her detractors might say she seeks it out. In the 21 years I’ve known her, I’d say both are likely accurate statements.

Shavonne’s story might have been written by Tom Wolfe, if he’d been into female protagonists. From high school to a full ride on an art scholarship to the Rocky Mountain College of Art and Design. Then, after a year, on a whim, she headed to California, only to get waylaid in Amarillo, Texas, for a couple years.

“I fell in love, then partied for two years in Amarillo and made a ton of money,” she says, in between bites of her soft-shelled crab sandwich, which I’m certain isn’t as good as the pork-belly-and-blueberry-waffle benedict I’m eating. 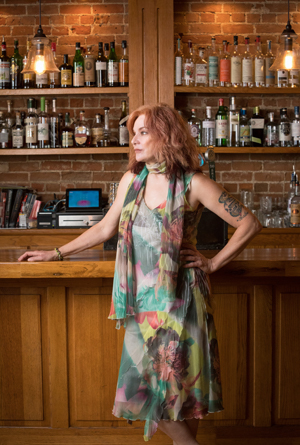 And it was in California where she fell in love again. This time, with alternative news media.

“I saw this alternative weekly in Santa Cruz, and I’d never seen one before,” she says.  “They were new. In the early ’80s there were maybe a dozen.”

It wasn’t long before Shavonne talked her way into a role as a sales person there, and it wasn’t long after then that she was setting sales records. She broke in by selling to accounts that never bought — one of which was an ad she hand-sketched for a client.

“And I went back to her, and I just held up the sketch, I didn’t say anything. She’s like, ‘Oh, that’s really good. Nobody’s ever done that for me. I’ll buy it.’” Shavonne had found her calling.

A few more years in California. Hitchhiking adventures up and down the coast. Following the Grateful Dead for a while. Way too much partying. And eventually back to Colorado, where her son was born and responsibilities needed tending. Just keeping up with the flow of stories out of Shavonne is exhausting on its own.

Over the course of an hour, we talk about social justice, our shared love of journalism, how YS grew from a center-stapled Reader’s Digest-sized circular into a perfect-bound, full-color glossy. We talk a lot about the struggles — the recession in 2009, or when the publication almost drowned in the floods.

“In the floods, in ’13, that was brutal,” she says. “The fourth quarter is always my most profitable time of the year and we lost $20,000. And that’s when I really started to struggle. I remember the sky was falling, and just I’m in the hole, and I already spent all this money expanding, moving into Boulder and expanding into borrowed money for Brides to Babies (a second magazine title she published for several issues before shuttering it), and then the floods hit… And that was kind of the start of a spin out period, I spun out for a couple of years, like really struggled with mental health, mental outlook and got really, really dark.”

Her eyes mist over just a little as she recounts the experience and she breaks eye contact for a moment, looking towards the far end of the bar as though it’s a window into the past. But it’s a brief reverie, and within moments, Shavonne is smiling at the thought of coming out against the Iraq war right after 9/11 and the ensuing hate mail.

“You will never bully me,” she says to those who would love to silence the YS voice.

It’s the base ingredient that has earned Yellow Scene more than 100 journalism awards from the Colorado Press Association and the Society of Professional Journalists in its run, along with plenty of mud-slinging from local Facebook groups filled to the brim with right-wing, white fragility — and the occasional death threat.

And the truth is, it’s impossible to see where the Yellow Scene ends and Shavonne begins.

And she couldn’t imagine it any other way.