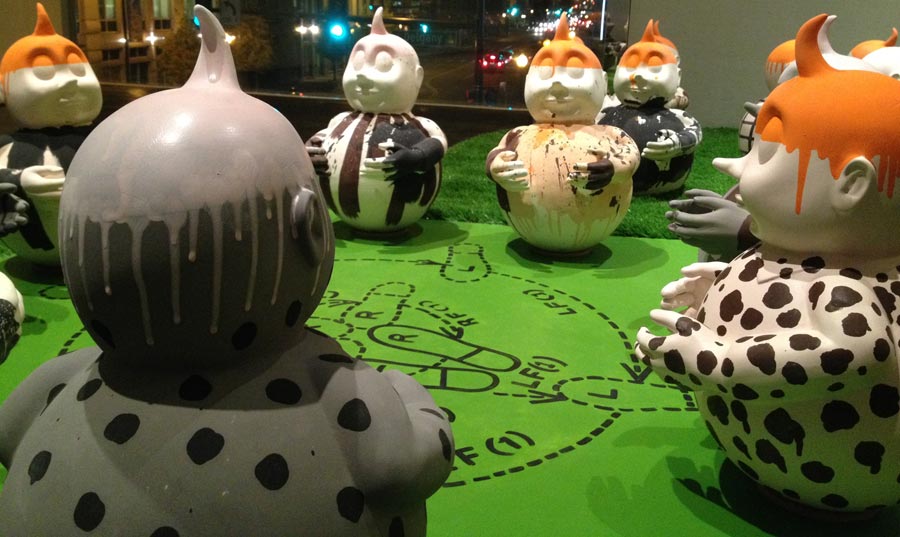 Here’s what you probably know about Mark Mothersbaugh – “Whip it!” by Devo. The video is unmistakable – five guys in a strangely western scene, wearing some sort of red pyramid hats and rocking out. What you don’t know is the 40-year art career that continued and found it’s way into pop culture in some unexpected places.H

Want to find out more about Mark’s work? Check out his site online.

Mark’s most prominent modern work can be found in cinema and television. From scoring the theme song to Pee-Wee’s Playhouse and the Rugrats franchise to wider audiences in The Lego Movie, Life Aquatic with Steve Zissou, and 21 Jump Street, Mark has corroborated with some of Hollywood finest.

The art of collaboration has been with Mark since his Devo days and in an interview with Co.Create he described the practice of stepping aside for the bigger image “they’re not making an image to bolster your music, you’re making music to bolster their image.” Perhaps it’s this deeper understanding of his role that helps his music disappear into the audiences, adding life to cartoons and filling scenes with the appropriate momentum.

Marks role in film is perhaps his most notable contribution to modern culture but his work as an artist could be the stamp raising him into historical prominence. Although often pegged as being below the cusp of high art, his use of Ben-Day dots, advertising and cultural iconography, and reflection have helped Mothersbaugh translate pop art into a unique brand that is all his own.

The varying mediums he uses speaks to the change and development of Mark as an artist. Starting with a welcome mat for his studio, Mark has a series of pieces sewn on rugs. The mash-up musical instruments reveal the relationship Mark has with technology and sound. Reconstructed pipe organs mixed with bird calls and an automatic pump are expositions of Marks idea of the mechanics and the imperfect nature of creativity and originality.

Nearly 30,000 post card sized drawings and sketches have been complied for the show and represent an enormous amount of work and dedication. From simple doodles with dates, to “Las Vegas” and a figurine, the postcards are a time line of Marks adventures and chronicle the development of the artist. Born near-sighted, Mark’s “Beautiful Mutants” exhibit brings a unique experience with vision and composition.

The Museum of Contemporary Art Denver has compiled the first complete retrospective exhibit of Mothersbaugh’s work and is setting it off on a five museum tour. Last Saturday was free for the kick off of Denver Art week but the show is running through February so there is still time.

It’s hard to describe his work, it’s raunchy, it’s provoking, there’s a car that has two bumpers and no hood, a horse with only hind legs and his Roil-Polis that are centered around a choreographed dance, it’s wild stuff. Mark deserves a place in the American psyche, and through his art, he’s earned, and now it’s about to tour the country. Check it out before he goes back behind the scenes.