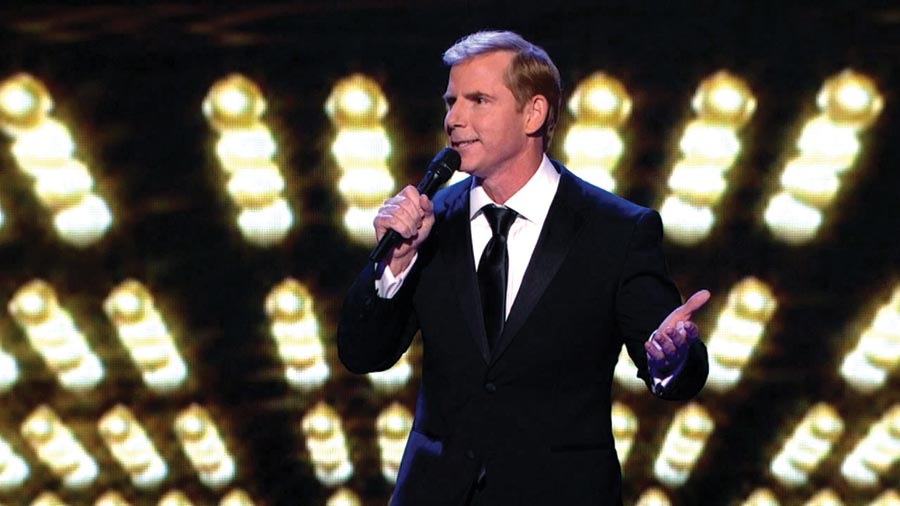 Since his second-place finish on the 2012 season of America’s Got Talent, Tom Cotter’s star has been shooting through the comedy universe, with myriad TV appearances, commercials, a comedy special and a pilot he shot for a major broadcast network. Call it an overnight success story 25 years in the making. Here, Cotter talks about the Unabomber, skiing Winter Park and embryonic comedy.M

Yellow Scene: When did you first know comedy was your calling?

Tom Cotter: From conception. As an embryo, I knew I had a gift. I developed into a funny fetus. I would routinely tickle my mother’s internal organs and make her giggle. By the ninth month she was very uncomfortable, and she had no sense of humor. That was a tough womb.

YS: You’ve been working for decades, but catapulted onto a much bigger stage after America’s Got Talent. What did that feel like?

TC: Orgasmic. I’ve been doing stand-up for more than a quarter of a century, and over that time I’ve done a fair amount of TV, but most of it tis on cable, or late night. AGT is a completely different beast. Its ratings dwarf anything else. It’s also on during the summer, which means it’s up against re-runs on other networks, so it’s almost unfair. Then when you add the fact that the summer Olympics were on the same network, and it was the first year of Howard Stern as a judge, it was the perfect storm for those of us lucky enough to be on that season (season #7). I’ve never had that many eyeballs on me, and the result was that I was suddenly filling theaters, and being recognized everywhere. It was crazy, and my kids were thrilled by the attention that we were getting. An unexpected benefit was the treatment I received from the comedy community. Big name comedians were tweeting and using Facebook to get me votes. Some of these folks I’ve never even met, so that felt pretty cool too. I don’t think that they liked me in particular, but they didn’t want the jugglers to beat the comedian.

YS: You would you say are your biggest comedic influences and why?

TC: My bride of 13 years is also a stand-up comedian, so for the good of my marriage I will say my wife. Now for the real answer… I used to sneak George Carlin and Richard Pryor albums into my house and listen to them with my friends under a blanket that we called the “Cone of Silence” (from Get Smart). As a 10-year-old, I could recite their bits verbatim. I would fake sickness or insomnia, so my parents would let me watch the Tonight Show when Carson was the host, and the original cast of Saturday Night Live, way after my bedtime. I thought comedians were the coolest people on the planet. Now I know better.

YS: Name a few of your favorite current comics. What do you find most appealing about them?

TC: Steven Wright, Don Gavin and Brian Kiley out of Boston, because they are brilliant. Dave Attell because he has no filter, and two guys that I really admired, but that left us too early were Greg Giraldo and John Pinette. Some comics are great performers and some are excellent writers. They were both, which is rare.

YS: Your delivery style is machine-gun fast, yet just breezy enough that it never feels over-rehearsed. Did you ever have help from others to get to this point?

TC: Yes. I’m known for doing a lot of one-liners — not cocaine, but jokes. Don Gavin (mentioned above) is the master of misdirection, and I emulated his style from the very start of my career. My wife will occasionally write a line for me, or punch up an existing bit.

TC: Every spring break when I was in college, we would make the long drive from Ohio to ski at Aspen, Vail, Copper, Breckenridge, etc. I’ve been back semi-annually since then to ski at Telluride, Steamboat, Winter Park and a few others. I’ve performed at the Colorado School of Mines many times, and Boulder is one of my favorite places on the planet. It’s hard to come up with something I don’t like about Colorado, but if I have to find a negative, I’d say that the prison [ADX Supermax Prison in Fremont, Colo. — FD] in your state that housed among others, Ted Kaczynski (The Unabomber), Oklahoma City bomber Timothy McVeigh and Ramzi Yousef (ring eader of the 1993 World Trade Center attack) gives me the creeps. The fact marijuana is legal far outweighs any negative.

YS: What advice would you offer young comics starting out?

TC: First and foremost, write, write and write some more, but also, never take a sleeping pill and a laxative at the same time, and never let a toddler play with “Super Glue.”

YS: What’s the best thing about this business? And what’s the worst thing?

TC: The best thing is that I get paid to make people laugh. How cool is that? Everyone gets laughed at when they are at work, but the vast majority of it is done behind their backs. Also, I work one hour per day. Worst thing? Wow… Comedy is a dream job if you happen to be dreaming of poverty and rejection. The worst thing for me is being on tour away from my family, but my brother spent three years in Iraq and Afghanistan, away from his wife and kids, so I shouldn’t whine about being away for a few weeks at a time.

YS: Any other projects in the hopper you’d like to tell us about?

TC: I was on The Good Wife last week, and they may bring me back. I just shot two episodes of Comics Unleashed, and I’m a regular on Redeye on Fox News channel. I shot a pilot for NBC that is still on life support, but I’ll believe that they are picking it up when they say “Cut, that’s a wrap.” My hour special will be out in 2015. I had a small role on Dateline: To Catch A Predator, but I don’t want to talk about it. Stay tuned.