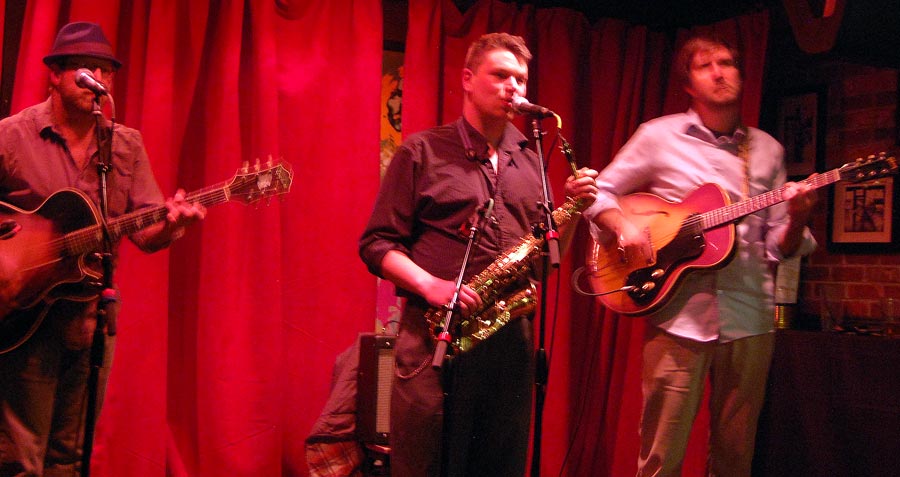 Even for a transplant like this writer, there’s something wonderfully familiar about experiencing live music at Waterloo in Louisville. Thursday is swing night, and that means the Boulder Swing Collective. It also, around this time of the year, means that an Avalanche game will likely be on the TV over the bar. Combine the game, awesome live music and some excellent imported beer on tap, and you have an idealistic all-American experience.E

All over the United States, guys and gals are watching hockey on a Thursday night while listening to a house band in a cool bar. Here in Louisville, Josh Karp has created an awesome environment for live music. The acoustics are great, the vibe is close to perfect, and the clientele, while largely relaxed on a Thursday, are still overtly looking for fun.

The Boulder Swing Collective, a trio tonight, is actually a larger pool of musicians. Whoever is available or wants to play on any particular Thursday is a member of the band that night. As a first timer, I don’t know what the band is like when the other musicians perform. These three guys are great though.

There’s a New Orleans swing vibe to the sound, combined with trad jazz. People in the audience are eating, some are focussed on the game (Colorado lost to Calgary in overtime), so there’s an element of “background music” to the tunes, some instrumental, some not. But that’s ok – those that are listening intently are rewarded with some fine, soulful musicianship. Indeed, one couple was up and dancing for very other song.

Sometimes, we go to a show to stand front and center, to soak up every little sight and sound of the show. Other times, we wan to sit at the bar on a work night, and simply be entertained. The Boulder Swing Collective, and Waterloo, offer this.