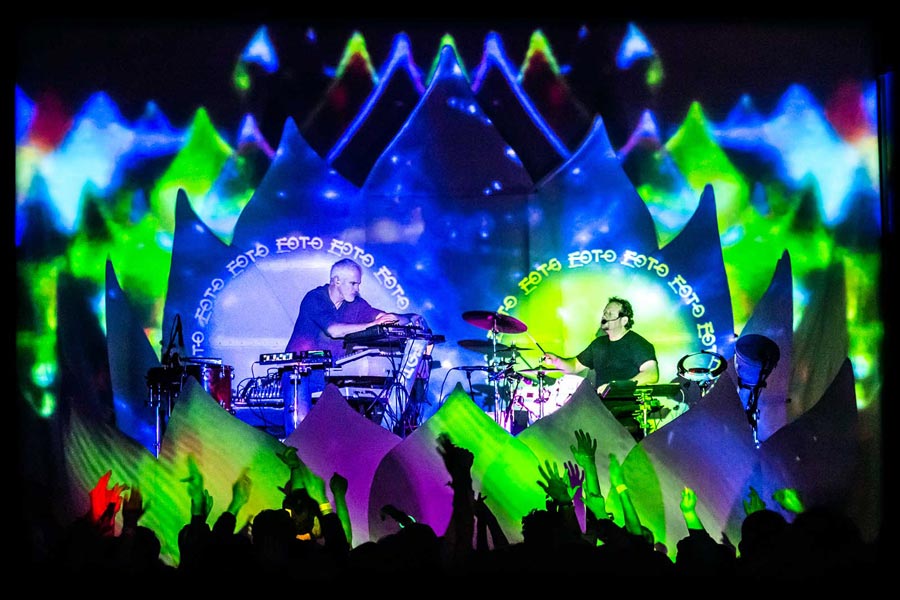 A brief chat with Eoto

Eoto is the electronic side project of String Cheese Incident men Jason Hann and Michael Travis. The duo will be performing in Denver on December 13, so we spoke to Hann to find out more about the group.E

Yellow Scene: You and Michael Travis are obviously in the String Cheese Incident together – when did you decide to form this new project?

Jason Hann: When I first got into String Cheese around 2004, I’d stay at Michael’s place most of the time for rehearsals. He always had instruments set up, and after rehearsal we’d go back to his place and jam from about 10 p.m. till 4 a.m. It was just fun playing music. We could just play all night long. We kept doing that and adding different technical things to make it more fun for us. We’d play with new technology, and we started recording it and realized that it sounded pretty good. A year or two later, String Cheese was getting ready to break up. We were wondering what we were going to do; everybody else was a main writer or lead singer in String Cheese but we play drums. How would we feed our families? We just booked a ton of shows because we’re not getting a younger. We knew that we didn’t mind getting into one vehicle, and taking off for three months playing every night of the week. It took a while to take hold, but we created our own fan base for it.

YS: Now that String Cheese is not broken up, how do you balance the two bands?

JH: String Cheese’s schedule is the priority, as far as when are we going to be practicing. That’s such a bigger machine to keep going. We sort that out eight or nine months in advance if we can. Then that gives us plenty of time to go back to Eoto’s management and tell them the times we have open. They can fill that up as much as they want. We don’t get much time off, but next year we’ll probably take some off time. Sometimes you feel some space so that you fell rejuvenated to dive back in.

JH: Oh yeah. There are so many people that moved out to Colorado now. It’s an incredibly beautiful state to do so many different things. Now they’ve legalized marijuana there, so there’s a whole other attraction. So many people moved there just for the music. We travel a lot, but man, we go to Colorado and it’s so vibrant.

YS: What can we expect from this Eoto set?

JH: Expect the unexpected. We run through our EDM styles of music in so far as we’ll cover electro, our own versions of dub-step and drum ‘n’ bass, and we figure out a way to do things live. It’s kind of geeky, but we sync up one of the keyboards so that it only gets played when the kick drum is played. There’s all these different styles, and it’s still our own style. It’s all over the place. We’ve really been getting into funky stuff and disco, and that’s been going over well.

YS: What’s next for Eoto after these shows?

JH: We stop until the beginning of March. We do our annual Praang show the following weekend, which we do around Christmas time.