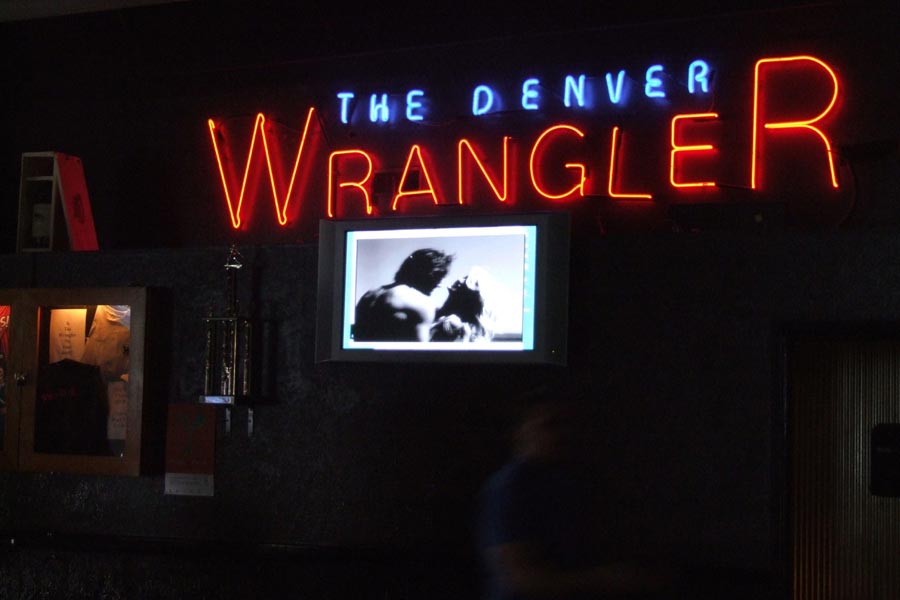 An evening at the Wrangler

It’s been a little under a week since I moved into the area, and the first thing on my to-do list was to locate the queer scene. Of course, unpacking, meeting my new roommates and settling in at my job came first, but Tuesday night was the perfect time for me to branch out and start my queer exploration in Colorado. Like a modern Lewis and Clark, but alone.I

First stop: the Wrangler. Located in downtown Denver, 1700 Logan St. to be exact, the Wrangler seems like a typical bear bar complete with beefy men behind the bar and the smell of testosterone filling the air.

Some might ask why I chose the Wrangler for my initial exposure to the Denver queers, and I don’t even have a concrete answer for that. Simply put, it was an excuse to go into Denver and the reviews online claimed the workers and customers were mostly welcoming and friendly. Oh, and it hosts Tightwad Tuesdays, which to a recent college grad who just dished out money to move across the country sounded like a perfect fit.

The Wrangler looks like a typical gay dive bar. The walls are covered with TV screens flashing photos from past events or playing pop music videos. The main bar is right in front of the entrance, and is surrounded by plenty of floor space and some tables.

The bar wasn’t crowded by any sense of the word, but then again it was a Tuesday. The bartender, who was wearing a cut off muscle shirt, took a break from his conversations with another costumer to greet me and take my order, which was a $2 beer that they grab at random. I was unlucky enough to get Keystone.

The back room was hosting its weekly double elimination pool tournament where most people gathered, either shooting pool or socializing. The rest of the bar seemed to be mostly desolate, but a few clusters of people gathered at the bars, or at tables. Manga-style art hung around the building featuring shirtless beefy men.

Just outside the back door, the small patio was packed. Smokers and their friends gathered underneath the heaters, even though the temperature outside was just above 50 degrees. Away from the music and sound of pool balls clacking together, the patio was the place to be on the cool night. No one knew a stranger, and the people were including everyone in the conversations about haircuts, snakes and nipple piercings.

“It’s a little dead on Tuesdays, but on Sundays when they have Beer Bust this place gets pretty packed,” Tyler Flores, customer, said. “This place is one of the best gay bars in the area. It has great specials.”

Beer Bust is a weekly event at the Wrangler. The event on the site lists it as “legendary” and isn’t the worst way to spend time on the Lord’s day. For $10 every person receives a cup and gets unlimited refills of Coors Light from 4 p.m. to 8 p.m. Each bust is sponsored by a different organization and part of the proceeds is donated to a different local charity each week.

The Wrangler was the right choice to start my journey, and I will definitely be attending beer bust.