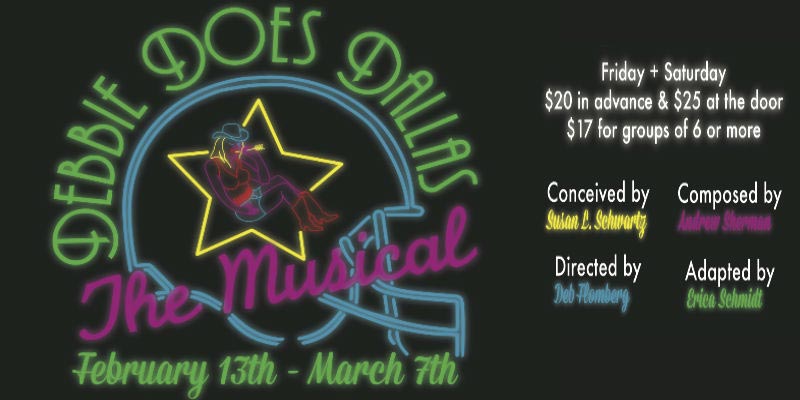 3 Questions about Debbie Does Dallas:

The Musical with Deb Flomberg from Equinox Theatre Company

Yellow Scene: What drew you to this show?

Deb Flomberg: It’s really just a fun, campy show that has surprisingly strong music and dance numbers. Sometimes it’s great to just have fun with something, and that’s what this show is all about. Silly fun.

DF: I certainly wouldn’t recommend this show for anyone under 18. There is no nudity but there are a lot of suggested situations. After all, it’s based on an adult film from the 1970s. I’d consider it rated R.

YS: What has the rehearsal process been like thus far?

DF: This cast is so much fun to work with. They’re all on board to help make this show as fun as it can possibly be. It also helps to have such a fantastic Assistant Director/Choreographer, Christian Munck, on board, helping us create this zany world.

After dropping a few off-handed jokes about Bill Cosby and the firestorm of allegations flying at him from women around the nation, Hannibal Buress graduated from well-known-in-comedy-circles to the national consciousness. But don’t let his connection to that moment fool you — Buress is flat-out funny. The Windy City-bred juggernaut was a staff writer for SNL and 30 Rock, and some of his more noteworthy appearances include Letterman, Fallon, and Kimmel. With a precise, deadpan delivery and catch-ya-slipping cerebralism, Buress is a compellingly fresh voice in an admittedly already fantastic field of some of the greatest. At the Boulder Theater, Feb. 19, 7 pm, $29.50, bouldertheater.com.

From his days with Jefferson Airplane and some of the most important music festivals in the history of American music to his 46-year on-again, off-again, on-again “side project” with bassist Jack Casady called Hot Tuna, Jorma Kaukonen remains atop a small list of some of the most influential fingerstyle guitarists in Americana history. In a career spanning almost 50 years, Kaukonen has played with pretty much everyone, everywhere, always staying true to his picking roots, steeped in bluesy folk and enough twang to find plenty of country crossover fans. He returns to Boulder on Feb. 21 with California-based singer/songwriter Joe Purdy in tow to perform a live eTown set at 7 pm. Tickets are $50. etown.org.

Last month, Aaron “Loki” Johnson made a compelling case for what makes the definitive “Denver sound,” when it comes to Mile High-bred bands (read it here: bit.ly/DenverSound). He drew a distinct line from the Denver Gentlemen, through to Slim Cessna’s Auto Club and onto bands like DeVotchKa and even The Fray. He called it “Melancholy, gothic country punk.” Another act cut from that same cloth is Robert Louis Cole. The songwriter breathes a pained gravel tone into his bluesy twang, a lo-fi experience that recalls a little Waites and maybe a little Robert Johnson in places. He’s become a regular at Waterloo in Louisville, where he hold court with Clay Rose on Feb. 20. Give him a listen on bandcamp and check out waterloolouisville.com for more information.

Chris Daniels and the Kings at Nissis

Already auspicious thanks to the subject matter in George Orwell’s book of the same moniker, 1984 promised to be an unusual year. Indira Ghandi was assassinated. Regan was re-elected in a landslide. The Cosby Show debuted on TV. Apple introduced the Mac. Ghostbusters was released. And on March 14, Chris Daniels and the Kings played their first show.

Thirty-one years later, Ghostbusters faces a reboot, Apple’s bigger than ever and Daniels remains as prolific as ever. The UCD professor drops his new album Funky to the Bone at Herman’s Hideaway (on Valentine’s Day, but you can also catch him at Nissis in Lafayette on March 13 at 7:30 pm ($10, nissis.com), and celebrate his amalgam of blues, big band swing and funk along with his steady commitment to the Centennial State for three decades and 13 albums. And counting.

Krusty’s Accountant: Let me get this straight. You took all the money you made franchising your name and bet it *against* the Harlem Globetrotters?

Krusty the Clown: I thought the Generals were due! He’s spinning the ball on his finger! Just take it! Take it!

Krusty the Clown: That game was fixed! They were using a freakin’ ladder, for God’s sake!

That scene from a 1995 episode of The Simpsons pretty well sums up what you’ll see at Harlem Globetrotters game. Zany antics, insane ball-handling skills and general hilarity have been their staple for almost 90 years, dating back to their first games in Chicago in the late 1920s. “Fans don’t come for a name,” said Hot Shot Branch in an interview with YS a few years ago. “They come for the team and who and what the whole team is. So to be a part of that team and that tradition is humbling.” Create some memories with your family and catch the game at the 1st Bank Center on March 7, 7:30 pm. Tickets start at $19. 1stbankcenter.com.

Taking risks. It’s a mantra that claims a foothold in any form of artistic expression, but it paid more lip service in the theatre than arguable anywhere else. And most of the time, it’s just that. But over the last decade, Colorado’s off-off-off-off-off-off Broadway scene has grown to dozens of theatre companies outside of the Denver Center for the Performing Arts complex, plenty of which have homes in Boulder, Longmont, Lafayette and Louisville. One such home is the Nomad Theatre, and they’re hosting something risky in its own right: 24 Hour Theatre — four short plays written rehearsed and performed in 24 hours. This year’s theme is a song lyric. Playwrights have 14 hours to write a one-act, then actors and directors have 10 hours to learn, block and produce the play — after which is a talk-back for the audiences. Curtains at 7 pm on Feb. 21 at Nomad Theatre in Boulder. Tickets are $10. Check out boulderacts.com for more information.