A Moment with Drew Litton 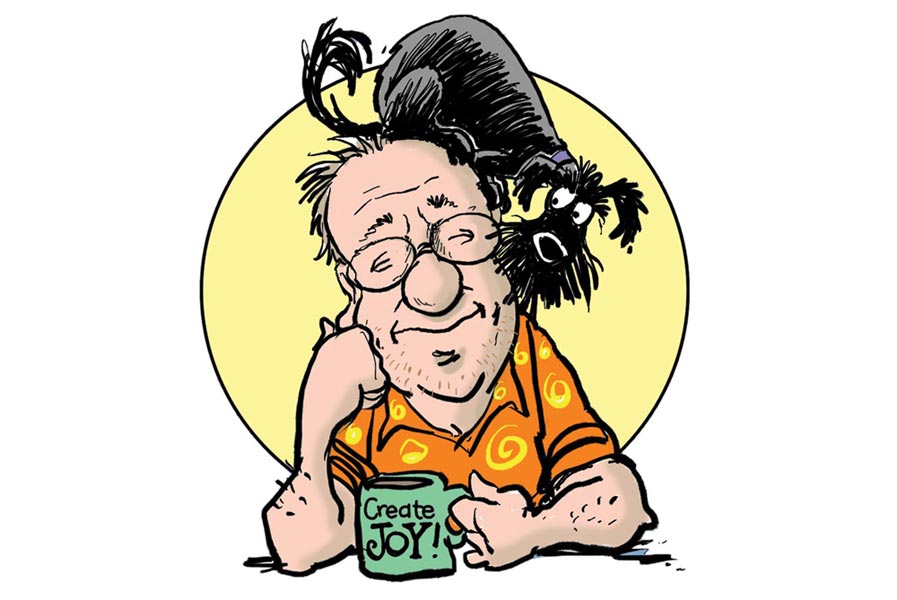 I’m gonna be honest: I’ve been a Drew Litton fan since I started reading the Rocky Mountain News in 1982—around the time I learned to read. The long time Win Lose or Drew comic artist is one of a handful who’s figured out how to eke a living in a tremendously difficult market these last years, even though he remains one of the great talents of our time. Here, he talks about watching cartoons, the Charlie Hebdo attacks and Denver’s Comic Con.I

Yellow Scene: How did you get into this business?

Drew Litton: It was either drawing cartoons or doing something that included me uttering the sentence “would you like fries with that?” I grew up asthmatic so I drew a lot as a kid. Especially in math class. My first job was getting coffee and wrangling copy for editors off of an old teletype machine in El Paso, Texas where I grew up. Later, one took pity on me, saw I could doodle and moved me into the graphic department of the paper where I did charts, maps and story illustrations for three years. Occasionally they’d let me off the leash long enough to draw an editorial cartoon. I answered a blind ad in the newspaper trade magazine Editor and Publisher for a “sports minded” artist in 1982 and ended up in Denver drawing sports editorial cartoons for the Rocky Mountain News until it folded in 2009. I continue to draw for a number of clients including the Chicago Tribune, 9News in Denver and Universal Press syndicate. I also draw for the Guadalupe County Communicator in Santa Rosa, New Mexico which I love. A good friend and former colleague of mine from my days at the Rocky, ME Sprengelmeyer, is the publisher. Life is good when you have a gig that allows you to draw a motorcycle gang of feral hogs trashing a Mexican restaurant simply because the green chile has pork in it.

DL: Coffee, coffee and more coffee. Followed by a bowl of Cap’n Crunch and a few Underdog cartoons. Actually, it’s more complex than that and much like global warming, it’s harder to explain it than to just observe it. I read a lot, watch a lot, observe all kinds of things in daily life and then, in total silence, brainstorm it, all the while keeping in mind that I’m trying to convey a message in a concise and hopefully funny, hard-hitting, acidic, single-panel cartoon and not in a 1,200 page novel. It’s like making chicken noodle soup with noodles on the floor and pieces of chicken hanging from the ceiling. In the end you hope it tastes good, but the prep before and the cleanup afterwards is pretty ugly. 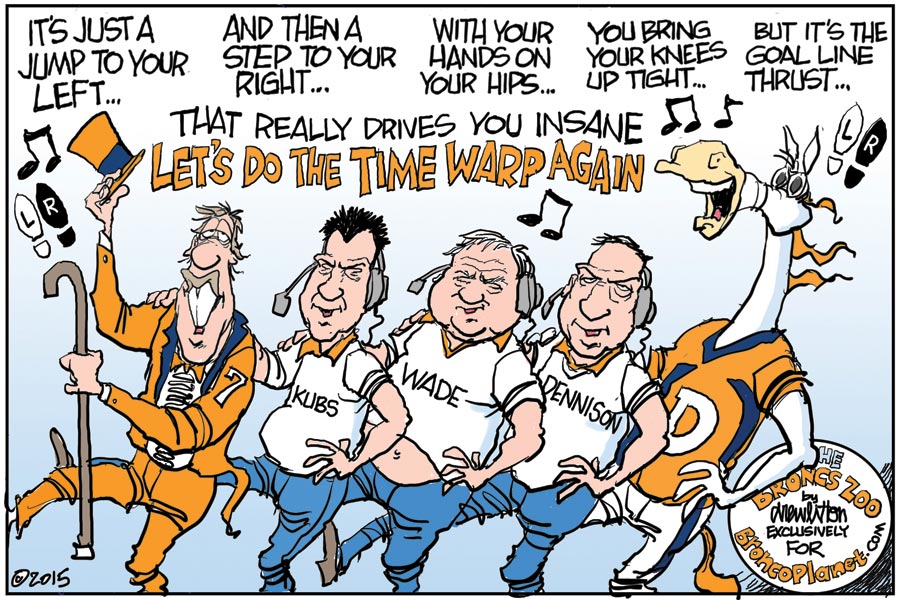 YS: How is the business different today?

DL: The Good: There are lots of places to have your work seen via the Internet. It’s easier to self-promote than ever and you have a higher chance of being able to stay home, drink lots of coffee and work in your pajamas.

The Bad: It’s much, much, much harder to make a living doing this than ever before. Everyone wants your work for free, because, after all, no one pays for anything on the Internet unless you are shopping on Amazon. And because newspapers are dying a slow and painful death, it’s much harder to have your work seen on a daily basis. The Internet is fragmented into a billion little pieces, so it’s easy for your blog, website, Facebook and Twitter postings to fall into a deep, dark cyber hole and never be seen or heard from again. And working in your pajamas is really very overrated.

The Ugly: There are far more truly talented creative people uttering the sentence “would you like fries with that?” than ever before. And that’s just wrong.

YS: Talk to me a little bit about Charlie Hebdo. Did you follow them much before the attack in Paris?

DL: Admittedly, no. That’s not to say I haven’t been exposed to the genius of the French cartoonist community who do things that completely boggle the mind. I’ve bought more than a few French graphic novels at the San Diego Comic Con throughout the years that make Calvin and Hobbes look like stick figures. They are a seriously talented group of people.

YS: What’s your opinion on their work?

DL: The Charlie Hebdo cartoons have always pushed the edge. Their work is visceral and, at times, even vicious. It does what it is intended to do. It shouts loud enough to be heard. That’s a good thing. We need people who do that. I know how powerful a single panel cartoon can be. It’s a visually appealing, concise form of commentary that is, unfortunately, dying in America. I believe in the right to the freedom of expression, which is a key component to our democracy. It’s the cornerstone really. Without it the whole thing comes tumbling down. Kind of like a bad game of Jenga.

YS: How do you think something like the Charlie Hebdo attack impacts your industry, long term?

DL: It provides a lot more attention to our platform. More people in the theater to see the show, so to speak. What we do to keep people coming back is up to us. But as far as the fate of the editorial cartoon in the U.S., editors and publishers have pretty much determined that already. They are killing the art form one layoff at a time. In 1982, newspapers across the country employed well over 200 full-time editorial cartoonists. Today that number is below 40. But it’s happening to photographers as well as writers too. It’s the Ice Age and we just happen to be the dinosaurs.

YS: Switch gears to something happier. Denver has a comic con now! What’s your take on it? Was last year your first year?

DL: It’s fabulous! Top notch and very well done! Last year was my second time going. I was at the first one a few years back before I took a wrong at Albuquerque and ended up in Dallas for a few years. The cons in Dallas were nowhere nearly as good as the one in Denver. Not even close.

YS: Plans to do it again?

DL: Yes I will be there again, with bells on and prints and stuff to sell. It’s a wonderful marketplace for folks like me. And besides, I can hang out with people who love Firefly, Batman, Looney Tunes and who dress up like it’s Halloween without the candy. So it’s full of my kind of people! 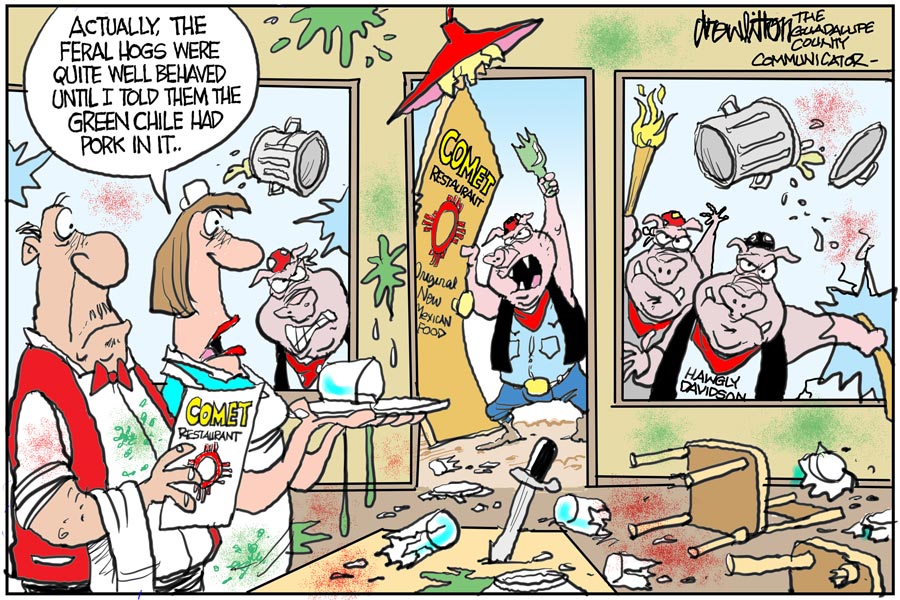 YS: Who are some of your favorite cartoonists and why do you love them?

DL: They are all pretty strange if you think about it. I mean turning real life into a cartoon world is strange. Even moreso if life weren’t already a bit of a cartoon at times. I’ve been asked to draw on someone. Like a tattoo. Only it wasn’t. And it was very, um, awkward. She was pretty, though. I declined. I’m not one to draw on complete strangers. And, besides, the ink works much better on paper.

YS: Who’s the toughest celebrity you’ve had to draw?

DL: Craig Morton, who used to play QB for the Broncos back in the late ’70s/early ’80s. I finally went and got the Andy Kaufman photo file for reference. They had a separated-at-birth kind of thing that helped. But, yeah, he was a nightmare.

YS: Ever had someone get angry about something you’ve drawn? What happened?

DL: Oh. yeah. I’m not on Denny Neagle’s Christmas card list. It was ugly, but thankfully didn’t end up in fisticuffs or anything. Just a lot of screaming. [Danny Neagle: Former Colorado Rockies pitcher who was accused of steroid use in the 2007 George Mitchell report, and also plead guilty to patronizing a prostitute in Denver in 2006 — Ed.]

YS: What advice do you have for someone starting out?

DL: Don’t draw for the money. Draw because you have to—because you love it and need it like the air you breathe. Because at this point, quite honestly, the money may never come. It’s a tough way to make a living. It was hard 30 years ago, it’s incredibly hard today. It’s kind of like bungie jumping off of Mt Everest. It’s not impossible. Just challenging.

Catch up with Drew at drewlitton.com and buy prints of his work at drewlittonstore.com. You can also follow him on facebook.