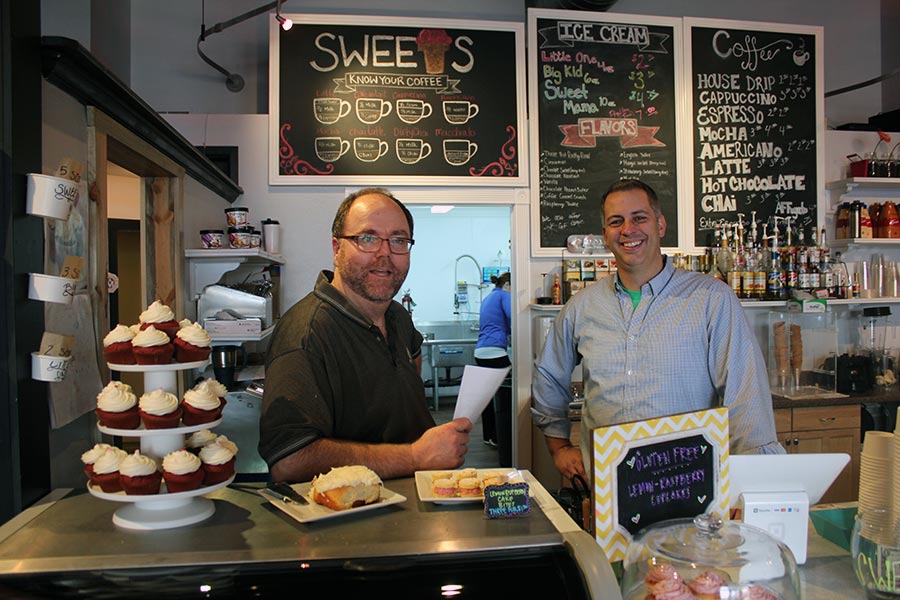 At 11 a.m. on a Thursday, Sweets is nearly deserted in more ways than one. The welcoming dessert shop is empty, and jamming out to Journey, but only briefly. Manager Mark Alexander is relieved for the little break before the lunch rush pours in around noon. A

“You just missed it, this place was packed and we were trying to hang a spoon over the counter,” Alexander said. “We only get a few little breaks throughout the day, which is a blessing in a couple of ways.”

The new addition to Briggs Street in historic downtown Erie opened its doors a little more than a month ago, and business has been sweet. The first costumer on opening day could hardly wait and came in 10 minutes before they technically opened and ordered a soy latte.

Since then, the mornings have been filled with commuters, and moms who drop their kids off at school wanting coffee, breakfast burritos and the popular cinnamon rolls. There’s a short break until the lunch rush, followed by the after school groups that come in for the food, ice cream and atmosphere.

There are no TVs in the small shop, but a bookshelf stocked with board games and plenty of tables, and a few couches, to relax at. There will never be a TV in the shop, and for good reason.

“We wanted Sweets to be a place for people to bring their kids and enjoy technology-free time with each other,” Alexander said. “We want this to be the place where a pimply teenager brings his hot, first date or for someone to come with their dog and enjoy a little ice cream or coffee.”

Owner John Jacquat, opened Sweets at the request of his wife. They brainstormed what to do with the empty building they owned, and came to the conclusion that people, including their two kids, loved ice cream. They even named the shop after their daughter whose nickname is Sweets.

“There are so many families in Erie, and we wanted something that we could make into a family place,” Jacquat said. “We had no idea it would take off this much, especially so early.”

It could be the delicious treats or the atmosphere, but there’s a whole group of people behind the counter who make the Sweets experience one to remember. Alongside Alexander, is an eclectic group of highschoolers and two chefs who stock the shop with something different each day. They keep the staples, like the cinnamon rolls, but Alexander tells the workers each day to go nuts and make whatever they want.

“It’s important to me that people don’t dread going into work,” Alexander said. “If there’s a time when that starts to happen, then it’s the world telling you that it’s time to move on.”

Alexander has been behind the counter since the day it opened. He hasn’t taken a day off, and that doesn’t bother him. He sets the example that to run a successful business there has to be commitment and diligence. On any given day, he can be found behind the counter making costumers laugh, or giving an ice cream tour to newcomers.

Making it a place people want to be, is his main goal. So far, he has succeeded.

“We have to kick people out,” Alexander said. “People want to stay, but we have to close. The other night this knitting group took up a table for hours just carrying on like they were at a bachelorette party.”

After a month of business, the shop is still growing and finding out what people want. It’s in the experimental phase, and people aren’t shy about expressing what they love about the store.

On Saturday, the shop is hosting its grand opening with a number of events throughout the day, with live music, story time for children, arts and crafts and a delicious 15 percent off all day.

“If someone comes in here unhappy, they won’t leave that way,” Alexander said. “We make sure of that”