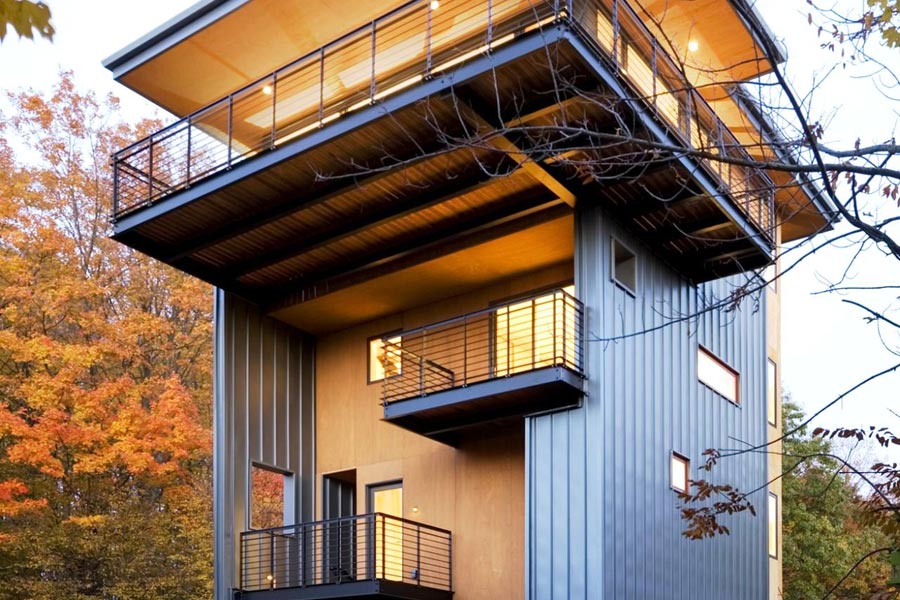 People tattoo themselves, put stickers on their car, dye their hair and do whatever they can to showcase their individuality. This also applies to homes whether it is a house, apartment, trailer or whatever. People have personality and sometimes their abodes do as well.P

Prospect New Town, a “New-Urbanist Development” in southeast Longmont is a riot of color and architectural style. It exudes personality. The former 80-acre tree farm now sports yellow and pink condos, bright green and orange color combinations and many various and unique color mixes. Cottage Living Magazine described this planned community, which began in the 1990s, as “colorful as a Lego tournament.”

On their website, Prospect touts itself as an antidote to conventional and sprawling suburban development. While other builders and planners are working hard not to offend prospective buyers via their various shades of tan houses Prospect continues to embrace a unique look. However, this comes at a price. 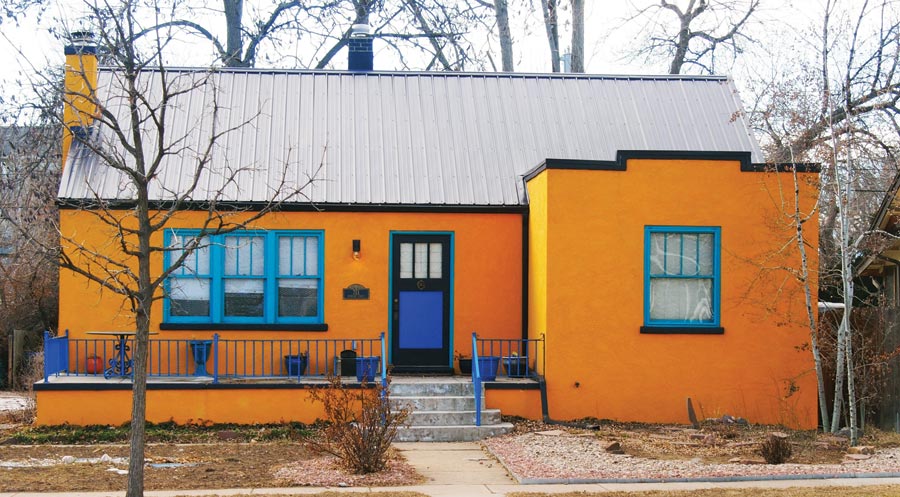 However, if the entire development is sporting agitating color combinations does it really epitomize individuality or does it represent more of a modern hipster group-think? Isn’t the lone bright yellow stucco house with bright blue trim on a block of older gingerbread homes more individual than a neighborhood of different-but-same upscale homes?

In an effort to appeal to everyone, new build developments end up with what is often considered bland dwellings. Front Range suburban areas with a lot of new build such as Broomfield, Superior, Erie, Frederick and Firestone are known for suffering from new-build blandness.

If expensive hipster pre-planned neighborhoods are out of financial range there are many options to stamp your own individuality on a bland home. Color is one tool homeowners use to stand out. Product marketing often influences color choices for homeowners. Benjamin Moore, a chain that sells interior and exterior paint releases a Color of the Year every year. For 2015 the color is “Guilford Green.” Their website states “Color layering is so easy, see how you won’t be able to live without it.”

If you can live without color layering and wish to stamp your abode with more personal expression there are other options. For instance, you can paint the Broncos mascot on your garage door as one homeowner lovingly did in the small town of Hygiene, just west of Longmont.

Plastic flamingos stuck in the lawn are a classic choice to let your neighbors know you don’t get your merchandise at conformity catalog shops at the mall. On Emery Street in Longmont one home showcases a flamboyance of flamingos in varying sizes and colors (“flamboyance” is the official term for a group of flamingos). 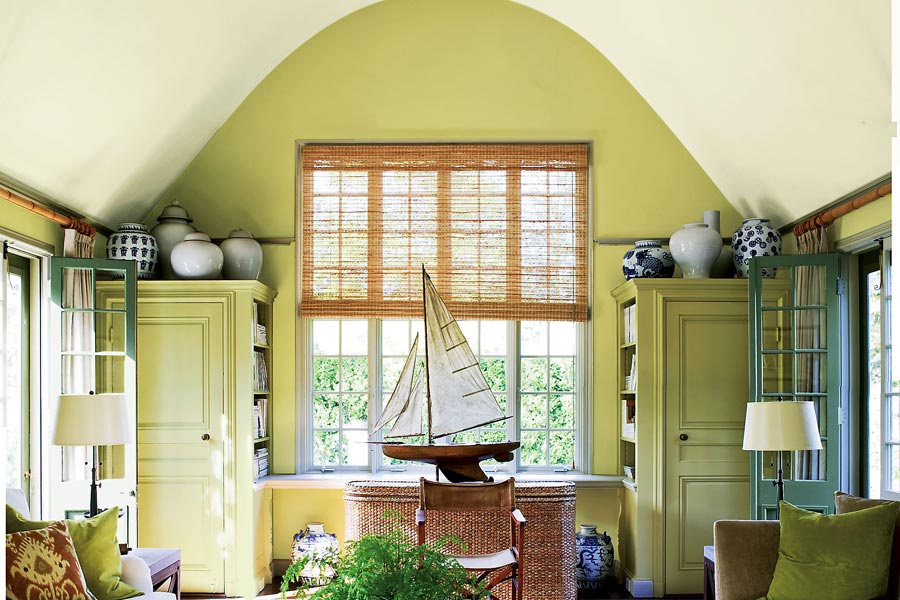 While uniquely decorated homes can be a satisfying form of self-expression for homeowners, they can engender very different feelings in neighbors, including anger, disgust and exasperation. But this is too bad for the haters of individuality in living spaces. It turns out that there aren’t any laws in Colorado that prevent people from painting their houses bright yellow or pink, despite what neighbors may wish. As long as the home isn’t dangerous and does not pose a health risk then color and style are a subjective choice left to the owner.

There are codes developed by cities that keep hazards from happening. These codes are meant to make communities safer, and enhance the health and welfare of communities. However, not everyone agrees that these codes are working. In the City of Boulder’s “Nuisance Abatement: Online Comments and Emails” section one contributor concludes, “Homeowners on the Hill are the bad guys. Ordinances do not protect us from trash, falling apart houses, weeds or bare front yards, abandoned cars and speeders and reckless drivers through our neighborhood.”

Code enforcement is difficult in cities where the police and other authorities are busy dealing with real crimes such as methamphetamine labs or murder. In fact, code enforcement officers even have their own organization. It’s called the Colorado Association of Code Enforcement Officials. It’s a non-profit. They offer certification courses and even an advanced certification course (for $350) that cover such topics as: Situational Leadership; Elected Officials Interaction; Neighborhood Law; and Collaborative Approach to Code Enforcement.

The City of Boulder shares space with the University of Colorado. This means students. Boulder even has it’s own code for couches on porches entitled “Outdoor Furniture Restriction in its University Hill area.” It is section 5-4-16 of the code. It basically states that “no person shall place, use, keep, store, or maintain any upholstered furniture not manufactured for outdoor use, including, without limitation, upholstered chairs, upholstered couches, and mattresses in any outside areas…” It also includes a statement that reminds residents “an alley shall not be considered a “public street” for the purposes of this subsection.”

In an effort to control the aesthetics of neighborhoods even farther than municipal codes Home Owners Associations (HOAs) were created. They started in the early 20th century and grew in popularity as World War II ended and large housing tracts began to appear. Often, they tried to keep out single parents, people of color, and non-Christian religions. As these HOA covenants were legally challenged they gave birth to, in part, the Fair Housing Act. 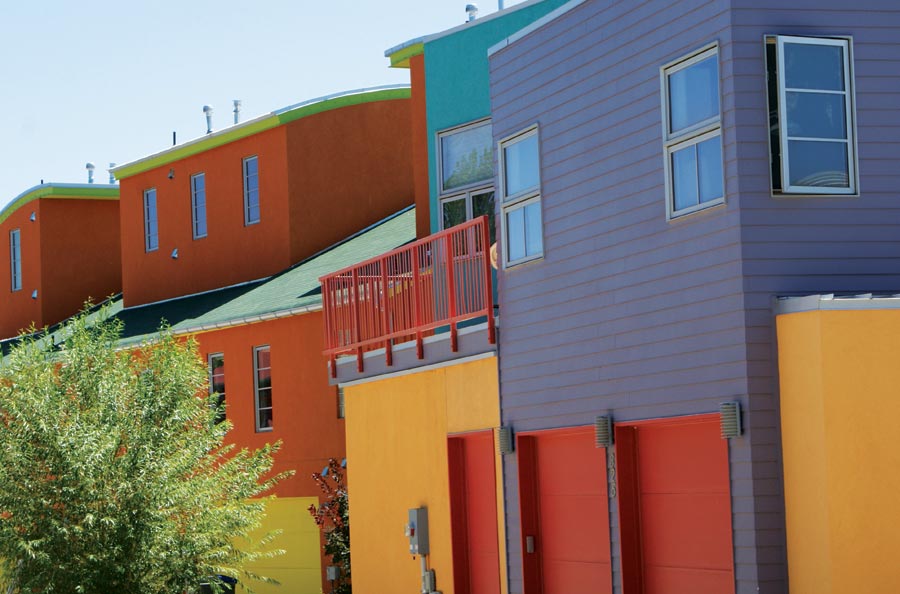 Today, HOAs often oversee covenants regarding lawns, exterior paint colors, signage, etc. in small and huge neighborhoods alike. An HOA is a legal entity, usually created by the original developer of a community.

In Broomfield the Broadlands is a sprawling suburban development. In their recent January HOA Broadlands newsletter, residents are reminded that the Broadlands Design Guidelines require that holiday lighting and decorations be removed in a timely manner. “Please plan to pack yours away by February 2nd,” the newsletter states.

This same newsletter also states “Before you make any modification, change or addition to the exterior of your home, an application is required for the Modifications Subcommittee to review. Don’t be misled by well meaning friends, neighbors or contractors.” 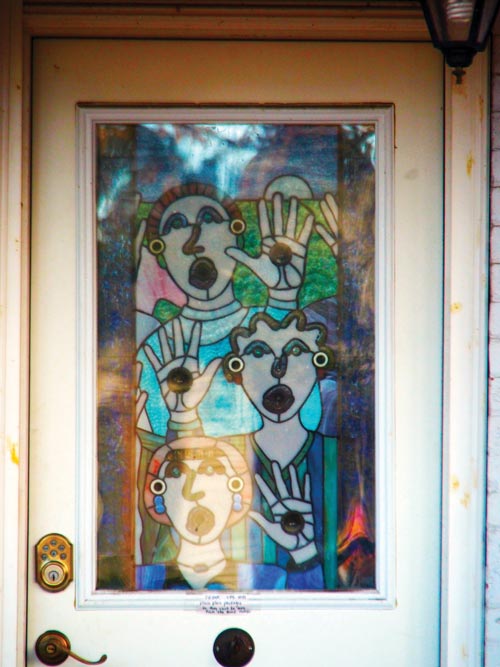 In the blog “Colorado Homeowners Association Law attorney Gina Botti posted, “While owners have a legal obligation to comply with the covenants and rules, this may not extend to rules that are in violation of or contrary to local, state or federal law.” State and Federal laws trump HOA laws.

According to Paul Fussell, author of the book Class: A Guide through the American Status System, it is the middle-class that worries the most about what kind of status their homes convey. In a discussion of lawns Fussell says “Finicky neatness here is usually a sign of social anxiety, a tip-off that we are approaching middle class premises. If there’s no crabgrass at all, we can infer an owner who spends much of his time worrying about slipping down a class or two….”

Fussell also admits that neglect of one’s lawn in middle class neighborhoods can invite terrible retribution. Urbanist and author of the book The Social Life of Small Urban Spaces William Hollingsworth Whyte, agrees with Fussell. “The sanctions are not obvious, but the look in the eye, the absence of a smile, the inflection of a hello, can be exquisite punishment, and they have brought more than one to a nervous breakdown.”

While this is great news for fuchsia-loving colorists this is often bad news for neighbors. If you just can’t stand the large Kokopelli statue in your neighbor’s yard don’t immediately call your city officials. First, find out what the laws in your area are. Make sure that you aren’t in violation yourself. While you may hate the collection of gnomes your neighbor proudly collects it could be your 1984 Corvette you’ve meant to work on for three years that is actually in violation. So, clean up your yard and house first before you start making accusations. Better yet, if your neighbor is letting their house or lawn decay offer to help clear the mess.

Often, people showcase their identity without really even trying. Leaving several cars in the front or side yard is an example. While this is not uncommon it’s also an indication of not really caring what your neighbors think. In areas of rural France homeowners often leave outside rusting and just plant flowers in them eventually. While this may work in France it often doesn’t work in Colorado. Old rusty items left to rot and then planted in France have a certain je ne sais quoi style that few in the Front Range can pull off. 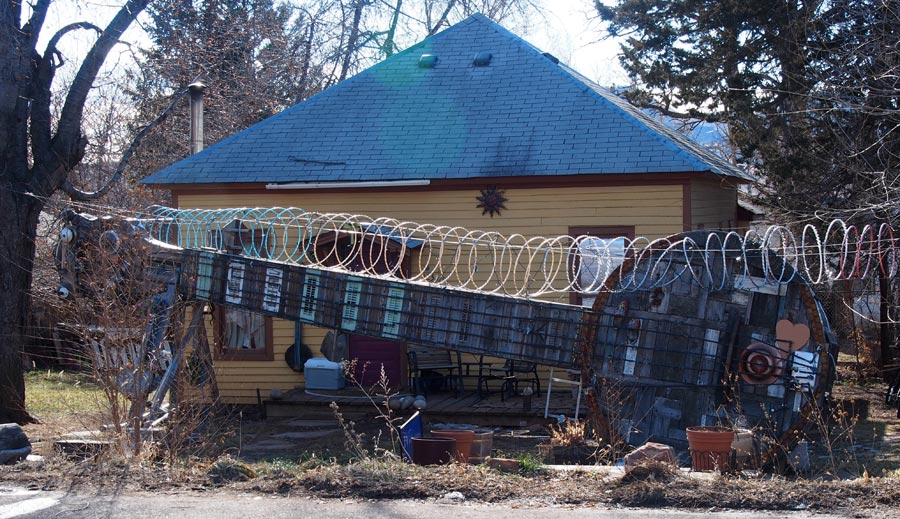 Others, such as artist Jacob Adriaan Leeuwenburg of Lyons, in the northwest of Boulder County, just decided to go for it. In 2008 or 2009 (he’s not sure) he built a 28-foot banjo in the front yard of his Lyons rental property on Reese Street near Fourth Avenue. The banjo, which sits on its side in the bluegrass-centric town is technically the second-largest banjo in the United States. The largest banjo lives in a water park in Branson, Mo.

However, Jacob’s banjo is made entirely from recycled materials and many found items as well. He also keeps a large flock of chickens which run around his yard. Spiral lights top the banjo and at night light up many of the artistic items he has in his yard. Sometimes music emanates from the banjo.

His neighbors, he says, have had all positive comments about the banjo. “One neighbor even got me new lights because she thought the old ones needed to be replaced,” he said. One neighbor, who lives very close and did not want her name used, said “I’m a little tired of the banjo. It’s been really fun but it does get bright at night.”

Jonelle Tucker, a Colorado real estate agent says “properties that are too unique can take longer to sell and may not get as high of a price unless the uniqueness has some type of financial value or is symbolic of status.” Indeed, a fleet of collectible Porsches sends a very different message than a blessing of unicorn statues (“blessing” is the actual term for a group of unicorns). When asked what she would tell a homeowner with a bright pink house Tucker replied “Depends where it is. In general, people seem to try and personalize their home if they have the time, money and interest.”

Not everyone can afford the time or money to individualize their space. Splashy paint, yard art or statues all require time and money.

However, for those who wish to stamp their personality on their dwelling, plastic flamingos are sold everywhere on the Internet and usually cost under $10 – and you can take them with you when you move.

View all posts by katherine weadley →