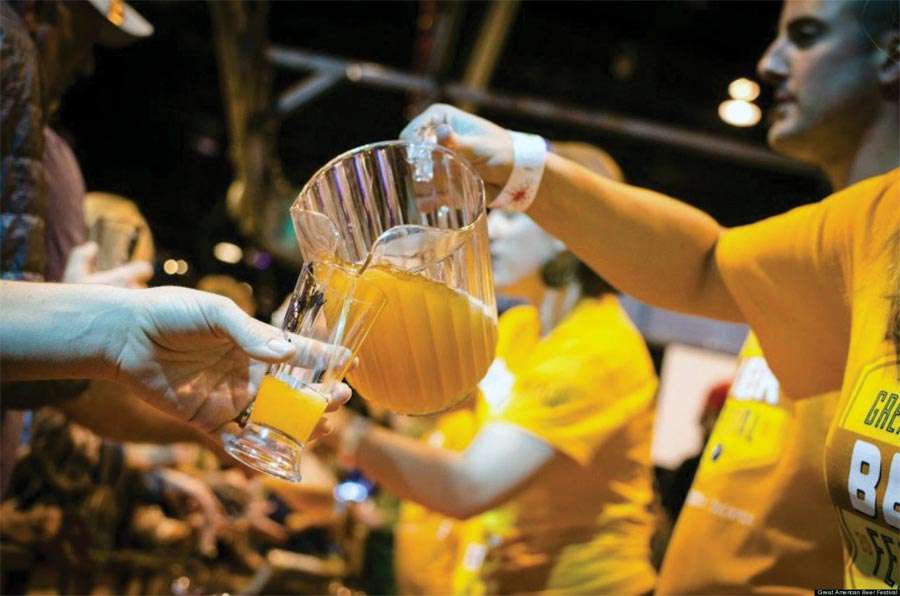 One of the benefits of the craft beer boom is the viral growth of beer festivals. Without exaggeration, you can find a beer festival, or one that touts dozens, of craft beers being served, on every weekend from Mother’s Day through Halloween.O

But not all beer festivals are created equal. The proliferation has forced craft breweries large and small to pick and choose what events they attend. At festivals where you pay a fixed price and get to sample beers, the breweries are basically giving away their beer. At other events, where beer is secondary to music or food and you can purchase a more substantial pour, there is still the issue of staffing. Small brewers often don’t have the people to send to festivals beyond their back yard and the larger operations get so many invitations that it is impossible to make it to all of them.

So we at Yellow Scene have done some homework and come up with the best summer beer festivals in and around the Front Range (with an outlier or two) that are worth your time and mileage.

The Great American Beer Festival, Sept. 24-26; Colorado Convention Center in Denver; coloradobeerfestival.com.
The granddaddy of all beer events, the one that started it all and that continues to lead the way with its focus on food and beer pairings, is the Great American Beer Festival. Tickets go on sale to the general public through Ticketmaster at 10 a.m. Mountain Time on July 29. The 34th annual GABF is growing this year by 90,000 square feet thanks to demand from both beer enthusiasts and craft breweries alike. The extra space will certainly help with crowding and make it possible for another 120 breweries to join the more than 700 breweries that last year poured more than 3,500 different craft beers to 49,000 attendees. And they’ve even locked in next year’s GABF dates, so mark your calendars: Oct. 6-8, 2016.

According to Barbara Fusco, Sales and Marketing Director for the Brewers Association that puts on the GABF, they expect about 60,000 attendees and more than 800 breweries at this year’s festival. Given that by this time next year the number of breweries in the United States will have surpassed the peak number prior to Prohibition, it’s good that the well-oiled machine that is the Great American Beer Festival found a way to grow at least a little. Nothing ruins a good time more than greed (long lines, high prices), so it’s nice to see the folks running the GABF are focused on quality, not quantity. Expect less crowding this year, relatively shorter lines (you’re still going to have to wait for your Dog Fish Head and Cigar City samples) and no price increase (it’s still $80 for each of the three public sessions).

Because GABF tickets sell out in minutes, serious beer fans should consider joining the American Homebrewers Association. The $38 annual membership allows you to purchase festival tickets a day early. Even more important is that starting this year, tickets to the far superior Saturday afternoon tasting (the most mellow and less crowded of the four) as well as the Farm to Table Pavilion (gourmet food and beer pairing) are being offered only to AHA members.

And considering that an AHA membership will pay for itself in a matter of months or weeks thanks to member discounts at breweries, restaurants and shops (nearly three dozen in Boulder County alone), the early bird GABF ticket benefit is huge. But don’t wait; you must have purchased your AHA membership by July 19 to get the pre-sale deal.

Boulder County Beer Festival, Aug. 7-8; Boulder County Fairgrounds in Longmont; coloradobeertrail.com
For 145 years, the Boulder County Fair has been a showcase for locally produced products and the people who produced them. From displays of gold and silver bullion to flowers, vegetables, grains, livestock, manufactured items, farm machinery, crafts, baked goods and jewelry, you can pretty much find it at the fair. Until this year, there was nary a mention, let alone samples, of what is arguably the one agricultural byproduct for which Boulder County is most renowned: craft beer. Starting this year, the folks at the Longmont based Colorado Beer Trail have set out to change that.
From 5-10 p.m. on Aug. 7 and 8, the Colorado Beer Trail will present the first Boulder County Beer Fest on three acres at the southwest corner of the fairgrounds at Nelson and Hover roads. Samples from at least 30 of Boulder County’s 67 breweries will be on tap, according to Colorado Beer Trail President Scott Conlin.

In addition to serving up samples of beer, each day’s session will feature panel discussions with both new and veteran brewers and producers of raw ingredients (hops and grains) about their industry, its agricultural roots and the future of craft brewing.

“First and foremost, we want to have a good selection of Boulder County brewers — from small, new ones to the big, established breweries,” Conlin said of the panels. “We want to create an entertaining educational experience for the attendees, because at its heart, the Boulder County Fair is about educating the public. And with a county focused beer festival, we want people to learn about the various agricultural elements of the brewing industry here in Boulder County.”? For $25, attendees get a tasting glass, program chock full of information and history about the county’s brewers in particular and the brewing industry in general, Conlin said. There will also be local bands and Boulder County licensed food trucks on hand.

The Colorado Beer Trail recently presented the second annual New Brew Fest in Niwot on May 9 and is in the business of marketing and promoting Colorado craft brewers of all sizes. “Most people are familiar with about 20-30 Colorado breweries; our job is to introduce them to the 250 other craft breweries they don’t know,” Conlin said.

Colorado Brewers Rendezvous, July 11; Riverside Park, Salida; salidachamber.org
Salida is a ways to travel for a beer festival, but the 19th annual Colorado Brewers Rendezvous is worth the road trip. Proceeds from the $40 GA/$100 VIP tickets support the Colorado Brewers Guild and local chamber of commerce. The former not only promotes breweries large and small across the state, but will this year be enjoining voters to serve up a beating should the evil initiative making it possible to sell full strength beer in grocery stores make it on the ballot in November. The kick-ass craft beer culture and robust industry in Colorado is due in large part to the fact that grocery stores can’t sell full strength beer and brewers can self-distribute their beers. Allowing beer in grocery stores will cripple our thriving craft beer environment, make it even harder for little start-ups to survive and thrive all while making inconsiderate corporate grocery chains richer at the expense of us, the loyal customers.

The price of admission buys you a commemorative tasting glass for unlimited samples and the VIP ticket includes a t-shirt, lunch, private tastings and an extra hour to taste the beer from more than 70 breweries. Brewers believe in and support their guild, so the breweries that attend bring their A game (and beers).

Pairsine, Chefs Fine Food and Beer Pairing Competition, July 15; Omni Interlocken Resort, Broomfield; pairsine.com
If you’re a foodie who loves beer, this is the event for you. Other beer festivals “have” food, but the Pairsine features culinary creations paired with award-winning beer from the 2015 Denver International Beer Competition held earlier this year. The result is great food expertly married with great beer. The competition involves a professional panel of judges that choose “Best Chef” and “Most Creative Chef” among the 10 participating Colorado Master Chefs, but their decisions are chump change in comparison to the coveted “People’s Choice” award, voted on by those in attendance.
And while the carefully constructed cuisine is served in bite size portions with ample samples of each companion beer, you can have more than one, ensuring you won’t go home hungry. The $75 ticket includes food, beer and even beer-paired desserts served around the Omni pool from 6-9 p.m. The event also incorporates a silent auction that this year will benefit There With Care, a services provider for families in medical crisis.

Telluride Blues and Brews, Sept. 18-20; Telluride, Colorado; tellurideblues.com
This three-day festival combines the best music, beer, mountains and people that Colorado has to offer, resulting in a pretty much perfect package that will weld a smile to your face that won’t fade until well after Christmas. Yes, the picture perfect box canyon holding the historic mining town of Telluride is surrounded by cliffs, waterfalls and dense pine forests that could only get better if you injected swaths of vivid gold aspens undergoing their changing of the fall color guard. Which, in mid-September, you most certainly do.

And just as the town’s legendary bluegrass festival has eschewed a strictly bluegrass lineup in selecting its acts over the years, the blues festival likewise isn’t confined by its namesake genre. This year, for instance, you’ll find The Blind Boys of Alabama singing their gospel soaked standards sharing the stage with raw and rowdy Reverend Peyton’s Big Damn Band. And the next thing you know, the legendary Gregg Allman will be loading up his all star band into one of his timeless classics and taking it for an off-road musical romp into territory that only hours before was being shredded by Anders Osborne.

No less eclectic and transformational are the more than 170 beers from nearly 60 breweries (mostly from Colorado) on tap at the Saturday Grand Tasting from noon to 3 p.m. The prodigious selection of top shelf choices begs to be sampled in some sort of sane, systematic manner. But that strategy evaporates in the face of rare offerings from the far corners of our fair, square state.
Of all the festivals mentioned here, Telluride Blues and Brews demands the most of ones patience, gear and preparedness, especially if you choose to camp. Not only will fall temperatures swing from a searing 85 degrees during the day to sub-zero at night, brisk breezes can give way to white-out graupel coming down sideways in a matter of minutes. Which begs the question of what gear to bring. If you own it, bring it; if you don’t, you’ll wish you had.