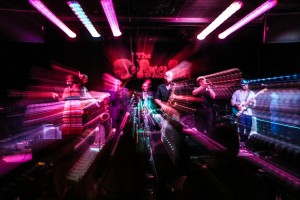 Boulder funk troupe the Pamlico Sound plays the Dickens Opera House at the end of November, so we chatted with frontman Will Baumgartner…

Yellow Scene: When did the band form and what was the mission?

Will Baumgartner: We did our first show in late September of 2010. Basically, I had led a few bands here in Boulder that were a little bit more rock, and I just decided that I really wanted to put together a band that focused on funk and soul and not diluted much. So I got together with a bunch of players and we started getting popular really fast, lucky for us.

YS: Describe the sound. Does it have a traditional funk feel?

WB: I see it as a continuation of the type of thing that Sly and the Family Stone, George Clinton and Parliament Funkadelic, that type of stuff. If you mean traditional in the sense of James Brown and Aretha Franklin, no, we’re not that traditional. We’re a little more experimental than that. But still, our main influences come from the classic period of funk, the 1970s and early ‘80s. But even at that time, there was a lot of stuff being experimented with. Clinton was collaborating with hip-hop people and incorporating that into his sound. Sly and the Family Stone were incorporating elements of pop and rock into their sound and also, none of them were afraid to jam. All that stuff – the psychedelic, and especially with Clinton and his unusual experimentations – we’re open to all that kind of stuff. It’s been going on for a long time.

WB: We love playing there. We’ve never had a bad show. I think this is going to be our third or fourth time there. Being Boulder-based, we try to space out Longmont shows so that we can tap an audience and not spread ourselves too thin.

WB: We have a bunch of new material. There’s a good chance that we will be using this guy who plays a mallet synthesizer – I think he’s going to be in that show. There’s a good chance that we’ll have at least one special guest. We’re also incorporating a theatrical concept into our performances, and we call it “the jive church.” I play this pastor/preacher who delivers sermons about funk, the spirit of funk and so on. We bring people up on stage and spray them with a water bottle. It’s a lot of fun and not serious. It’s a quasi-religious thing.

YS: When this show’s done, what’s next?

WB: We’re going to record in the early part of 2016, get some of this new material recorded, and we’re looking at recording with Josh Fairman who has recently been recording people like the New Mastersounds, Atomga from Denver, and he’s getting quite a reputation for recording really authentic sounding groove-based music. I’m pretty sure that we’re gonna record with Josh. That will probably happen in January or February. The release would then be late March or April.