Best Wrestling In The Region 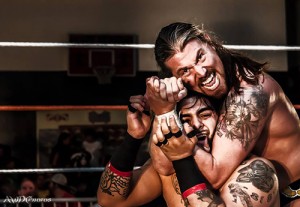 A chance conversation at an Ohio mall introduced then-17-year-old Matt Yaden to professional wrestling. This ostensibly unremarkable event set him down a path that would include a stint with national promotion Total Nonstop Action and eventually owning and operating his own Colorado promotion, New Revolution Wrestling.

YS: What was your role in TNA?

MY: My technical title was Production and Travel Services Manager. On the road, I had to track everybody down, get things taken care of. If there were autographs that needed to be signed or medical stuff that needed to be done – that was my role there in the office. And then while I was there, I was able to wrestle in their developmental territory at the time, [Ohio Valley Wrestling].

YS: How does owning and operating NRW and the Mercury Pro Wrestling Academy compare to working for TNA?

MY: It’s still pro wrestling, so you’re trying to figure out how to market your brand, put shows together, tell compelling stories, put compelling characters out there. For me, the major difference is with TNA, I worked for them. But when you’re 100-percent responsible for the wrestling school, the wrestling promotion, and getting the word out, when it all falls on your shoulders, it’s a little bit different. Even though NRW is on a smaller scale, I have to deal with a lot more, because I’m kind of in charge of everything that goes on.

YS: What makes NRW stand out from other Colorado promotions?

MY: The number of shows that we run. We’re the only ones that tape for TV. We have a TV show called “NRW Charged” that we put online every Thursday. It’s out on our YouTube channel and on the website. So we’re the only ones that shoot footage like that, to give wrestlers the opportunity to have professionally edited footage. We also use the talent that comes from our Mercury Pro Wrestling Academy. Nobody else comes close to the training schedule of these guys and girls. It makes a big difference in the quality of matches that you’re going to see. And the fact that we shoot a TV show that airs weekly – you get a lot more storyline build and a lot more character development than you do anywhere else.

YS: How do you enjoy wrestling in your own time?

MY: You have to keep up with it to kind of keep relevant. You never, at least in my experience, get tired of it. When I watch a wrestling show or a match, I might look at it through different eyes than someone that just watches it as a fan, but I still love when great characters are displayed, when great matches are put together. I still get emotionally invested in moments just like anyone else would, and that’s just a love for professional wrestling itself. That never goes away.

YS: A long history of concussions recently forced former WWE Champion Daniel Bryan into early retirement. Considering head injuries are such a significant topic these days, how do NRW and MPWA address them?

MY: It’s all about safety. You can monitor and you can be extra cautious as much as possible, knowing that injuries are going to happen, concussions are going to happen, but they’re nothing to mess with. If anybody even seems to have any signs that they might be concussed, that they’re a little loopy, we’ll err on the side of caution. We do have an athletic trainer that’s there for the shows to monitor wrestlers. If we have people who are hurting themselves or it’s apparent they’re not being safe, they’re pulled right away so they can’t be a danger to themselves or whoever they’re in the ring with.

YS: What other work does NRW do?

YS: What about NRW makes it good entertainment?