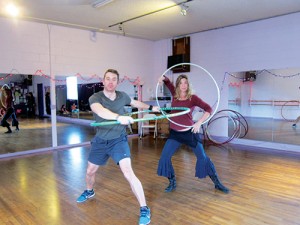 Dance is an ancient art, the rhythmic expression of humanity’s deepest grace. For some, like Martha Graham, Gene Kelly and Rhianna, dance floats them above the hard Earth, toward flight. For others, not so much. My dance style has been said to look like a dude with a dislocated shoulder trying to pop it back in again. When dancing breaks out at a wedding, it’s my opportunity to gracefully dance over to the chocolate fountain. The most dancing I do in my regular life is wiggling my hips to re-adjust my underwear.

Nevertheless, this Exercise and Outdoor Column continues its effort to Get Physical Exercise in Unconventional Ways. Dancing improves cardio, tones muscle and lowers dementia risk. So this month I took four different dance classes. They’re easy to find in the north metro / Boulder area, as common as SUVs sporting “Save the Environment” bumper stickers or street beggars who have trust funds. There is swing, belly, Zumba, jazzercise, tap, ballet, modern dance, silk. There are two pole dancing classes. And a woman named Elizabeth Marberry gives a “Wedding Dance” class — “so you don’t just rock back and forth the entire first dance.” If her weddings are like my family’s weddings, she may want to add to the curriculum: Drunkenly Taking a Swing at Your Second Cousin.

The first dance class I took was at Alchemy of Movement. (AlchemyOfMovement.com. 2436 30th Street, Boulder, 80301, 303-449-4410.) It’s co-owned by Lucy Wallace who, as a hobby, teaches dance to women in maximum-security prisons. You’d think being in prison would dampen your enthusiasm for doing the ney-ney, but Wallace says that her felons can groove. At her studio, I twice took the class “Soul Sweat,” from Erin Ross. Ross moves like a forest sprite trained by the Jackson 5. The women in the class – and they were all women except me -followed her sliding, groovy movements of kicks, twirls and sidesteps, and flowed beautifully. Meanwhile, I danced as smoothly and predictably as a marble let loose in a bouncy house. Still, I liked it; the blisters on my feet and the soreness in my thighs attest to the quality of the workout; I’ve since gone back twice, and I’m slowly learning the dance steps.

Learning dance steps has known psychological benefits. Eric Freeman, owner of Salsaville Dance Studios, said that the intuitive nature of dance had not only given him a hobby that become a job, but has helped him out of his head and improved his confidence. How confident is he? His name is Eric Freeman, and he teaches Latin salsa. It’s like if a dude named Sir Winston Higgingthorne taught catfish noodling in Lake Okechobee.

So, spurred on by Freeman’s promises of self-improvement, I tried again. I took Hula Hoop Dance at Kakes Studios at 2115 Pearl St, Boulder, from Kristina Sutcliffe. (Odance.net, 303-918-6617). Sutcliffe flows like wheat blowing on a Kansas plain. The class consisted of me, my girlfriend, and two ten-year-old girls. She taught the class enough hula-hoop basics that we would not look silly hula-hooping solo on the edge of the RockyGrass festival. But it was, again, oddly nerve-wrecking for a non-dancer like me. The two 10-year-girls were doing different hard tricks, like walk-the-dogs, reverses, neck spins. Meanwhile I was dropping my hoop and, at my best, gyrating like an unbalanced Maytag dryer. It was like “13 Going on 30” or “Big,” one of those movies where a character zaps into somebody else’s body. I felt like the 10-year-old kid who doesn’t know how to get into Double Dutch. (These girls would never let me sit at their lunch table.) I eventually got some basic tricks, and Sutcliffe’s hula class is a fun, groovy way to spend a Saturday morning, and my hips were pleasantly sore the next day.

My last chance to let go and find my groove was “Ecstatic Dance” at Free Motion Boulder. (FreeMotionBoulder.com, 2126 Pearl Street, 720-379-8299) Free Motion is owned by Lisa Fasullo, who has deep sympathy for non-dancers like me. “A lot of people feel self-conscious dancing,” she writes on her website. But she sees a “powerful transformation when people simply start to move their bodies.” “Every time I dance,” she told me, “I feel like a better version of myself.” Free Motion resembles a new-age nightclub. In fact, it was new age as all heck; the class might be summarized as “An Indoor Phish Concert.” DJ Treaphort spun awesome grooves while 10 strangers danced however they wanted to. They danced on all fours. They rolled on the ground like cats. They sat and read tarot cards. They danced like those air-blown dancers at used car lots. And, as hippy as it was, as unstructured as it was… I loved it. Fusillo was right; free-form dance is by far the most comfortable dance class for non-dancers, since there’s nothing to do wrong. It was the most Boulder thing I’d been to in a long time. It’s so absolutely Boulder that it makes couch-burning and Zip Code Man seem like they belong in Pyongyang.