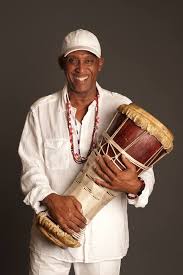 In 1973, Herbie Hancock led a recording session that changed the face of jazz and popular music profoundly. That album, called Head Hunters (Columbia), established jazz-funk fusion as a new force—and it became the moniker of the band he assembled for that recording, which included multi-instrumentalist/percussionist Bill Summers. Here, Bill talks to us about being a part of such a seminal moment in history, betting on the ponies, and helping today’s youth protect their intellectual property better than he did.

French Davis: How did you come to be a part of The Headhunters recording in 1973?

Bill Summers: Let me take you back a little ways. I think it’s important how I met Herbie (Hancock). I was a senior in high school and dropped out. I was a musician and played in clubs and had odd jobs…I joined the Ford Motor Company and worked on an assembly line. I did that for about six months and they kind of taught me what slavery was. So I quit that again and got a job at a Detroit race house. This was a big incident that changed my life. So here was a black guy who was shining shoes there. Employees would go over to him and he’d place the racing form and if you won, he got a percentage of it. So I got chip money playing on the horse races.

One day I won a horse race—they called it the daily double where you had to [pick winners] in two different races…For my age, 18, it was a lot of money. The first thing I did was take a trip to San Francisco, California. So I got to San Francisco, and I’m a high school drop out. I had relatives there. My uncle said if you were a resident of California, you can go to college free! I couldn’t believe what he was saying. I asked how could I do that? I mean I don’t have a diploma…so how could I do that? He went everyday and talked to them about me to UC Berkeley; I can’t believe they accepted me!

My senior year, I was a music major and a graduate TA [Teacher’s Assistant]. I don’t know if they do that anymore. I had a group that did African, Haiti, and Brazil-type music. We opened for Herbie and that’s how I met him. We were at this concert and he asked me if I would come and sit in with his band! It didn’t go so well. I played sax but also percussion, kind of valuable since I could do both. [Later on] I got a call from him asking me to drive to L.A., my first paying gig with him. I said all I saw on the stage was a harp and piano Herbie said that’s all that’s going to be. You and Alice Coltrane.

FD: So did you know you were creating a new era in Jazz? Did you have any idea how revolutionary that would be?

BS: No of course not, no. Kind of a big dream. Can’t really call it hip-hop music. But kind of similar.

FD: Here we are, what, 43 years later: What are some of the ripple effects of that album? How did it impact your career?

BS: Some of it was constructive, some negative. Went platinum—my first recording with Herbie. I’m on four songs and two of them became extremely famous. One was called “Chameleon” and one “Watermelon Man,” I composed something really different and exotic… So years later, this recording? Yeah, I shared none of the residuals of that.

BS: Back in the day you could record a few seconds of a song, maybe four or five seconds and loop that over and over. It gave birth to creativity with new technological advances, compose and recompose. This song “Watermelon Man” became one of the most widely traveled sounds, and the CD went double platinum. It expanded my relationship with Herbie. I love him like a brother. But the fact of the matter is, the future of music and how young people are treated have a lot to do with how us who are older speak up to the injustices. Do you stand up and tell the truth and hope no one gets hurt? I mention this over the years to the people that interview me because these are not accidents. We were seriously abused.

It was against the law to teach African American heritage. There’s a lot of catching up to do, understand what I’m saying? So when people wrote black music it was very powerful. We couldn’t participate in the business of music. People like Jelly Roll Morton and Scott Joplin were being taken advantage of. So this thing that happened to me is and was part of the fabric of the music business at the time. Unfortunately some of the people that were involved became the abusers. But at the same time I traveled around the world. I launched my career, and that’s it. There weren’t too many guys playing professionally. It wasn’t usual to see an African American percussionist, it was a rarity.

FD: I would love if you would talk a little about working with Quincy Jones as a contrast to Herbie.

BS: Well, Quincy Jones is like the top of the heap. You’re with, like, the Minister of Culture. I can’t say enough about him. We talk fairly frequently considering his schedule and who he is. I worked with him on the ABC (TV) series Roots. I was asked to support a musical tour of some of the scenes in episode one with Kunta Kinte, a very special experience. I don’t know what to say about him, he’s a completely regular person. He knows how to get the right people together. He plays people like a champ—Ella Fitzgerald, Sarah Vaughn, Dizzy Gillespie, for just one song. He’s incredible. Most of all he’s a great person, a nice person. He’s nice really nice.

FD: I would love to get your take on the state of Jazz today.

FD: What else are you working on?

BS: I’ve got a couple of projects I’m involved in. One is NUMM — New Urban Music Movement. NUMM has a lot of satellite projects and works with lots of young people. We have something called KLUB K.I.D. (Knowledge, Independence, Determination). We go into high schools and teach the kids to set up a complete entertainment company which contains a lot of stuff. They have to open a business, set up an LLC etc. They have to do paperwork. They come to the campus and do a talent challenge and sign a recording contract. They have to arrange the music, go into a studio with professional engineers, record the project by learning all the aspects in production and engineering, and get it done. They have to do the recording, labels, publishing papers, artwork; manufacture the project and they have to shrink-wrap it. Commandment number one is to get paid. Instead of getting ripped off like I did, they have to know how to protect their intellectual property. We use the history we have and they learn from that. We teach them the good, bad, and the ugly.

Bill Simmons and The Headhunters play  a tribute to Herbie Hancock at the Fox Theatre on May 13 at 8:30 p.m. Tickets are $25, www.billsommersepk.com for more information.