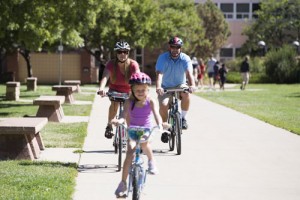 Fortunately for casual riders like myself, there are many less intense options for cyclists. Modern cyclists can now design every component of a bike to set up the perfect fit, regardless of skill set. Better yet, riders living in much of Colorado have the added benefit of one of the best cycling locals in the world.

It hasn’t always been this accessible for cyclists in the area – or worldwide. Early bike designs were produced as early as 1817, but were often clunky and inefficient.

In the 1860’s. the evolution of the chain drive was among the most important developments in bicycles, says Becky Macwhinney, Coordinator of the Bicycle Museum of America. That helped create the modern bike and was a foundation for improvements that are continuing today.

“People are always reinventing the bicycle,” Macwhinney says. “You can trace that back with the industrial revolution and the changes during that time and the improvements since.“

While the basis of the modern bicycle was developing in the 1860’s, the Colorado Territory was just being created. Boulder and Denver were just becoming towns. As the state and greater Denver area grew in the following decades, so did it its commitment to cycling. By the 1950’s, professional Hungarian cyclist Frank Barvic and his family brought high-level cycling to the area for the first time, helping to cement a biking reputation for the area that has continued to grow years after.

“Boulder has a really long history of being a really supportive town for cyclists,” says Boulder Convention and Visitor’s Bureau Director of Marketing KIm Farin. “It started years and years ago and it just continues to be that way. City leaders have listened to its residents and created infrastructure for cyclists.” 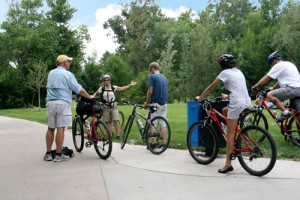 Boulder, along with Ft. Collins, is one of two elite Platinum Level cycling cities in the state,  the best possible ranking from the League of American Bicyclists. The same organization rates Colorado as the seventh-most bicycle friendly state in the country.

As a commitment to local efforts to enhance cycling, Farin also notes that many times bike paths in the area are cleared of snow before the streets.

“It’s the infrastructure and the residents’ desire to have a town that supports cycling,” Farin says.  “Boulder residents try hard to tie everything into biking.”

That they have. I would say this has been best articulated by tieing cycling into one of the area’s other beloved activities – craft brewing. Boulder recently unveiled a guided cycling pub crawl map. On top of that, casual cyclists like myself can enjoy cycling and a drink thanks to the proliferation of bike-based roving bars called Pedal Pubs.

“In Paris there’s a vending machine that has baguettes. In Boulder we have vending machines that dispense bike parts,” Farin says. “It’s a pretty big statement about what’s important to the residents.”

That’s not to say more competitive riders have been squeezed out of opportunities. Riders of nearly all skill levels have come to experience the area’s excellent cycling.

“You can ride out your front door and have world class roads and terrain in any direction you go,” says Jim Capra of Tyler Hamilton Training in Boulder. THT works with cyclists ranging from amateurs to pros to become better on two wheels.

Many of these professionals have taken up opportunities within Colorado. Capra estimates that at least 50% of pro cyclers have some sort of ties to Boulder, including Tyler Hamilton, THT’s namesake and a former Tour de France team champion. Hamilton trained here locally while becoming an Olympian.

“People like to think we have these arctic winters. Really, we can ride out almost any day of the year,” Capra says. 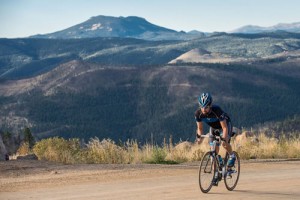 The weather and human commitment has spurred a great proliferation of resources for riders in the area. That includes for the bikes themselves. Customized bikes are becoming increasingly popular nationwide, and Colorado is no exception.

“There are more and more boutique, high-end frame builders locally that not only offer performance, but are works of art,” Capra says. “You can have a fully custom frame. You can design the frame work, paint, custom graphics, etc.  That’s one aspect for sure that’s growing.”

With so many options, this makes it easy to find the right bike, and the right fit. As any rider knows, a cyclists is nothing without a smoothe ride on his or her bike.

“It doesn’t matter whether or not it’s custom. The important thing is a good quality fit,” Capra says. “ At any level, the bike fit is super important. With the super custom size, you can get crazy expensive and not everybody has the opportunity for that.”

Capra says most experienced cyclists can eyeball adjustments to make sure riders are in good positions. Some of the most important things to consider are saddle height, cleat position and handlebar reach.

“Building your own, you get exactly what you want,” Lloyd says. He estimates about a third of riders in his cycling club are using custom bikes now. Of his six bikes, three have been customized.

On the other hand, Lloyd says off-the-shelf bikes also offer benefits. They are generally less expensive and don’t take the sometimes months-long effort to source and construct that custom bikes need.

Regardless of the type of ride, Colorado offers great opportunities for cyclists in both natural and human resources. These are bolstered by tangible efforts from the Colorado government to see the state get even better for two wheeled transportation. 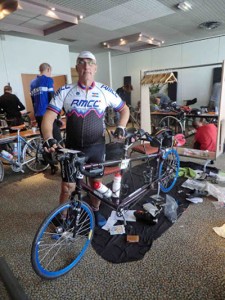 The Colorado Department of Transportation (CDOT) has had a cycling program for years, but increased its emphasis recently in part because of Gov. John Hickenlooper’s interest, says CDOT Bicycle, Pedestrian and Scenic Byways Section Manager Betsy Jacobsen.

In September 2015, Hickenlooper announced $100 Million in spending for bike projects in the next four years. Known as the Colorado Pedals Project, this initiative is designed to make the state the very best in the country to ride a bike.

Jacobsen also says the state leads nationwide in efforts to track cyclists and that some Colorado roads are up to 10% pedestrian.

“We’re always looking at what we’re doing and if we can do more,” Jacobsen says. “We look at cycling as a way to improve. Getting people out of their cars and onto bikes is a good thing.”

It’s only getting better locally, and statewide. Among major upcoming projects is the “16 in 2016”, a statewide effort to enhance 16 trails across the state, says Dan Grunig, Executive Director of Bicycle Colorado, a nonprofit that’s worked with the public and government for more than two decades to promote cycling safety and access. Grunig also says there are plans to finish the entire Colorado Front Range Trail, which will connect a cycling trail running from New Mexico to Wyoming.

“Colorado has definitely got some of the highest percentage of folks that ride bikes in the nation,” Grunig says. “I think we’re poised to grow even more with safer roads and easier access.”

These projects could also be a boon for the state’s tourism department, Grunig says.

“Cycling is one of the most popular activities for our tourists. By increasing the awareness and access to these resources, I think we’ll attract folks from around the world to see the great riding Colorado has.”

Local residents have seen this commitment through the completion of the US 36 Bikeway in March of this year. After nearly two decades of construction, there is now a nearly unobstructed bike path between Boulder and Denver. The trail is 12 feet wide with two-foot-wide shoulders and six-inch thick concrete for a safe, comfortable ride that ensures minimal upkeep costs going forward.

“I can say that it is nice to ride over this distance, and be separated from traffic with only two locations where you have to interacting with traffic (Sheridan/88th Avenue intersection and at Church Ranch). We are seeing a lot of use by both commuters and recreational users,” says CDOT Project Director Scott Rees.

Since the project’s completion in March, Rees says the trail has seen a steady increase in cyclists. It is now common to see more than 100 cyclists using the path per day.

Like Colorado, cycling has come a long way in the past 150 years. It seems almost natural now that a state with such varied and adventurous terrain would a foster a similarly diverse and bold group of people looking to experience all the area has to offer. Bicycle culture becomes a logical byproduct. With the continuity of topography and tradition, combined with the new growth and support from the community and the government, Coloradans can expect cycling to become an even more significant part of their lives.

“We have the reputation of being a healthy community and the cycling is at the forefront of a lot of that,” Lloyd says. The lanes and the roads help promote all that. There’s total upsides to every bit of that.”

“If you talk to a lot of cyclist, a lot of them will say it helped save their life. It almost does become a way of life.”