The Velodrome is sweet. And…what is that, exactly? 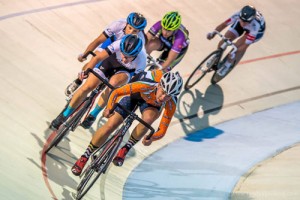 Boulder County is bike country. We embrace cyclocross, mountain biking, cruisers and little kids on Big Wheels. We shop Whole Foods in spandex, wear clicky-clacky bike shoes to parent-teacher conferences and spend more money on bike lanes than some cities spend on roads. Heck, we even tolerate spin class. But, to hear bike nuts talk about it, there was one big piece of bike culture missing: A velodrome.

And they built one in Erie.

“Great!” we hear you saying. “And …what the heck is a … velodrome? And how could it have been missing if I don’t know what it is?”

A velodrome, dear inquisitive reader, is a track on which to ride a bicycle very fast in a circle. It’s the venue for an Olympic sport called track cycling. It’s Nascar for people who eat Kashi.

There are only 28 in the whole country. The one in Erie, just a ten-minute bike ride from downtown, looks, as they all do, like a giant salsa dipping platter, or a giant upside down cowboy hat, or a high-school physics student’s final project.

Take a tour; everyone else in Boulder County is. John Goltl, 76, of Broomfield, a mutton-chopped farmer in a hat with earflaps, isn’t a bike racer, but has been curious about the velodrome since it went up. So, on a recent day, he visits. From the parking lot, Goltl walks through the tunnel that runs under the track. He comes to a 5,000 square foot storage facility and rental shop, with 250 hooks for riders to store their bikes.

Then Goltl steps up stairs into blue light and gapes.

A visitor is struck, first, by the size — it’s huge. And by the quality — very, very classy. And, finally, by the steepness of the banked walls; 41 degrees at their steepest. But they do not appear 41 degrees. They appear so steep that, in order to stay attached, one would have to have the grip of Alex Honnold or possibly Spiderman.

Goltl arrives during “structured training” with some serious racers. Goltl watches the cyclers whir and whiz around the track, drafting off one another, like a flock of birds, just as colorful and nearly as flighted.

This is, for sure, a place for elite athletes. There are big hopes to establish the track as one of the centers of Olympic training. They’ve already had national champions training here, and the Dutch national team is scheduled to train here soon. Just as ski jumpers often claim their hometown as Steamboat Springs, the hope is that, by 2020, there will be an Olympic track cycling medalist with an Erie address.

Goltl, for his part, is just a regular guy. He doesn’t plan to try track cycling — he thinks his bike skills are too rusty. 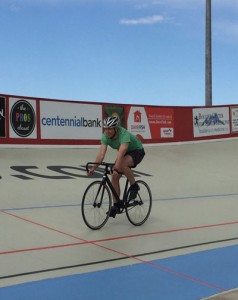 But Doug Emerson of University Bicycles, and one of the track’s owners, insists anyone can hack it if they try. With a little centrifugal force, the walls feel perfectly banked. Though Goltl is 76, Doug says there are riders on this track who are 80. And riders who are 11. Emerson claims a “1,000 percent success rate” at teaching new riders how to ride the track.

Which is what he wants. It’s not enough, Doug says, to attract those spandex humans who sleep in cleats and eat Gu for Thanksgiving dinner. “If this is going to work, we’re going to have to get Erie to embrace it,” says Doug. It needs Dacono school kids and Louisville grandparents, Lafayette divorcees and Longmont retirees, the bicycle equivalent of a yoga class or an Apple computer: beloved and used by experts and novices alike.

“If we get people to come in here and they look at what we have,” says Frank Banta, who built the track, “they’re hooked.”

And it seems true. The velodrome riders, to a person, rave.

“There’s no stop signs no stop lights nothing,” says Chet Henry, 30, of Longmont. “It’s so much more intense than road biking.”

“This helped me rekindle my love of cycling,” says Erin Witter, 46, of Arvada.

In the spirit of attracting new riders, the tracks management tries to be as open as a polyamorous marriage. There is women-only racing on Mondays. Admission to the Thursday night races is free. In July, the Colorado Music Festival is hosting a concert here, musicians playing while riders race around the track. Corporations do parties here. The assistant track manager, Chris Ferris, plans to marry his fiancé, Jenifer, here this summer.

It’s soothing to a visitor, watching the racers roll around the track endlessly, like a bicycle Mobius strip.

“It’s an accidental Zen experience,” says Doug. “Whatever you’re worried about, when you step onto the track, that all falls away.”

Zen in Boulder? Who’d’a thunk it?

So a visitor can say that, yes, a velodrome does make the Boulder County bike scene feel more complete. It feels natural, like dogsleds races in Alaska or spearfishing in Indonesia.

How did we ever not have a velodrome?

As Doug says: “It’s like we built the first hockey rink in Quebec.”