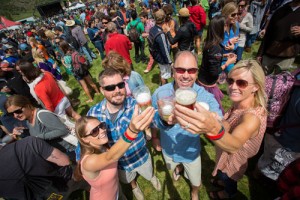 Memorial Day is typically the official start of summer, but truly, summer begins with the Burning Can Beer Festival June 4 in Lyons. More than 150 craft beers in cans — the now ubiquitous packaging pioneered by Dale Katechis of Oskar Blues Brewery — crazy sporting events, food, music and the second running of the Beer Relay. While it sounds simple enough, running a 5K race after drinking a 12-ounce Oskar Blues beer (which knocks 2 minutes off your time) could involve serious peril and if it’s a Ten Fidy, you’re toast. Burning Can tickets are $45 ($65 for VIP) and that gets you unlimited 4-ounce tastings and music by the Dirty Dozen Brass Band. For info and tickets, go to burningcan.com.

Get your cider on

More akin to wine in how it’s made, cider used to be the drink of choice among the early conquerors of the New World. In fact, the screw from a cider press was used to shore up a beam on the Mayflower that broke during a storm on its way to America. Yes, they were bringing apple tree seedlings and the gear to make cider to the New World. Enjoying its own resurgence, cider has been growing in popularity nationwide and Colorado is no exception. The inaugural Pressed Conference, May 28 from 2-5 p.m. at the Highlands Masonic Event Center in Denver, will feature eight Colorado cideries — including Firestone’s own Wild Cider — as well as others from around the state and Rocky Mountain west. Tickets are $40 and include a commemorative glass and unlimited tastings. For info and tickets, check out ThePressedConference.com .

Among the best values around, as beer festivals go, is the Snowmass Rendezvous Craft Beer Festival June 11 on Fanny Hill. The $30 admission gets you into the grand tasting from 2-5 p.m. where more than 50 craft breweries will be serving up unlimited samples. Brewers throwing down include hometown favorites like Upslope, 4 Noses, Odd13, FATE, Left Hand, Sanitas and Boulder Beer. A free concert follows with the Royal Southern Brotherhood with Cyril Neville. And if you want to stoke your metabolism and put in a delicious food foundation before you tackle all those craft brews, sign up for the bRUNch Snowmass 5K or 10K trail run. The $40 registration (proceeds from which benefit the Colorado Brewers Guild) gets you a timed trail run, brunch buffet at Venga Venga and two drink tickets. For info and tickets, check out gosnowmass.com .

Go to the source with your local CSA

Community Supported Agriculture programs (CSAs) are a great way for apartment dwellers or those with no yard (or time) to enjoy fresh, locally grown produce, flowers, meat, eggs and milk (depending on the farm). Subscriptions (or shares) can be purchased for a lump sum for the season or by the week. Prices can even include delivery! The Farmshares.info website has one of the most complete listings for Boulder County CSA farms and even has a free email primer for those new to the program. If you’re interested, get on this quick; shares sell out fast.