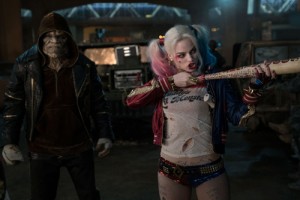 The summer’s viewing options include the usual action blockbusters, a range of animated offerings and plenty of small-screen binges.

Sock it to Me Movies!

Not a lot of big words needed for so many action-packed films.

When the Hulk is not big enough for you, enter the mythical world of Warcraft (6/10) for a video game come to life. If Las Vegas magicians is more your style, or you just want to see Jesse Eisenberg disappear, Now You See Me 2 opens the same day.

Remakes and sequels pop up all summer long.  Independence Day: Resurgence (6/24) comes early when aliens return to take over earth. Star Trek Beyond (7/27) heads deeper into space with a new enemy threatening the Universe (as long as it’s not Khan). The Legend of Tarzan (7/1) – naked man = yes, please. The Purge: Election Year (7/1) Just… Kill… Them… All. Ghostbusters (7/15) Dan Ackroyd loved it so suck it, haters!

Keep it chill for the kiddos with new animated flicks, opening almost weekly. “Fish are friends, not food,” in the long awaited Finding Dory (6/17). It’s Pixar with a splash of Disney through and through. Steven Spielberg’s The BFG (7/1) is all Disney with a heartwarming tale of a big, friendly giant who’d rather make friends with the local kids than eat them.

Rock out after the Fourth of July with Secret Life of Pets (7/8) and see what your furry friends do once you leave the house. It features the voice talents of popular comedians Kevin Hart, C.K. Louis, Jenny Slate and Hannibal Buress. The animal shenanigans continue with Ice Age: Collision Course (7/22).

Fantasy takes hold in August with a live-action/cgi remake of Pete’s Dragon (8/12) that looks promising. Do not, I repeat, do NOT take the wee ones to Sausage Party (8/12). It’s R-Rated and we all know what those hot dogs and buns stand for. Autumn finds a few low-end animated movies like The Wild Life (9/9), and Storks (9/23), but hold out for the full cinema experience of Miss Peregrine’s Home for Peculiar Children (9/30). Middle school students loved the book and the visuals look stunning.

Oh god yes! Monday just became the best night for Mean Girl TV with Season 2 of UnREAL sharing the same night as The Bachelorette. Lifetime’s biting UnREAL reveals the underbelly of a fictional reality TV dating show, while The Bachelorette is one of the shows it spoofs. Please let Chad still be on! If once a week isn’t enough, catch up on season one of UnREAL, and check out the most shocking moments of The Bachelor and The Bachelorette on Hulu. Start with Season 14 of The Bachelor: On the Wings of Love, when one of the contestants cozied up to a producer. Serve them all up with some dirty martinis so you, too, can feel unclean the next day.

For a shorter commitment, stream Another Period. It stars comics Natasha Leggero and Riki Lindhome as Lillian and Beatrice, a couple of rich, tacky heiresses being rude and lewd during the Edwardian era. So basically they’re Kardashians. Season 2 starts June 15 on Comedy Central but Season 1 is everywhere (just like Lillian and Bea).

Once you sober up, head to the theater and watch Zac Efron (topless as always) and Adam DeVine (loud as always) playing bad boys who accidentally snag two even nastier girls (Anna Kendrick and Aubrey Plaza) in Mike and Dave Need Wedding Dates (7/8).

Before The People v. O.J. Simpson: American Crime Story, Catfish: The TV Show, and a slew of true crime podcasts, there was these things called documentaries. Doc…u…mentaries. They were considered boring and the purview of film geeks back when being geeky was not a thing. You usually watched them in film studies classes, art houses, on video, or listened to them on the radio if you were really, really old. You had to work to find good documentaries in the 20th Century.

Then Millennials showed up and started making podcasts and videos and the most remarkable thing happened: documentaries became interesting and easy to find. Tickled wins for oddest, following a New Zealand journalist investigation of the hidden culture of competitive tickling videos. He receives some serious online and in-person backlash when he suggests the sport might have anything to do with sex or money. It comes out of the Internet shadows and into suburban theaters June 17th, but could take a while to make it to your part of town. (HBO picked up the TV rights, so it will eventually come to cable.)

Gurukulum supports a much higher cause with a meditation on ashram life and self-identity (Boedecker Theater 7/22 – 25). He Named Me Malala, about young Pakistani activist and Nobel Peace Prize laureate Malala Yousafzai, swept through film festivals late last year and is now available to everyone on Netflix and Amazon. Keep an eye on local theaters for Author: The JT Leroy Story. She’s the original catfish who tricked the literary world but, like infamy, the movie won’t last in theaters for long.

Serial, the award winning podcast that pulled in all the attention last year, is not the only source of real audio adventures. The Moth spans a variety of platforms from live theater, to radio, videos and podcasts. The group emphasizes the art of first person storytelling, and is a great start for people new to online audio drama. Love+Radio is easy to find on loveandradio.com. The interview heavy program is similar to NPR’s This American Life and encourages listeners to slip on their big headphones for the full podcast experience.

View all posts by M.B. Abbott →