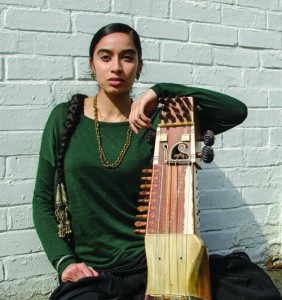 The Jaipur Literature Festival in Boulder brings together distinguished contemporary authors from across the globe to share in a celebration of culture, art, music and the written word. We caught up with Punjabi folk, jazz and soul artist Amrit Kaur Lohia for a quick chat.

Yellow Scene: Has the current political climate affected the reception of your music in the U.S.?

Amrit Kaur Lohia: I have always described my music as ‘music beyond borders,’ never limiting it to a particular audience or demarcating musical boundaries for myself when creating music. At the heart of the poetry, the traditions and the genres of music I perform, there is a  determination to revive traditions, to encourage  community cohesion and  empower audiences through shared experience. Considering the divisive politics in the U.S., the racism, the lack of exposure to culture and traditions around the world, there is clearly a demand for more music and education from around the world. My passion for music and culture has so far had a positive reception in the U.S. and it has been recognized as a contribution to the phenomenal work that is already being done in the U.S. by artists and educators. We can always rely on the arts to see an alternative propaganda that promotes love and community that transcends borders and boundaries.

YS: How has the political climate affected your writing?

AKL: Divisive politics in the U.S. and in the UK, where I’m from, has ignited the youth in a way I have never experienced before. This has created a climate of sensitivity towards many aspects in society which were ignored, and the youth have been a significant driving force in this movement.My work seeks to reflect the culture, diversity and political consciousness that the youth have. The youth are impacted by politics the most, yet we are not even heard. I want my voice and music not to be just heard but listened to. Through my art, I feel empowered to empower.

YS: What are the most important things you want people to get out of your music?

AKL: I explore music beyond borders through my voice and music  as a way to inspire curiosity among audiences, to encourage exploration of new places, there history and culture and through this, humanize universal experiences across generations to bring people together in such dangerous and divisive climates. 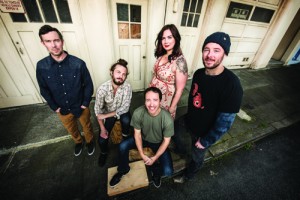 Yellow Scene: You’ve come a long way since 1998. How would you say you’ve evolved?

Adam Aijala: I feel like our music is constantly evolving simply because we’ve never had a template or specific direction when it comes to songwriting. We just write songs and if they work within the context of Yonder, then we’ll probably start playing them live… I think that’s what keeps things fresh for us. That and having a new lineup. Having played with Allie (Kral — violin, vocals) and Jake (Joliff — mandolin, vocals) for over two years now, I feel much more comfortable and can have a lot of fun especially onstage. We are lucky as hell to have been playing music in this band for over 18 years.

YS: What about playing in Colorado? How has the music scene evolved?

AA: The music scene has evolved especially in the acoustic type genres. At the time of our inception there was virtually no other band playing plugged-in, loud bluegrass without a drummer. Yes, there was Leftover Salmon and String Cheese Incident — who both helped carve a path for us — but they were and still are, full-on rock bands with a good bit of bluegrass flavor. Love those guys. Now, there are a bunch of bands not only in Colorado but nationwide that are plugged-in acoustic bands without a drummer. It’s great to see the scene thriving.

YS: When’s the next album coming out and why should we be excited for it?

AA: We’re working on a new album now and hoping to have it out in the first quarter of 2017. I feel like it’s a continuation of our last album, Black Sheep (Frog Pad Records, 2015), in regards to the instrument tones and the microphones we used, yet it’s a bit more eclectic in that we explore more styles of music. There’s a reggae song on it, for example. So far, I’m really happy with what we’ve got going and I’m looking forward to piecing the rest of the album together. If you liked Black Sheep then I think you will dig this new one.

moe. at the Boulder Theater

A million or so miles traveled and more than 25 years on the road — give or take — means moe. has had the time to carve out a space for themselves where their rock roots intersect firmly with a jam band approach. And that’s all the up to and including No Guts, No Glory (Sugar Hill, 2014) their most recent outing, with hip hop producer Dave Aaron (Snoop Dogg, Tupac Shakur, Dr. Dre). Their staying power indicates more than just a sound that appeals to nostalgia for the early-’90s, and it’s why you should spend the extra dough for the special 2-day ticket as they share a bill with Gov’t Mule on Aug. 25, then play a special appearance at the Boulder Theater on Aug. 26 for $72.45. Head to bouldertheater.com for more information.

Too Many Zooz at the Fox Theatre

Two-and-a-half years after their first YouTube videos went exceedingly viral, New York City buskers and Too Many Zooz has found a far-reaching audience, thanks to their rags-to-riches overnight success story and their irrepressible brasshouse swagger. The band has a dozen digital albums available for download, and pretty much everyone knows them as “you mean that dancing baritone sax guy and the trumpet dude who plays in the subways in New York?” Not bad for a trio of friends (Leo P on sax, trumpeter Matt Doe and drummer David “King of Sludge” Parks) who met at the Manhattan School of Music and started playing in Union Square to pay rent. Catch them on Aug. 26 at 8:30 p.m. at the Fox Theatre for $15; foxtheatre.com

You might know Garfunkel & Oates from any number of different outlets — Kate Micucci had a hilarious recurring role on Raising Hope and her singing partner Riki Lindhome was Fozzy Bear’s girlfriend on the recent The Muppets. reboot. Together, the duo created the funniest folk-styled singer/songwriter act this side of Steve Martin’s solo work. Songs like “The Loophole” about how a Christian girl can still be a virgin after enjoying anal, or another one called “Pregnant Girls Are Smug” round out an uproarious catalog. Think Phoebe from Friends, but as a duet and more R-rated. Leave the kids at home and head to the Paramount Theatre on Aug. 27 at 8 p.m. Tickets are $42.50, paramountdenver.com

Originally a home-grown Chicago music showcase born in 2005, Riot Fest grew to a national footprint in 2012 and added Denver as a stop in 2013. And while we could spend a lot of time talking about its history, let’s just recap some of the reasons you need to make this your must-see show this month: The Original Misfits (Featuring Glenn Danzig, Jerry Only and Doyle Wolfgang Von Frankenstein), Ween, Death Cab For Cutie, Jane’s Addiction, Sleater-Kinney, NAS, Deftones, Fitz & The Tantrums, Descendents, NOFX, Bad Religion, Tyler, the Creator, The Hold Steady, Yo La Tengo, The Dandy Warhols, Suicidal Tendencies, Me First & The Gimme Gimmes, and the Meat Puppets, to name a few. Get your passes for the 3-day festival at riotfest.org.