If anyone was wondering why Sleater Kinney has landed on several “best band” lists, their energetic set Saturday night at Riot Fest in Denver answered that question loud and clear… and loud. The all-girl trio from Olympia, Wash. (with Corin Tucker, Carrie Brownstein and Janet Weiss) brought along Katie Harkin to round out the band’s sound with added keyboards, guitar and vocals. The women threw down hard for a crowd that was as psyched to see them as they were the headliners playing right afterwards on the stage next door. 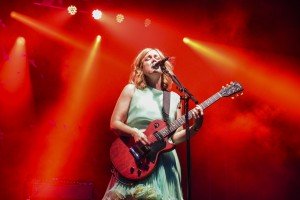 Corin Tucker of Sleater Kinney brings her “A” game to Riot Fest Saturday night in Denver.