Los Angeles-based punk harmonizers, Bad Religion, showed no signs of slowing down during their show Sunday at Riot Fest in Denver. Among the more successful punk bands, Bad Religion has toured almost consistently since forming in 1979. Many of their songs contain commentary against organized religion and politics. 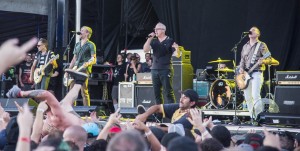