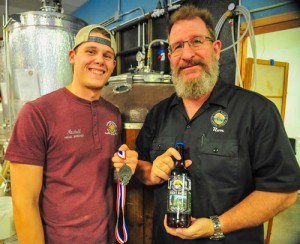 Tucked into a corner of Lafayette Marketplace, Front Range Brewing has been looking for some stability in its beers, its food and its people since opening their doors in June of 2013. With the addition of a small kitchen, buying out his co-owner and snagging a silver medal at this year’s Great American Beer Festival, owner Ron Hoglund feels like he’s ready to get growing.

“There is a lot of change we’re absorbing here,” Hoglund said. “I’m hoping to get to a stable state with this place and eventually open a second location.” Where that expansion could happen, Hoglund doesn’t say. But he does know that at the core of his brewing operation is his newly minted, full-time head brewer, Mitchell Nichols.

Nichols, a family friend who caught the brewing bug by hanging out at Hoglund’s garage and sampling his prolific home brewing output, came on board at Front Range after ownership of the brewery was consolidated last April. Barely old enough to drink legally (he’s only 23), Hoglund says his young apprentice quickly picked up the art of craft brewing and is fast leaving his mark on the beers. “We changed a lot of the recipes since April,” Hoglund said. “And Michell is a phenomenal brewer.”

He points to the GABF silver medal-winning Piney Ridge Dunkel as an example of Nichols’ ability; it is, after all, his recipe. The German lager — somewhat of a rarity among small craft brewers because of how long they take to brew and the tight temperature requirements — has almost no malt or hops in the nose, possesses a smooth, nutty-sweet, full-bodied palate and a mild, clean finish. It’s not like a lot of ales where you can hide slight imperfections behind a wall of hop flavor or bitterness, or the fruitiness of the yeast. With the crisp, clean nature of lager beers, the quality (or lack thereof) is out there for all to taste. “It took three runs until we got it where we wanted it,” Nichols said. “The flavors — a toffee and toast profile — are just where we want.”

And that attention to quality and variety is similarly reflected in the nearly two dozen other beers that get rotated into the 10 tap handles at Front Range. In addition to several “core” brews — IPAs, Imperial IPAs, porters, stouts, weissbiers, pale ales, Vienna lagers, red ales and a fantastic quadrupel — Nichols has some seasonals that are worth checking out, including three different, small-batch pumpkin beers: a pumpkin amber lager, pumpkin latte (based on the delicious coffee stout) and pumpkin Scottish.

Nichols’ brewing ability can be tasted in all the beers on tap at Front Range, but now that this little brew pub — which will only put out about 230 barrels of beer this year — has caught the eye of distributors, restaurants and patrons with its GABF medal, Hoglund says it will soon be time to expand.

“We would like to go to a 15-barrel system with six fermenters and ramp up to about 1,500 barrels a year,” Hoglund said. And despite having an ace brewer to handle daily brewing duties, Hoglund said he won’t be quitting his day job in the telecom industry just yet. But given the quality and consistency of Front Range’s beer, it may not be too long before the brewing pays for itself.