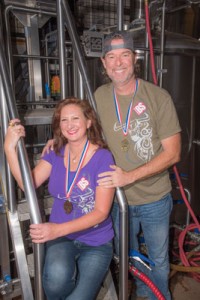 Leslie and Steve Kaczeus take a break in their Niwot brewery to enjoy the fame and good fortune that gold and bronze GABF medals bring.

When a homebrewer cracks her first bottle of delicious, homemade beer, the elation and sense of accomplishment can be quickly followed by dreams of going big. What if those plastic fermenting tubs were replaced with gleaming stainless steel tanks; the siphon hose with pumps and pipes; the hand-washed brown glass bomber bottles with colorful cans sporting distinctive designs? What if this hobby could be turned into a career as satisfying and successful as that of, say, a high tech mechanical engineer or marketing director?

It was exactly such a dream that prompted Steve (aka “Stick”) and Leslie Kaczeus to trade in successful engineering and marketing careers, respectively, for the long hours, heavy lifting and sleepless nights involved with starting Bootstrap Brewing.

That was a little more than four years ago. In the 52 months since, the husband and wife team have watched their dream grow and prosper and — with the winning of a gold and bronze medal for Stick’s Pale Ale and Wreak Havoc Imperial Red Ale, respectively, at this year’s Great American Beer Festival — explode like a flash pot at a Who concert.

“On a personal level, it’s a dream come true,” said Steve Kaczeus, sitting with his wife, Leslie, among the fermenters and brite tanks that they have shoe-horned into their back alley, Niwot taproom. As he talks, the freshly minted, ear-splitting grin that comes with a first-time GABF gold medal never leaves his face; or his wife’s.

“It’s amazing to go from being a home brewer to owning your own brewery, and now to get this kind of recognition from your peers,” he said, “it’s a great confirmation of how good your beer is.”

With 157 entries, the American Pale Ale style is the fifth largest of the GABF’s 96 categories for medals.

This year’s medals aren’t the first wad of beer bling Bootstrap’s beers have hauled in. Wreak Havoc won silver at last year’s GABF and a bronze at this year’s World Beer Cup, an international version of the Great American Beer Festival also put on by the Brewer’s Association every two years, without the public tastings.

Given the accolades, it’s no surprise that Bootstrap is gearing up to grow. In fact, the Kaczeus’ had already inked a deal with Oskar Blues owner Dale Katechis to take over 14,000 square feet in the old Times-Call newspaper building at 350 Terry Street in Longmont. In addition to housing a larger brewing operation, there will also be a taproom.

“We already had a plan to grow,” Leslie Kaczeus said. “Winning the gold was the frosting on the cake and it’s just helping accelerate that plan. After winning the gold, we were getting calls from liquor stores and restaurants the next day: ‘Where can we get your beer?’ “

As for how that will happen, Leslie and Steve are still self-funding their brewery — truly a bootstrapped operation  and they will be hiring additional — staff to handle the increased production at the new Longmont facility, set to open year. They have also signed on with Coors Distributing Co. of Golden, which will give Bootstrap beer better market penetration within Colorado and ease the pressure that comes with hauling product to your accounts with just one driver and a van.

Don’t look for the Kaczeus’ to grow their baby too big or too fast. They are looking to grow incrementally by taking measured steps that have been in the works for several months. But where, exactly, that will land them in the months and years to come is anyone’s guess. One thing is certain, however: the soundtrack of their success will include a heavy dose of rock and roll.

“We’ll keep doing this as long as it makes sense,” Leslie said. “As long as it’s fun, we’ll keep going.”

Several veteran Boulder County brewers were uncharacteristically missing from the winners’ circle at this year’s Great American Beer Festival, but a handful of young craft brewers stepped in to fill the void.

Lefthand Brewing of Longmont again entered its Export Stout style-defining Fade to Black, Volume 1 beer, but came away with silver. It had earned three gold medals in three previous entries over more than 14 years; an unheard-of feat that signifies true mastery in a category. And a silver medal still indicates style domination.

Other medal winners include: