Behind the Bar: Looking ahead to a dressier Oktober 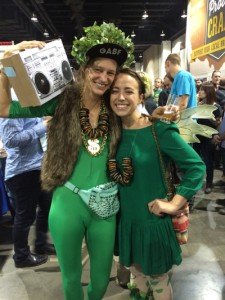 Fantastic costumes at this year’s Great American Beer Festival, Oct.6-8, could net two lucky people (and their crew) an early entry to the festival and exclusive tastings with celebrity brewers.

GABF is even more better this year

If you’ve ever blown off dressing up for the Great American Beer Festival because you didn’t want face paint on your teeth or your wig ended up itching all night, think again. New for the 35th annual GABF, Oct. 6-8, is the “Golden Ticket.”

Two lucky people (and their posse, if they’re a package deal) waiting to enter Hall A will be plucked from the line for a private tasting tour 30 minutes before doors open. Two celebrity brewers will make the choices during each evening session based on their own criteria. That could mean those showing good old GABF spirit, sporting brewery apparel or, yes, costumes to die for (herds of Waldos are so passe).

Celebrity brewers who will pick winners include Vinnie Cilurzo of Russian River, Sam Calagione of Dogfish Head, Matt Brynildson of Firestone Walker, Garrett Oliver of Brooklyn Brewery and Tomme Arthur of The Lost Abbey and Port Brewing. So get your dead ferret wig and Cheeto-colored face paint ready; there’s finally a reason to dress up for the GABF.

And by the way, GABF tickets went on sale Aug. 3 and sold out in about an hour. More than 800 breweries will haul in more than 3,800 beers for the 60,000 attendees filling the Colorado Convention Center.

The annual cover band competition and day-long festival held in Longmont’s Roosevelt Park put on by Left Hand Brewing found three bone marrow matches and raised more than $131,000 for the Leukemia and Lymphoma Society and the Left Hand Brewing Foundation (an 80/20 split).

This year’s winners of the battle of the bands were: 3rd: 40oz. to Freedom/Sublime; 2nd: Van Wholen/Who and Van Halen; and 1st: Mr. KnowItAll/Primus. Both Van Wholen and Mr. KnowItAll are based in Denver, so congrats to our local guys.

Yes, it’s August, but Oktoberfest beers are hitting the shelves. Dry Dock Brewing has released its Docktoberfest and Fort Collins Brewery released its 2015 GABF gold medal Oktoberfest both in cans and Left Hand has been pouring its outstanding Oktoberfest since the first of the month. Left Hand’s version is available in bottles at the taproom and all are available in area liquor stores until it runs out. These perfectly balanced, malty marzens are excellent examples of this lager style. And keep an eye out for Wibby Brewing’s version of this fall seasonal classic, Wibtoberfest, in the weeks ahead.

New Belgium Brewing is donating $4.3 million to Colorado State University’s new stadium project and will get to name the north end zone hospitality area at the stadium. The Fort Collins maker of Fat Tire Ale counts past and present CEOs Kim Jordan and Christine Perich as CSU alums, hence the generous gifts to the university. Last year, Jordan donated $1 million to school for upgrading the buildings and equipment used by the Fermentation Science and Technology program.