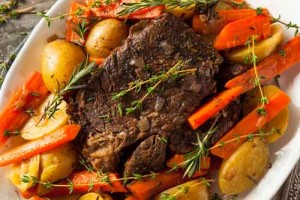 Pot Roasts keep their flavor and cook faster in a pressure cooker.

Do you have fond memories of your mother or grandmother loading a pressure cooker to make homemade soups, stews or even for canning? The unmistakable spit and whistle of an old-school pressure cooker can transport a person back to childhood days when mom could create the perfect hot soup to combat a cold day. Of course, there were always lots of safety warnings that came with the use of a pressure cooker.

The first pressure cookers date back to 1679 when French physicist Denis Papin invented the steam digester to help cook his food a bit faster. It wasn’t until 1938 that the Flex-Seal Speed Cooker, made for home use, popularized the fancy new appliance. The basic premise of a pressure cooker involves capturing all the steam from food or liquids inside. That trapped steam raises the internal pressure in the pot, which helps cook food faster while maintaining the flavor. Most foods that can be steamed or cooked in liquid will cook faster inside, and it’s a great way to get a braised flavor without hours and hours of slow roasting.

New pressure cooker designs have popped up in stores, recipes are making the rounds in cooking magazines and grocery stores now feature sections for instant-cook meals. Programmable pressure cookers, like the uber-popular Instant Pot, are much safer and faster than its old-school counterpart. It’s what Crock-Pot did for slow cookers. Opening a pressure cooker early releases pressurized steam sure to burn on contact. These modern cookers promises 10 levels of safety mechanisms built into the pot, including a lid lock, high temperature warning and excess pressure protection.

So what can you make with a programmable pressure cooker like the Instant Pot? Just about everything. Soups, stews, broths and stock are always a great staple. Beyond the basics there are recipes for everything from homemade dog food to rice dishes, meat dishes and even pasta.

Here are two easy examples of the kinds of meals you can prepare with a pressure cooker. If you already have one, these are still a great introduction into the range of cooking beyond the basics.

If you’ve ever made a traditional oven roast, you’re used to the three to five hours it takes to get that great slow-roasted flavor. This version does it in half the time with just as much punch as the slow-roasted variation. Add any veggies you like and prepare to impress your family. Adapted from the Umami Pressure Cooker Pot Roast recipe at instantpot.com.

How about dessert? A warm rice pudding is a great option for a cold winter night and your Instant Pot or pressure cooker can whip up an amazing rice pudding before you know it. This version is slightly adapted from the Creamy Rice Pudding recipe found at PressureCookingToday.com 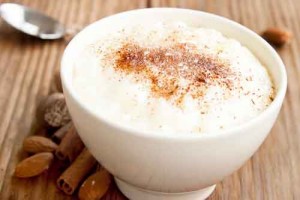