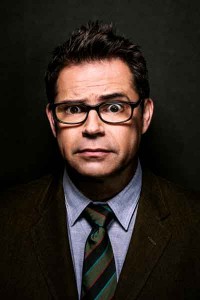 You may not know the name Dana Gould, but you definitely know his work. The comedian has been writing and performing since 1986, but may be best known for his work as a writer on The Simpsons for seven years. Gould also went on to write for Parks and Recreation and his newest series, Stan Against Evil. You may have also seen him on shows like The Ben Stiller Show and you’ve heard his voice over work on The Simpsons and Family Guy. He’s back on the road, headed to Boulder for a show at the Dairy Center for the Arts and we chatted with him about his career, what’s next and even a little glimpse into the future.

YS: What was writing for seven seasons on The Simpsons like?

Dana Gould: It was quite the change for me. I come from theater. I didn’t come to California to be a writer, I was doing stand-up. I sort of fell into the job, which I know drives a lot of people crazy. I was doing stand-up and George Meyers, who was a writer on The Simpsons and a friend of mine, liked my stuff and asked me if I would like to come in one day a week and help out with jokes. No pressure. I said, “Yeah that would be the greatest job on earth.” It was very intimidating, obviously… The Simpsons writing staff – it’s like writing for the Beatles. It took me about six weeks before I even opened my mouth, but I guess I did for 4 or 6 months, one day a week. Then the show runner came to me and said, “You know your contract is up.” I literally started collecting my stuff, and said, “Sorry.” And he said, “Do you just want to come every day?” I said, “Sure!” and he replied with, “Alright, sucker,” and walked out of the room and that was it.

YS: I have to wonder, were you there in 2000 when they predicted a Trump Presidency?

DG: I started in 2000, so I might have been there that day, or just after. But, we also predicted a Schwarzenegger presidency, so we just have to see.

YS: Absolutely. So, if you were looking into your crystal ball, what do you think the country will look like in four years?

DG: I think he has the ability to turn this country into what it once was — a wasteland ruled by giant lizards.

YS: Tell me about how your career changed after The Simpsons era.

DG: I was on the road with my peers, David Cross, Bob Odenkirk, Janeane Garofalo and Patton Oswalt. We worked together and did shows together and I sort of took the side track and went into writing. I worked on The Simpsons for seven years and assumed I had figured it out. I had two kids, was married, was an adult, but I felt I wanted to try other things. I didn’t want to just sit in that room and collect checks the rest of my life. So, I left the show and invigorated my stand-up career and tried to double-track my career where I would write on television but I would also go out and perform doing stand-up because it’s a thing I have do and if I don’t do it, I go crazy. I also think of myself as a pretty skilled writer and its lifestyle — I get to be home, I get to see my children. So I worked on Parks and Recreation and continued to do stand-up. Then I did a stand-up special in 2009, I think, called Let Me Put my Thoughts in You. ABC liked it and wanted me to develop a series for myself based on that. Everything came into fruition this year with a pilot on IFC called Stan Against Evil, starring John McGinley and it’s going into its second season soon. I do stand-up, I’m filming my next special in January and I have my podcast. 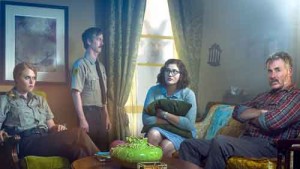 Gould’s new show, Stan Against Evil, airs on IFC. It’s been renewed for a second season.

YS: I’ve been listening to the podcast and would love to know how the Dana Gould Hour came to life.

DG: It was right after I left The Simpsons and I was really kind of lost. I was looking for something to re-assert myself. I was pretty hot stuff and then walked away and was trying to re-establish myself. At that time everybody had a podcast, my mailman had a podcast, and I wanted to do something unique. I waited awhile till I found what I wanted to do. I had this idea for a show based on NPR in LA called Joe Franks, In the Dark. This guy was still around and he would tell these interesting stories in a monotone voice. It started off really simple and would get more and more bizarre. It was a really slow burn in 5-minute sections and then we added music. I thought it would be interesting to do it in conversation, recording a conversation, break it up into bits and re-arranging it. Then put music underneath. When I experimented, I found it better to record the conversation then intersperse them, so it’s like an audit of two different conversations in a party. Then I put in journalistic things in the middle, whatever I’m interested, in, then filled it with all these old jingles, so it’s basically something I would like to listen to.

YS: Does it take as much work as it sounds like?

DG: Yes, it does. It takes days and days and days. That’s why I only do one a month. The Halloween episode had close to 100,000 downloads and that makes me happy.

YS: For someone who has been in comedy as long as you have, and has touched really every genre of comedy in some way, what is next? What do you dream about? What are you hoping for?

DG: I am getting ready to write the second season of my TV show. Then I go down to Atlanta and shoot that in the summer which will air on IFC next fall. I don’t think it’s official yet but the official announcement will be pretty soon, and I’m developing another television series I’m hopeful will come about. Right now it’s working really well. It took a good seven years to get here starting from 2010. I was trying to figure out something to do. It’s taken me to now to finally work.

YS: I don’t know if you are familiar with the comedy scene in Colorado, but we have a few names coming out of Colorado that have made it pretty big. Are there are any up-and-comers that you are watching or anyone you enjoy listening to?

DG: I really like The Grawlix — the guys with that show, Those Who Can’t. I am friends with them; Denver’s Comedy scene at the Comedy Works has been one of my favorites. I was performing at the Comedy Works as a child — I worked the first night the Gulf War started in Denver. Denver has been a great place. I don’t think I have ever been to Boulder though, and I’m pretty excited about it.