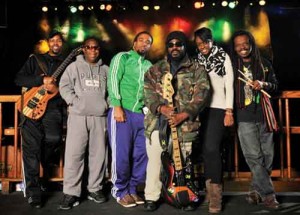 From concerts and comedians to a live murder mystery for teens starring video game characters.

The inaugural event last year was so popular, the City of Longmont not only committed to a second year — they doubled up the fun with two shows on Dec. 17 at the Stewart Auditorium in the Longmont Museum and Cultural Center (400 Quail Road). The matinee starts at 3 p.m., the evening show starts at 6:30 p.m. Both shows kick off with an hour-long reception with Santa, followed by performances by the Boulder Ballet, Peruvian guitarist Manuel Molina, the Boulder Klezmer Consort, the Heath Walton Jazz Quintet and more. For more information and to buy tickets, head to longmontcolorado.org

FACEMAN AT THE BLUEBIRD THEATER

If you missed the 100-Year Storm — the 2-day, 100-band tornado that hit the Oriental Theatre in Denver last month — all is not lost. The brain behind the bash, FaceMan, returns to the stage at the Bluebird Theater on Dec. 23 at 8 p.m., opening for the Rebirth Brass Band, a beloved Second Line outfit from New Orleans. FaceMan — Steve, David Thomas Bailey and Dean Hirschfeld — are adding a bunch of horns to the mix, bringing their country-tinged, jazz-influenced indie rock sound in support of the release of their fourth studio album, Wild and Hunting. Tickets start at $19; bluebirdtheater.net

Settling in for a 2-night stand at the Boulder Theater, the Yonder Mountain String Band hopes your New Year’s Eve plans just might revolve around the quintet’s blend of Nederland-flavored prog-grass. Honed across the span of 16 years and thousands of live shows across the globe, YMSB built its following on clever songwriting, DIY grinding and encouraging the bootleg recording subculture that permeates its fan base. Tickets start at $35, 2-day passes start at $90; www.bouldertheater.com for more information.

RFK at Dairy Center For The Arts

Vintage Theatre first presented RFK featuring James O’Hagan-Murphy in 2013, directed by popular local director and playwright, Terry Dodd. The show was met with rave reviews and multiple revivals over the past few years, as audiences have clamored to see this important play. Unfortunately, Dodd recently passed away, but his original vision and production is receiving another revival, this time at the Dairy Center for the Arts in Boulder. This moving, poignant and historic work about the life and tragic loss of the most enigmatic of the Kennedys plays Jan. 6–8. Tickets are $20 in advance online. 2590 Walnut Street, Boulder 303.440.7826 thedairy.org

Longmont Theatre is bringing another hilarious comedy to its beautiful stage with Leading Ladies by beloved farcical writer Ken Ludwig. In this production, two English Shakespearean actors find themselves in Pennsylvania. They learn an elderly woman is nearing death and she’s looking to leave her massive fortune to her long-lost English nephews. Or possibly nieces? The actors will have to find out. Catch this classic comedic romp on stage from Jan. 13–22 at the Longmont Theatre. Tickets are $18. 513 Main Street, Longmont 303.772.5200, longmonttheatre.org

CLUE AT THE ERIE COMMUNITY LIBRARY

Few things are more fun than murder. At least, that’s the underlying sentiment when the Erie Community Library (400 Powers Street) morphs into the scene of the crime for a massive game of live-action Clue, filled with all your favorite video game characters. Teens aged 12–18 are encouraged to dress up as Mario, Pikachu or any of their other beloved game characters and come ready to solve this genre-bending whodunit on Jan. 20 at 6:30 p.m. Pre-registration is required. Call 814-451-6900 for more information

THE WAILERS AT THE FOX

There’s no arguing that Bob Marley and the Wailers not only singlehandedly evolved the reggae sound from niche tropical ska-child to worldwide acclaim, but delivered some of the most beautiful songs ever recorded in the process. And while it’s been more than 35 years since Marley passed, The Wailers — through a few different incarnations — have ensured that the spirit of what he preached continues to live on. Catch them on another turn through Boulder on Jan. 28 at 8:30 p.m. at The Fox Theatre. Tickets start at $25; foxtheatre.com for more information.