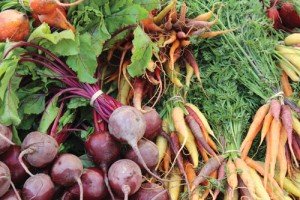 The time to sign up for a CSA, is now.

The arrival of the New Year also means it’s time to start planning ahead for the harvest of the spring and summer months. If you’ve considered joining a Community Supported Agriculture (CSA) organization, this is the time to start looking. CSAs are a great way to support your local farmers during the off-season, while you get to enjoy the fruits of their labor. CSA memberships often include enough organic vegetables, fruits and meats to serve your whole family for 23 weeks. There are a lot of local CSAs to look at, including 63rd Street Farm, Cure Organic Farm, Growing Gardens and more. Check out the CSA websites and take a look at what’s included in CSA memberships to find the plan that works best for you.

One of the oldest restaurants in Colorado closed its doors after more than 98 years in business. Louisville’s Blue Parrot Restaurant originally opened in 1919 and has been run by the same Colacci family for the entire 90-plus years it has been in operation. Serving traditional, old-school Italian food, The Blue Parrot was one of those red sauce joints that filled you up with the kind of food your grandmother might make, though the Louisville landmark had some difficulty over the past few years, despite a remodel in 2013. It sadly wasn’t enough to keep the lights on. Despite the closure, the Colacci family says they are working on getting some of their recipes into local grocery stores, so the Blue Parrot may not be extinct.

Denver’s longest continuously-running bar is also going through a big change. My Brother’s Bar, which has been in operation (under a variety of names) since 1873 changed hands again, as Denver entrepreneur Danny Newman and his father, David Newman have purchased the property from long-time owner Jim Karagas. Newman is no stranger to the Denver area and is also the name behind Denver’s Zombie Crawl, so he knows a thing or two about drumming up business. The history and character of the original bar are expected to be preserved, and the original watering hole that used to serve names like Neal Cassady and Jack Kerouac will still be an integral part of the Denver bar landscape.

Blooming Up all over

Massive congratulations to Blooming Beets, the popular Boulder restaurant serving up 100% gluten- and grain-free dishes. The Boulder restaurant has plenty of fans thanks to a plethora of locally pastured, grass-fed meats, no seed oils, no processed sugars and only the cleanest, most local foods possible. Now, Blooming Beets just opened a second location in Chandler, Arizona and a third location is headed to Denver soon.