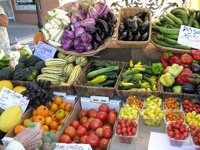 Have food news? Have a dish pick? Let our editors know where to look by sending us an email to editorial@yellowscene.com!

2020 Food + Wine Bar opened last month in Prospect at none other than 2020 Ionsophere St. in Longmont. After shifting around, the restaurant situation at the Hotel Boulderado is finally settled with Spruce, which opened on August 5. Alfalfa’s opened their second location in Louisville, complete with hot and cold food bars. Saving best for last, the Cinebarre Boulder opened on August 1 where the old Louisville Regal Colony Square Theater once lived. The cinema/eatery—which includes a fully stocked bar with 24 taps—provides paper and pencil for you to place your order after taking your seat in one of the leather chairs. After years of pizza recon from around the world, the good folks at Rosalee’s Pizzeria in Longmont will be opening for business by the end of the summer. Boulder’s farm-to-table Beehive has closed its doors, and a wine bar called PMG will be taking its place by mid-August.

With a smaller food menu and a more neighborly feel aimed at getting people to stay longer with fancy cocktails, The Bitter Bar in Boulder unveiled its new look that has been in the works all summer. PETA named Mustard’s Last Stand (located in Denver and Boulder) one of the top five places to get vegan hot dogs in the country. The owners of Salt, Colterra, Black Cat and Bramble and Hare in Boulder are on a quest to completely eliminate pesky GMOs from their restaurants. Purely Elizabeth, a new natural foods company, has relocated its headquarters to Boulder from NYC for reasons that seem to be quite clear. After a brief Listeria scare, peaches, plums and other pitted fruits have been deemed safe to enjoy in once again (while the summer prices last). Flagstaff House won Wine Spectator’s Grand Award for the 31st year in a row. Great job, guys.

The Boulder Dushanbe Teahouse hosted its 15th annual Rocky Mountain Tea Festival at the beginning of August with lectures and tea tastings. Frasca Food and Wine celebrated its 10th anniversary with a special menu offered from August 4-9. Arguably the best seven days of the year, National Farmers’ Market Week runs through August 9 with the Boulder County Farmers’ Market hosting events like “Yoga and Wine in the Gardens” and veggie-harvesting workshops. Want to learn how to cook like a Native American? Head over to Kachina Southwestern Grill in Westminster and Chef Bolton will teach you how. Bring $20 on August 21 at 6pm and get ready to learn while enjoying traditional dishes.