The Ballad of Mickey Wilson at the End of the World 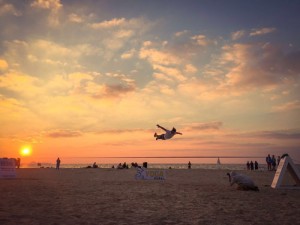 What’s the future of catastrophe? Who will survive the coming apocalypse sparked by a misspelled tweet? Which kind of person?

The Ballad of Mickey Wilson made me wonder. You know Mickey. He’s a long-haired ski brah. He was on “Ellen,” “ABC News” and in the Washington Post. Why? Because last month, at Arapahoe Basin, on a chairlift, a skier on the chair in front of Wilson had his backpack catch on the chair. It lassoed his neck; he swung around with the chair and dangled off it. Wilson watched him swing, as if from a noose.

I used to think that, after The End of the World, as caused by tiny hands mashing the red button, the gun-toting, beer-gutted, man-beasts would use the gauged earlobes of urban hipsters to string them over smoke racks for jerky, and live to rule the land from their duck blinds. Now I’m not so sure. These days, I look around at the climbing gyms I go to — Movement in Denver and Boulder, and The Spot and the Boulder Rock Club in Boulder — and see something more than what I, from the hard streets of North Aurora, would have thought: I thought they were just stoned, shoeless, jobless moochers avoiding homework and the regular use of deodorant. Instead, now I see fire: ponytailed ninjas leaping from hold to hold, tattooed Batmen hanging from overhangs as if they were in Mallory Cave, cowboys who have skills with rope…

At A-Basin, there on the chairlift, the guy lost consciousness. Wilson sprung into action. He scrambled to build a human pyramid to reach the skier that way. No luck. Wilson called to the liftie: could he run it in reverse? No, the liftie said. Panic set in; death seemed close…

Wilson, though, is not your average ski bum. Or — maybe he is. Maybe average ski bums are highly skilled. Wilson is a champion slackliner, which is like a tightrope walker meshed with Simone Biles. He won one of the nation’s premier slacklining competitions, the Red Bull Baylines, with flips and twists.

Wilson had a flash! Poles and wires aren’t obstacles to him, they’re highways. He climbed the tower, slid across the cable, dropped to the chair, caught a knife from a patrolman, and sliced the backpack strap, dropping the skier to the waiting patrol, who revived him.

He honed these skills, and others, at a gym in Thornton.

“Progresh has been one of the single most important things to happen to me,” he tells me. Wilson started as an instructor on the indoor ski ramp, then set up a slackline over the airbag and flipped his way profish [Proficient.] “Progresh is the best gym in Denver and not near enough people go there, because people are stuck in their ruts, doing the weightlifting or cardio. Those aren’t the skills that really matter. I mean, maybe you have to lift a car off somebody … but to be in touch with your body, that hand eye coordination is something else.”

Did Wilson know he was training to be a lifesaver?

“Not exactly,” he says. “It’s all just training to be the best human being we can be.”

Are we saying slacklining is guaranteed to save lives? No. Are we shamelessly insinuating that it is in order to write an interesting column? Maybe. Are we going to stop? Definitely not. In fact, we are going to take it even further.

Wilson is an expert whitewater kayaker. What lives could he save with that?

“During a flood, I would know how to rescue people from rivers,” he laughs.

He’s an expert skydiver. What about that?

“If I was in a plane that went down, if I had my gear, I could bail out and save myself,” he laughs. “Maybe hug someone and take ’em with me.”

“If you had to outrun a bear and you were at the top of a steep hill…” he says. Then he pauses. “Now I’m really reaching.”

Maybe. However, the Ballad of Mickey Wilson supports my hunch: that the slacker-looking slackliners and climbers at my climbing gyms stand as good a chance of thriving during the coming Trump-ageddon as some people more likely to have voted for Trump. This is no small thing. If the climbers, the ski bums, and the dirty hippies are not the meek, but those who shall inherit the Earth, then this whole America Thing ends up a lot different. Mickey, for example, earned a 4.0 from Mines. He knows computers. If he and his brothers learn to shoot guns, my money’s definitely on them.

“I already have a plan for,” he says. “It involves using my slacklining to make a permanent home somewhere no one else can find me.”

Up there, Wilson will be waiting. The slack shall inherit the earth.