Editor’s Pick: She Rode Horses Like the Stock Exchange 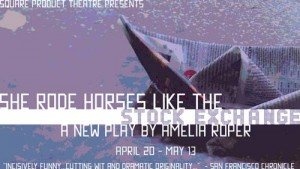 Boulder’s Square Product Theatre has been on the cutting edge of compelling, timely, fascinating works that have you thinking and questioning long after the lights have gone down and you’ve left the theater itself. Fresh off its most recent production, The Box Marked Black, which presented stories from bi-racial people who grew up in America comes She Rode Horses Like the Stock Exchange. Here, producing artistic director Emily K. Harrison talks about the new production, their approach to theater and what you can expect for this latest work in Square’s long line of compelling productions.Yellow Scene: Tell me about She Rode Horses Like the Stock Exchange. What is this play about?

Emily Harrison: In 2007 in a “nice” park, on a “nice” street, two “nice” New England couples try very, very hard to be “nice” to each other, as the crippling global financial crisis rides into town. Amelia Roper’s She Rode Horses Like the Stock Exchange is an absurdly funny, poignant and terrifying look at wealth in America, focusing on what happens when the patriarchal status quo is undermined by women who are more intelligent, more complex, more aggressive and better at what they do than the men in charge. The gender politics in the play serve to highlight the anguish that accompanies the fading American Dream.

YS: Is this play as timely as it seems, in regards to our current financial climate?

EH: The play is very timely in many respects, and may, in fact, be more timely given the outcome of the 2016 presidential election. Many experts believe that deregulation and “undisclosed conflicts of interest” played a significant role in the global financial crisis. Our current President seems to favor deregulation in many sectors, and his refusal to release his tax returns has led many to speculate about the breadth of his conflicts of interest. I also think the play is timely in terms of the real estate situation in this region. We’re in the midst of a housing crisis of a different sort than the 2007 subprime mortgage crisis, but there are striking parallels. While it was largely homeowners who suffered during the mortgage crisis, especially those in lower income brackets, the current housing crisis often negatively affects renters, especially in a region with soaring property values, high demand for housing, low supply of housing (especially affordable housing), and no rent control. In both worlds, people are losing their housing.

YS: Your mission states that you “engage in radical acts of inquiry that leave an audience with just as many questions as answers.” Talk more about that, what that means to you and how you use that to determine your seasons each year.

EH: I believe that art is highly subjective. As an audience member, I personally prefer to walk away from a play thinking about what I just experienced, discussing what I experienced with others and learning about their perceptions of what we just saw together. I don’t really believe in wholly universal experiences; there is an element of universality in some works of art, for sure, but everyone brings his/her/their own perspective, history, and experience to any situation, meaning that it’s always filtered through an individual lens… I don’t want to be spoon fed, and I don’t want to be told what the art is “about,” because what it’s about for one person can be completely different than what it’s about for the person sitting next to them. In turn, I like making theatre that leaves an audience with questions — gives them the space to wonder about what happens next in these characters’ lives — allows them to engage their empathy and their imagination to come to their own conclusions.

She Rode Horses Like the Stock Exchange runs April 20 through May 7 in the Carsen Theatre at the Dairy Center for the Arts, 2590 Walnut Street in Boulder. It’s running in repertory with Goddess Here Productions’ presentation of Testament of Mary so times vary depending on day. Visit thedairy.org or call 303.444.7328 for tickets and information.