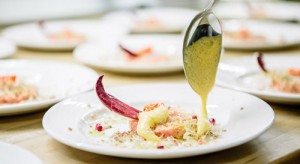 This finishing touch to a dish at Frasca Food and Wine.

James Beard Award honors two Boulderites
The annual James Beard Foundation Award semifinalists have been announced and two Boulder restaurants made the prestigious list. The awards, often referred to as the “Oscars of Food,” are one of the highest honors a chef or restaurant can receive. Erik Skokan, owner and founder of Black Cat, is in the mix for Best Chef. Frasca Food and Wine is up for Outstanding Restaurant. Both mentions are exciting honors for the restaurants, chefs and the Boulder food scene in general. The 2017 awards gala will be held at Lyric Opera in Chicago on May 1.

Button Rock Bakery reopens in Lyons
On the site of what used to be Indulge Bakery in Lyons, Tony and Jamie Lachel have reopened their bakery — Button Rock Bakery. The popular bakery has been based out of Lyons for three years, but this new storefront will give the cakes and cookies plenty of great floor space to show off just how scrumptious they can be. The same staff of bakers and decorators has taken up in the new location, bringing a menu of fresh breads, sandwiches, cakes and even some gluten-free options. Named for the nearby Button Rock Trail, this new location for Button Rock Bakery is an exciting addition to the Lyons community.

Ethiopian restaurant expands to Lafayette
In another local expansion, Boulder’s Ras Kassa’s, which has been serving authentic Ethiopian food to the community since 1988, has a new location in Lafayette. You may know the original location in Boulder at the Broker Inn, which serves as a take-out and catering location only. However, this new spot includes an eat-in restaurant in Lafayette on South Public Road. The Boulder take-out location closed temporarily to help get the new Lafayette spot up and running, but both are expected to be open in early March.

Baseline Whole Foods closes its doors
Whole Foods recently announced plans to close nine locations nationwide, including one in Boulder. The location on Baseline Road was scheduled to close with the rest of the locations this spring, however other factors forced the company to shutter the doors February 26. In an interview with The Denver Post, company spokesperson Betsy Harden explained, “We feel like we’ll be able to offer our customers the best shopping experience at nearby stores. We were able to place all of our team members who wanted to stay on with the company at other locations nearby — this lets them get to work a little sooner at their new stores, as well.”