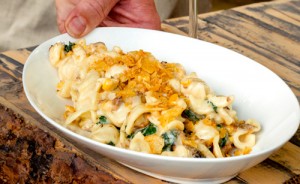 A well-executed take on an American staple.

Is there anything more comforting on a cold, wintry day than a warm bowl of macaroni and cheese?  It’s a comfort food that crosses all regions, ages and types. It’s a dish you can count on — whether it’s from a blue box or that same recipe mom used serve once a week after school. One bite of the creamy, smooth, cheesy concoction and you can instantly transport back to those carefree days of playgrounds, homework and softball practice. It’s a nice escape from modern-day worries, at least for the 10 minutes it may take to gobble up a bowl.The History of The Mac

Though the exact origin of macaroni and cheese is unknown, many attribute it to Thomas Jefferson. The earliest known recipe for the dish dates back to 1769 where, according to the Smithsonian, Thomas Jefferson brought the recipe back from a trip to France and he served the dish as President at the state dinner in 1802. With the dawn of packaged food, Kraft launched its famous blue box dinner in 1937 for a whopping 19 cents.

Kraft’s version sold more than eight million boxes within just one year, getting a boost in popularity from the meal rationing of World War II, when staples like meat and dairy were hard to come by. The dish has seen a resurgence as creative chefs all over the world put their own spin on this traditional delicacy.

There are lots of spots in the area to fill up on a bowl of your favorite comfort food. Take, for example, The Twisted Noodle in Longmont. This newer restaurant is a tribute to all things pasta, so the menu wouldn’t be complete without a mac and cheese dish. Its Twisted Mac ‘N’ Cheese uses cavatappi noodles instead of the traditional macaroni for a spicy, creamy blend of Asiago, parmesan and cheddar cheeses with a hint of smoky bacon.

Backcountry Pizza and Tap House is known for great pizza and beer, but it also has a fascinating twist on the traditional mac and cheese. The Mac and Cheese Wedges are part of the appetizer menu, and you’ll get a basket full of these little fried wedges of macaroni and cheese. The outside is a crispy batter, inside a creamy wonderland of cheese sauce.

Another great local hot spot offering up their own spin on comfort food classics is River and Woods in Boulder. The menu there is sourced from local recipe submissions and you can actually submit your own family recipes to receive River and Woods’ own star-chef treatment. “People can go on our website and submit a recipe,” said Josh Dinar, Owner of River and Woods. “They’re family recipes and people will tell us what it’s meant to them, what is special to the recipe itself, and then the chef will play with it a bit — for formality and locality — and we share the stories on the menu as well.”

The mac and cheese dish at River and Woods is called Aunt Penny’s Mac and Cheese and it was submitted by a patron whose Aunt Penny would make the classic dish for all the big family gatherings. “We took it and messed with it a bit to make it more restaurant friendly,” said chef Daniel Asher. “But the core of it is Cougar Gold, which I had never heard of until this recipe. I did research on it, and it’s only available through the Dairy Program at Washington State University.” The unusual cheese is actually sold by the can, as Chef Asher explains, “At the time it was created, the technology didn’t really exist other than encasing cheese in wax for shipment. So they decided to experiment with canning and it was extremely successful and iconic. So successful, in fact, that when the technology came around to package other ways of shipping cheeses, they decided to stick with the canning method.”

Today, Asher still orders his cans of Cougar Gold directly from Washington State University. He pairs that cheese with other American cheeses, including Two Year Aged Cheddar from Grafton Village Cheese in Vermont, a gruyere from Jasper Hills and the Flagship Reserve from Beechers Handmade Cheese in Seattle. “So we are featuring a beautiful variety of artisan American cheeses and they play really well together. Obviously, you combine these cheeses that stand well on their own and sometimes you get flavors that get lost among each other, but I feel that we created this really rock-star base for the Mac and Cheese.”

No matter how you treat it, macaroni and cheese will always remain one of the biggest stars of the comfort food menu. It’s classic, iconic and an important piece of the American cuisine landscape. Asher cited the dishes’ strong ties to childhood. “It’s one of the iconic maternal type of dishes in the chaos of childhood and growing up. Mac and cheese is playing after school. Or it’s going outside and getting in trouble or playing with friends or exploring some imaginary realm.”