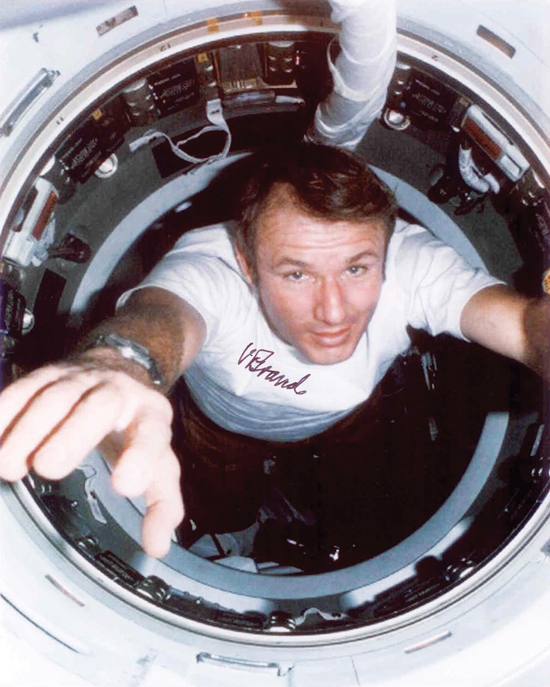 He has logged 746 hours in space and 9,669 flying hours. He’s commanded three shuttle missions and won countless awards for his service and work with NASA and space exploration. He has an airport named after him. Vance Brand’s career has literally taken him around the world and back again, but his roots have always been here in Colorado.

Originally from Longmont, Brand attended the University of Colorado Boulder for a business degree. After graduating in 1953, he enlisted in the Marine Corps until 1957. His time at a base in North Carolina introduced him to jet fighters, and he was instantly hooked. “I would watch them take off every day at breakfast, and I just thought I’ve got to do that,” Brand remembered. “It wasn’t anything but an emotional desire to fly jet fighters.”

Brand developed a love of flying during his time in the Marine Corps and continued working as a civilian test pilot with Lockheed Corporation until 1966. That year, Brand was selected as a crew member testing the prototype Command Module, part of the Apollo Command Service Module that helped land astronauts on the moon three years later. “It was very exciting, we were breaking new ground. At the time I was in, space flight was fairly new. Each mission I like for different reasons. It’s sort of like asking ‘Who is your favorite child?’ Each one is different, and you love them in different ways.”

Brand flew on four space missions: the Apollo-Soyuz, STS-5, STS 41-B, and STS-35. He was also a support crewman for Apollo 8 and 13, one of the tensest missions during that period. “I got to experience the excitement of that period. Everything we did we were learning for the first time. How to do space walks, how to dock, everything. Those were experiences of things we were refining. Now that’s all taken for granted.”

Brand reflected on Skylab’s first manned mission in 1973. He thought back to the conversations and concerns about how they would work through the challenges of keeping astronauts in space for even a month. Today, many missions have far surpassed that. “Now we have people on the International Space Station for a year or more sometimes. I think the advances have been tremendous,” Brand said.

Brand’s first space flight was on July 15, 1975. He worked as the Apollo command module pilot on the Apollo-Soyuz Test Project mission. The flight resulted in the historic meeting in space between American and Soviet astronauts.

Of all his experiences, the perspective of earth from space is the one that stays with him the most. “I remember my first impression of seeing Earth from orbit. It only took 90 minutes to go around the Earth, but you would see things you read about and heard about,” he said. “I remember looking down on Egypt and Cairo and the Nile. I just remember the road going from Cairo to the pyramids, and the contrast of vegetation and brown sand. Seeing all these things I’d heard about for the first time was special.”

Brand’s book, Flying Higher and Faster, is a collection of short autobiographical stories, as well as reflections on the future of aviation and advances in space exploration. He’s hopeful about the progress that’s been made thus far, and feels excited to be a part of it all. He hopes that future generations heed his message of prioritizing space research in whatever form it becomes. “It may not be much bigger in our lives, but in our children’s and grandchildren’s lives it will be important. In decades and centuries to come, if we don’t do it, somebody on Earth is going to go deep into space and learn how to explore and even possibly inhabit planets like Mars or moons of planets. I think that’s important because humanity is going to be a spacefaring humanity eventually.”

View all posts by Kaley LaQuea →