Celebrating the Craft of the Summer Brew 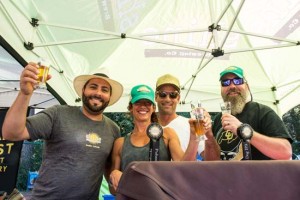 If Napa Valley brings to mind images of long-stemmed glasses, stomping grapes and wine tastings, than a mere mention of Colorado should conjure pictures of hops, barrels, yeast and grain. As one of the biggest centers for craft beer in the country, Colorado has become a destination for brew-lovers from all over the world, and Boulder County is certainly no exception. The fourth annual Boulder Craft Beer Festival is approaching this summer and there is a lot of excitement brewing over this relatively new – but largely attended – Colorado Beer Festival.

“I’ve heard it called the Napa Valley of Beer before. I think that’s really true,” offers Anna Salim, Vice President of Events with the Downtown Boulder Partnership, the sponsoring organization behind this annual festival of all things beer. “It’s just a good environment for craft breweries. People are really interested in craft beers. We have more than 30 craft breweries in Boulder County, so there is a great interest in craft beers and breweries. The brewers are very community oriented and it creates cooperation within the community as well.”

“We have such a great outdoor culture here in Colorado and I think that contributes greatly to craft beer,” offers Eric Briggs, Co-Owner of Liquid Mechanics Brewing Company, one of the attendees at the festival. Though they haven’t officially decided on which beers you’ll be able to sample that day, you just might be able to get a taste of the multiple award-winning Imperial Porter, which took home the gold at the 2016 U.S. Beer Open. “Though, the Brewers Association being located in Colorado must certainly have a lot to do with the craft beer following in Colorado as well.” The Boulder-based Brewers Association offers many resources for craft brewers – from the smallest and newest to the most established – and the Boulder Craft Beer Festival is another great way to get to know the other brewing professionals in the community.

New this year – the festival is featuring some local cider companies, including Colorado Cider Company, Stem Ciders and Wild Cider. However, the beer, of course, is still front and center in this community-focused celebration.

On August 19 at North Boulder Park, you’ll find more than 25 different local breweries, all offering up samples of their best brews. Popular favorites like Avery Brewing, Boulder Beer and Oskar Blues Brewery are joined by some up and coming brewing locals. “I always like seeing the great locals – Avery, Boulder Beer, our downtown breweries like Shine – but this year I’m excited to see breweries from outside (the Boulder area,” offers Salim. “Everybody knows Avery, but maybe no one heard of Crooked Stave before. It’s kind of fun to bring in new people outside of Boulder County to show awareness and give them an opportunity to show off a bit.” So if you’re unfamiliar with local brewers like Finkle & Garf, Asher Brewing Company or Mama Bears Brew, then you’re in for a fun beer-tasting adventure.

In addition to the beer samples, the producing team at the festival has organized the perfect music accompaniment for the event. Just as the Boulder area has a great craft beer following so, too, does it have a big Blues and Bluegrass scene. Blues trio The Red Petals will be playing earlier in the day and jam-grass/Americana band Wandering Natives hit the stage in the afternoon/evening. Live music, plenty of beer, plus several great local food trucks will round out the entire festival at the new, larger location for the annual festival – North Boulder Park.

If you’re not a big drinker – that doesn’t mean you can’t head out to enjoy the food, music and other fun throughout the day as well. “We also do a Designated Driver Ticket, which we sell in advance. It’s $10 and in exchange we give you a $10 food voucher, so there are plenty of people who don’t drink beer, or don’t drink, but would still like to come and enjoy it with their friends, and also we’re thinking of people getting home responsibly which people really appreciate,” says Salim.

If you’re thinking about travel to Boulder to partake in this popular annual festival, you’ll want to pick up tickets ahead of time, as the event has sold out every year so far.

“We usually sell out the tickets so I urge people to get them early so they know they can get in. People really like our VIP option and there are a limited number of those available, but the big thing that is great about that is you get to come in early and it gives you more time. You’re not in such a hurry to try all the beers, so you really get to take your time and enjoy it” Salim explains.

VIP Tickets are $50 per person in advance or $60 per person the day of the festival. The VIP tickets include early admission, a souvenir item and some extra samples from participating breweries. General Admission tickets are $35 in advance and will go up to $45 the day of the event. Whether you’re looking to get a taste of the many different local breweries, or if you’re a designated driver just looking for some alcohol-free fun, tickets are available at boulderdowntown.com.