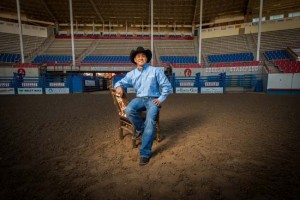 Colorado has a knack for preserving its western heritage in some pretty unique ways. Whether it be through the careful conservation efforts of protecting its old mining ghost towns, educational programs initiated through the National Western Stock Show or even through the grit, glamour and glory of a rodeo themed festival, Colorado is proud of its western spirit. One of the most historically relevant traditions that serves this objective in our state is the Greeley Stampede. Dating back to the 1800’s, the celebration grew to become the largest fair in the world by the dawn of the 20th century. The event today gathers hundreds of thousands in attendance and its organizers work tirelessly each year to give back to their surrounding community. Yellow Scene spoke with the Stampede’s General Manager, Justin Watada, to get some perspective on what the Stampede stands for in Colorado today.

Yellow Scene: How did you first get involved with the Stampede?

Justin Watada: I kind of fell into it. This is actually going to be my 12th Stampede coming up here. I came to school up here in Greeley at UNC and was working at a local restaurant, Old Chicago, which at that time was a big sponsor of the event and that’s how I got to know the executive director who hired me at that point as the director of sales. So, I first started by selling tickets and doing group sales in our ticket office. I did that for a couple years and then just kept moving up. I did the Director of Marketing and left as the Assistant Director for about three years and worked for the local school district which was actually a great blessing in disguise. I got away and saw the Stampede from a new perspective and they asked me to come back as my current role as General Manager. We kind of joke around here that there’s not too many Japanese cowboys around our events. Never growing up did I think I’d be working for a rodeo but it’s a great job. When the Stampede is in full force, to go out there and to see how many people enjoy the Stampede and how it’s such a big tradition, it’s a prideful thing to be apart of.

YS: What are some things you enjoy most about being the General Manager?

JW: The biggest deal is that the Stampede is still a community event that we try to give back to the community as much as possible. There’s a lot of organizations that rely on the Stampede every year, as there are big fundraisers for other projects as well as our Stampede foundation that gives out scholarships to graduating high school seniors. So, it’s important for me to give back to the community and this is one way that we are able to put on a great event that provides affordable family fun for people to come out and have a good time.

YS: How do you think the Stampede continues to help shape the culture and heritage of Greeley?

JW: I think it’s going to keep moving forward with how it got here and that’s with our volunteers. So, this is going to be our 96th Greeley annual event and it started off with volunteers and that’s really the backbone of our event. That’s our board of directors and they set our policies and budget but they also spend a lot of time throughout the year and not just the month of June to help put it on. Our wranglers are about 350 strong with volunteers and some of them take their two week vacation from their actual job and come out here to put on the event.

YS: How are you going to shape this organization to continue providing a service for Greeley?

JW: We try to be a great partner with the city of Greeley and Weld County. Last year we finished up a $1.3 million restroom project that we then donated back over to the city as a Capital improvement. So we’re trying to do a lot of those projects down the pipeline. We have started to lay the groundwork of what we want events to be as far the next couple years through our ticket sales.