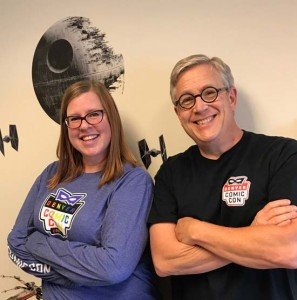 On any normal day, it is commonplace for the average American citizen to become absolutely inundated in a world of pop culture. Many of us experience it before we even leave our homes. The movie posters that line our walls and television programming reverberating throughout our living rooms serve as just a few examples of its many manifestations. Pop culture is so prevalent in our country that it is a core aspect of our collective identity. This isn’t a bad thing though. Everybody in some way, shape, or form has their own fantasies of relating to something or someone that is outside the realm of tangibility.

Through pop culture, Individuals have the opportunity to learn more about themselves, society and what it means to be a human being. It is part of the reason why so many of us love action movies, romance novels, superheroes, fashion shows, videogames and comic conventions. The last-mentioned on the list is perhaps one of the more resounding and praiseworthy outlets for pop culture to be expressed on a massive scale. Denver Comic Con in particular has earned a legacy that has drawn the attention from people all around the world, including several nationally recognized celebrities and much of the mainstream media.

Seven years ago, a Colorado charitable organization known as Comic Book Classroom established a mission to advance student’s learning through comic book media. During this time, the founders of Comic Book Classroom- Charlie LaGreca, Frank Romero, David Vinson and Kevin Vinson went on to create Denver Comic Convention. Shortly after the opening of the convention, accomplished educator Christina Angel joined the founding team and today holds the role of Convention Director. The instructional value embedded in the event is a core component that resonates deeply with Angel, who aims to continue its tradition of inspiring education through art and pop culture.

“I have an education background. I have a Ph.D. in literature and am a professor at Metro State University. I became involved with the organization initially because of that background. For 15 years I taught pop culture and literature at a university level,” Angel said. “The thing that is most important to me has been education and literacy and that’s the singular driving force behind what it is that we do.”

Angel’s vision of fostering a development for greater knowledge is an integral part of the fabric that makes Denver Comic Con so successful. She is responsible for a majority of the services provided by the conventions charitable organization, Pop Culture Classroom. The institution helps school students through alternative avenues for learning and character development.

“We are educationally driven. For us it’s not just that people are included, but they also have the opportunity to see the value of pop culture as a learning device, as a literary device and that is what we do the other 362 days a year. We focus on education and educational programs,” Angel said.

As the educational programs continue to evolve each year, so does the capacity in their attendance. For example, between the years of 2015 and 2016, Denver Comic Con saw an increase of 13,400 attendees. The annual staggering growth in attendance highlights an element of the event that traces back to the conventions inception. These results reveal that the overall fondness for pop culture is expanding with the conventions end goal centering around enlightening the surrounding community.

“I don’t plan on going anywhere. We plan on continuing to build a show and to make it better every year, to keep bringing new and fresh ideas into the world of education and to bring that to the attendees at our show,” Angel said. “I think that the popularity of Comic Con across the country is certainly at an all-time high, I don’t predict that it will entirely last, but I have a feeling we’re going to weather that storm because we pride ourselves on having a unique event that is unique to Denver.”

Angel is not alone in this admirable and scholarly goal that continues to influence thousands. She is teamed with a core group of educators, dreamers, movers and shakers who altogether aim to make the state a more interesting and smarter place.