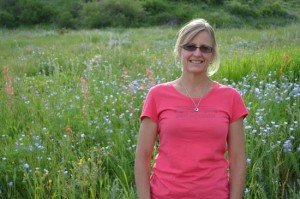 One easy way to identify the approach of the summer season in Colorado is when the hills of the Rockies blossom into an explosion of color.

There is arguably no better place to witness this magnificent botanical transformation then in Crested Butte. For over three decades the town has been recognized as the wildflower capital of the state and continues to uphold its reputation through the annual Crested Butte Wildflower Festival. Now approaching its 31st year, the celebration attracts visitors from all over the globe and offers opportunities for its attendees to learn more about the preservation of the flowers and methods to sustain the healthy ecosystem. The festivals purpose expands beyond creating a way to stop and smell the flowers. It’s an event that aims to raise awareness and promote education. It’s a responsibility the events staff takes very seriously.

Michelle Bivens is the Program Director for the festival and her role is vital in helping maintain an appropriate attraction for its visitors. Bivens began her working relationship with the festival three years ago. She initially served on the board of directors, then moved up as the board president until reaching her current title in March. However, Bivens’ roots with the festival stretch back to her early days of childhood.

“We started coming here as a family when I was six or eight years old. My dad and I used to walk and we had our wildflower books checked out from the library and we’d go and find flowers,” Bivens said. “I’ve always loved flowers and have deep roots in the area with some of the vacations that we took as children and never really gave any of that up. I’ve always been a real big gardener wherever I’ve managed to land.”

A key component to the organization and leadership that Bivens demonstrates today revolves around her values of conservation and educational outreach. Each year Bivens helps supervise over 200 events during the course of the summer primarily during the festival week which takes place July 7 through July 16. This also includes some pre-festival and post-festival events with everything concluding by the end of August.

The exponential amount of hosted events over the course of the festival season sparks a challenge for Bivens and the festival staff who collectively encounter thousands of visitors each year. Managing over 200 events during the two month period creates a demand for careful budgeting of resources as well as sufficient staffing in order to fulfill these requirements.

“I think our biggest challenge has been trying to staff the festival appropriately as it’s gotten bigger and bigger. It was just a part time executive director ten years ago that was all that was really allocated to the festival. I think some of the challenge is to figure out how to divide the resources between execution and the fundraising piece, the development piece, the leaders and really just trying to wrap your hands around all of that,” Bivens said.

The massive turnout reveals the popularity of Crested Butte’s annual tradition but presents a difficulty in Blevins and her team’s duty to protecting the neighboring environment.

“If we’re attracting people to the valley and we’re showing them these beautiful things in nature, it’s teaching them how to take care of it so that they don’t come and drive over fields of wildflowers or trample trails while they’re trying to take the perfect picture,” Bivens said. “So that has been a challenge and we’re working on that with a stewardship component this year called Mountain Manners.

That’s been very well received locally and we’ll have some statistics after this summer about how well that has worked out to see if it actually has made any impact.”

Organizers and citizens of Crested Butte are proud of their local fauna. As a result, the town is adamant about teaching outsiders about wildflower etiquette. While it may be unbeknownst to some tourists who are traveling through the Colorado Rockies for the first time, it is illegal to pick wildflowers in the state. This rule includes places outside of the meadows and open fields. Individuals who are seen picking wildflowers on the side of the highway will be subject to the same penalties as those who pick within mountain territory.

The enticing beauty of the flowers is something that should not be taken for granted. Educating people on this notion, while offering others the chance to experience it is part of what comprises Bivens’ life’s work.

“People in Colorado are used to seeing wildflowers. Whether you’re on the front range or Grand Junction or wherever. It’s really unique geology that’s different than other places that allows the flowers here to be on steroids,” Bivens said.

The same sense of wonder Bivens encountered as a child amongst the flowers hasn’t seemed to deteriorate. Her impact she makes for the festival, the town and the native plants has manifested in the form of the natural elegance surrounding the mountain valleys in Crested Butte.